When ‘The Bachelor’ offered Chris Lambton money and fame, he did the unthinkable -- he said no thanks 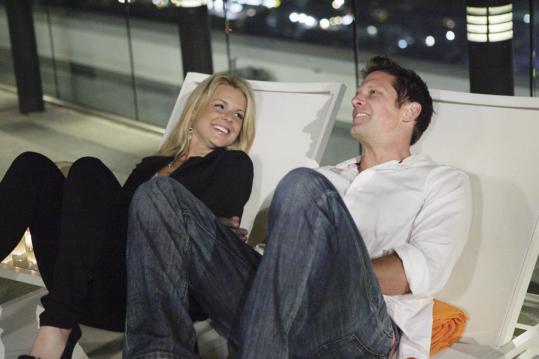 A second-place finish on "The Bachelorette'' (with Ali Fedotowsky) gave Lambton the starring role in "The Bachelor,'' but he declined. (ABC via Getty Images)
By Meredith Goldstein Globe Staff / December 23, 2010

DENNIS — Chris Lambton is waiting for his sandwich at “The Merc.’’ With him are his girlfriend, his father, and one of his brothers, all of whom are layered in landscaping gear and winter hats. It’s a typical day for Lambton — no autographs to sign, no women in bikinis to choose from. It’s exactly what Lambton hoped life would be like after his stint on “The Bachelorette’’ ended earlier this year.

“Chris! Your sandwich is done!’’ the Mercantile’s owner barks when Lambton’s order is up. They all know Lambton by name here, but not because he was on television. The owner, Meagan Lambton, is his sister-in-law.

“Coming, dear!’’ Lambton yells with some sarcasm, quickly running to the counter to grab his food.

Lambton, 33, wasn’t supposed to be on the Cape this season. In August he placed second on the reality dating show “The Bachelorette,’’ losing the heart of Williamstown native Ali Fedotowsky to South Carolina insurance agent Roberto Martinez.

As runner-up on the show, Lambton was groomed to be the next star of “The Bachelor,’’ meaning he’d get to choose his soul mate from a pack of doting women.

But when the time came to sign up for his second reality gig, Lambton hesitated. Then he did what few reality stars ever do: He said no.

He didn’t like how “The Bachelorette’’ had portrayed him, as an always-sweet, good-guy character known to fans as “Chris L.’’ He felt that ABC focused too much on the death of his mother, Marjorie, who in 2008 succumbed to multiple system atrophy, a neurological disorder similar to ALS. He says the show didn’t focus on his years of teaching in New York City schools or his sarcastic sense of humor. He was just that nice guy whose mom had died. He acknowledges that he shouldn’t be surprised — it’s reality television, after all — but he had had enough.

Once ABC realized that Lambton wasn’t a sure thing, the network began a hard sell to keep him. Execs promised him that they’d keep his family close by and that he could choose the location of the vacations he’d take with his potential mates. (ABC declined to comment for this story and told the Globe that Lambton was unavailable as well.)

According to Lambton, ABC upped its initial salary offer (he wouldn’t say how much, but another insider said it would have been in the mid six figures). It took Lambton more than three months to give ABC a final answer, finally letting the network know in September that he wanted to go back to his real life.

Talk about playing hard to get.

A supportive family Lambton is back in Dennis running the E. Lambton Landscaping company with his brother Erik. His 61-year-old father, Ed, a prolific poet and former English teacher, works with them. Chris’s brother Mark, the general manager of EOM Offshore in Woods Hole, lives nearby. Chris is close with both of his sisters-in-law, Meagan and Sara. He lives with his father on scenic Corporation Road.

“My family’s great,’’ Lambton says. “They said, ‘If you do it, great.’ They were going to support me either way.’’

On a recent afternoon, after visiting the Merc for lunch, Lambton travels around town with Erik on a few end-of-season jobs, raking the last of the fall leaves before the snow starts. Later, Lambton will spend quality time with his girlfriend of several months, a tall, blond woman from Texas. Lambton doesn’t want to disclose who she is — he turned down “The Bachelor’’ so he could fall in love in private — but it’s safe to say that he met her because of his participation on the show.

“I don’t want to put my love life out there,’’ Lambton says, shaking his head. “People from 6 to 96 watch this show. The extent of it blows me away.’’

A savvy reality show fan can probably identify Lambton’s girlfriend with some good Googling. She had her own television experience and now has similar feelings about the reality game. Lambton plans to spend a few weeks with her over the holidays in her hometown.

Lambton’s father says that finding this woman is one of the reasons Chris can’t regret doing the show. Despite the negatives that come with notoriety, it was a good experience for the family, and for Chris in particular, who in 2009 was still reeling from the death of his mother.

‘Love is the only reality’ It was one of Chris’s clients, a New Jersey woman who summers on the Cape, who got him on the show. She was shocked that her favorite landscaper was still single and convinced him to let her submit his name for the sixth season of “The Bachelorette.’’ Chris knew of the series, but had never watched it. He had no idea what he was in for.

“The whole thing was just so serendipitous,’’ says Chris’s father. “And it came upon the heels of such a grave loss for the family.’’

Ed Lambton also became a memorable character on “The Bachelorette.’’ During Fedotowsky’s “home visit’’ with Lambton, which included time with the family, Chris tells her while touring his scenic family property that his father used to tell his mother, Marjorie, that “love is the only reality.’’ Ed Lambton’s quote became a much-blogged, unofficial tagline for the series. Even Shaquille O’Neal, who was still in Cleveland at the time, tweeted the phrase to his 3 million followers.

As Ed sees it, his son’s notoriety has enabled him to do some good. Chris has helped raise thousands of dollars for local causes, including the Franciscan Children’s Hospital, the NOAH Center in Hyannis, and Compassionate Caring ALS, an organization that helped the Lambtons during Marjorie’s diagnosis. The Lambtons sell their company T-shirts to raise money for the group. CCALS’s executive director, Ron Hoffman, says Chris has become somewhat of a celebrity spokesman, participating in walks and runs.

“It’s — what’s the word I want to say — incredibly touching. There were people at the walk we did in Connecticut who came to see Chris. It’s pretty extraordinary.’’

Hoffman adds: “It’s not like he gets a pretty big head about any of this. There’s such incredible authenticity in this family.’’

Adoration, near and far As far as the fans go, it’s a mixed bag. Lambton’s season of “The Bachelorette’’ continues to re-air, debuting in country after country. It just ended its run in Norway. That means Lambton gets waves of international mail.

The Americans also haven’t forgotten him. He keeps a plastic tub filled with fan mail in his kitchen. There are love notes from single women who’ve lost parents. Mothers have sent him notes about their single daughters. There are trinkets, such as a rock engraved with the phrase “Believe in miracles’’ and mix CDs, such as one labeled “The Hopefully Make You Smile Mix’’ that included songs by Rihanna and the Beastie Boys. “Some really good ones, actually,’’ Lambton says, laughing. “I listen to them.’’

His brother Erik says the adoration is fine when it comes in the form of mail. It’s harder to take when people drive by the house or approach Chris in public, he says.

“They would just come up talking to him like he’s there for their amusement,’’ Erik says, grinning as he remembers the first time that he watched Chris get mobbed. Over the summer, while the show was airing, the brothers had run down to the nearby Corporation Road beach for their morning swim. Someone in the water quickly recognized that Chris was “Chris L.’’ from “The Bachelorette.’’ Suddenly the brothers were surrounded.

“It was like there’s a dead seal on the beach or something,’’ Mark jokes.

“Next thing I knew, people are coming up to me with babies,’’ Chris adds. “They were handing me babies,’’ he says, laughing.

What might have been Chris doesn’t know whether he’s the first person to turn down “The Bachelor,’’ but he suspects he is.

He admits that he might watch when the new season premieres Jan. 3 — with Brad Womack taking his place in the throne — partly because he suspects that the women chosen as contestants were cast with him in mind. “One of those women could have been my wife,’’ he says, looking a bit skeptical as he says the words.

For a moment, he considers what these past few months would have been like had he allowed the cameras to follow him and his family as he searched for a partner.

Smiling wide, he says confidently: “It would have been good TV.’’