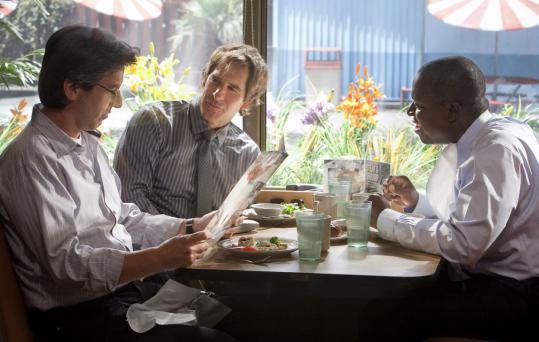 Danny Feld
From left: Ray Romano, Scott Bakula, and Andre Braugher face new midlife challenges, but continue their breakfasts at the diner, in the second season of “Men of a Certain Age.’’ (Danny Feld)
By Matthew Gilbert Globe Staff / December 6, 2010

‘Men of a Certain Age’’ is a bit of a freak. It’s a drama but it stars and was created by a lightweight sitcom actor (Ray Romano); it’s all about men but airs on a cable channel (TNT) that tends to pursue women (“Rizzoli & Isles,’’ “HawthoRNe’’); and it zeroes in on midlife despite the TV industry’s fixation on young viewers. In the dog park of American television, “Men of a Certain Age’’ is a rather unusual mutt.

And a lovable mutt, too. The first season, which was 10 episodes, took me completely by surprise. On paper, the whole thing sounded unbearable — Romano hang-dogging his way through bromance cliches with costars Scott Bakula and Andre Braugher, whining about getting soft in the middle when his life is so hard. But the series turned out to be a moving piece of work, a portrait of that queasy moment in life when you feel both the power of wisdom and the sorrow of resignation. And Romano revealed dramatic chops no “Everybody Loves Raymond’’ fan could ever have seen coming.

“Men of a Certain Age’’ returns tonight at 10 — for only six episodes, with six more coming this summer — and it remains as strong and lovable as before. It continues to be unlike most of the rest of TV, as it dives headlong into aging and masculinity, including, tonight, an amusing moment when Romano’s Joe covertly slips on glasses for the first time to read his menu at the guys’ favorite diner. “Men of a Certain Age’’ beautifully mines these little iconic midlife moments for both mild humor and pathos — although the writers and actors also give the characters enough specificity to be more than just stock symbols of middle age.

The story lines pick up where they left off, with Joe quitting his gambling habit in a new home, despite unwelcome visits from his bookie. I love the way the bookie, Manfro — played with “Seinfeld’’-ian pettiness by Jon Manfrellotti — hounds Joe just as aggressively and persistently as Joe’s desire to gamble. Braugher’s Owen has taken over his father’s car dealership, and he has hired Bakula’s Terry as a salesman. While struggling actor Terry wonders if he can pull off a 9-to-5 job, Joe continues to worry about his teen son’s “anxiety thing,’’ as he calls it, and Owen continues to deal with his overbearing father’s intrusions.

But the plots are really secondary to the show’s winning, easy-going style and its bittersweet tone. This isn’t John Cassavetes, but there’s something of the director’s spaciously paced, slightly improvised technique about the way the men on the show interact as they take their regular hikes and breakfast at the diner. Both their banter and their confrontations have a loose, natural quality. The hand-held camerawork that follows them is only slightly jittery, just untethered enough to let Romano, Braugher, and Bakula move more freely. That gives the show the kind of realism you also find on the similarly filmed “Friday Night Lights.’’

Braugher was nominated for a supporting actor Emmy for “Men of a Certain Age’’ this year, and rightfully so. It is a treat to watch him lighten up here, and yet fall into his more familiar angry-eyed intensity when appropriate. But I also think Romano deserves Emmy notice, not just for having opened up a different side of himself on the show, but for subtly crafting a sympathetic neurotic who knows he needs to relax and let his guard down. When he accidentally lets a smirk take over his stiff face, it feels like a small victory. You can tell Joe wants to want to be happy.

MEN OF A CERTAIN AGE