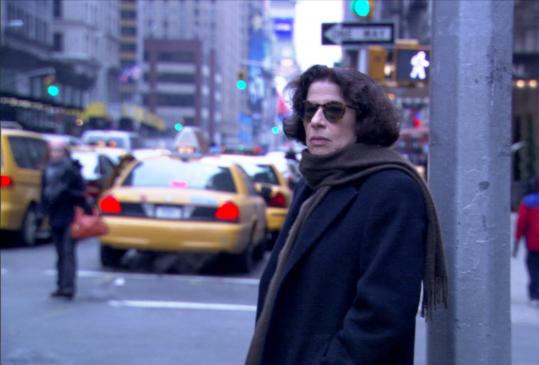 A lot of people are complaining about the dying art of speaking, now that even voicemail messages are passe, having given way to the art of texting, which is less committal and far more instant. Talk takes time, like writing letters.

“Public Speaking’’ takes time, too. This new film homage to ceaseless talker and relentless New Yorker Fran Lebowitz is an 85-minute-long stop by a rushing river of words. Lebowitz’s spigot is broken, if it ever existed. Sardonic, brash, she verbalizes her strong opinions about everything, including opinions. She doesn’t bother writing them down anymore; the author of “Metropolitan Life’’ (1978) and “Social Studies’’ (1981) labels her decades-long writer’s block a “writer’s blockade.’’

The Martin Scorsese-directed documentary, which airs tonight at 10 on HBO, is a “My Dinner With Andre’’-styled look at Lebowitz. We experience time with Lebowitz, rather than hearing about her history and getting a who’s who of her famous dinner-party pals. There are no talking heads analyzing her iconic New Yorker status and her acerbic wit; it’s all just the woman herself, talking to the filmmakers at her favorite table at the Waverly Inn or, in some sequences, talking to friend and author Toni Morrison onstage in a theater. It’s Lebowitz in her element: speaking in public, dressed in her signature suit.

Lebowitz has an unusual take on every topic she considers. She grieves the way the early years of AIDS took away not just gay artists but the all-important gay audiences; she explains why our culture needs to be less democratic; she rants about tourists and strollers on sidewalks. She talks about how Andy Warhol made fame too famous — “This is what happens,’’ she says, “when an inside joke gets into the water supply.’’ And she jokes, about the inequalities of gender and race, “Any white gentile straight male who is not president of the United States failed.’’

As a raconteur, Lebowitz has the gift of certainty. She doesn’t get wishy-washy on anything, it seems, always going for the jugular. Listening to her spouting truths, ironies, and absurdities, it’s hard not to react — sometimes in agreement, sometimes in frustration. I kept wanting to quibble with her assumptions, or challenge her conclusions. But I suspect that is the kind of reaction that has sustained Lebowitz across decades in the public eye. You have to listen, if only to roll your eyes.

Occasionally, Scorsese slips in clips of famous artists such as James Baldwin, Pablo Picasso, Pablo Casals, and Truman Capote, perhaps to break up the look of the movie, perhaps to put Lebowitz in the context of a classic cultural observer. Fascinating as those moments can be — the argument between Gore Vidal and William F. Buckley is riveting — I’d have preferred to learn a bit more about Lebowitz. Without any framing background information, this affectionate documentary and its continual monologues can feel a little too insidery and indulgent.