We know these TV men (and yes, it's always men) inside and out 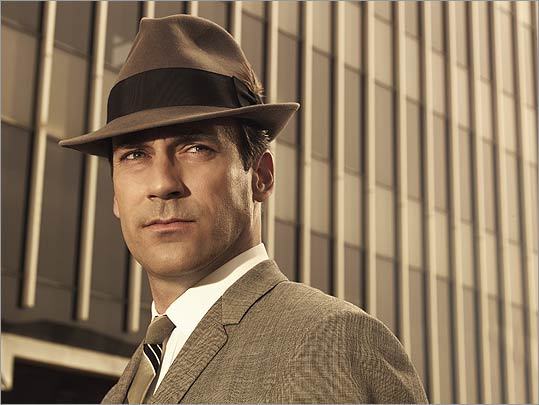 The fourth season of “Mad Men’’ ends tonight, and I feel as though I’m a therapist bidding farewell to client Don Draper.

The 2010 run of episodes has been a twisty journey into the psyche of a complex man, a long and detailed answer to the big question that opened the season: “Who is Don Draper?’’ With each new gorgeously written and acted hour of the AMC series, we’ve learned more and more about this dark survivor, a guy who always gets pushed up against the wall and always climbs out.

And we knew a lot about Don Draper already, from his childhood as Dick Whitman in the dusty shadow of America’s heroic myth to his rebirth as a sleek ad man and master of seduction. Don is one of the TV characters whose deepest inner life has become an open book for viewers in recent years, one of the characters we get to know sometimes more intimately than our friends and family. Played by Jon Hamm with effortless realism and power, Don Draper is in the pantheon of psychologically revealed TV men that includes Tony Soprano, Dexter Morgan, and Gregory House. We see these guys from the perspective of a therapist — we learn their well-kept secrets, we hear their dreams, we find out about their sexual issues.

Before each hour is up, we’ve won further access to their souls.

The amazing thing about TV’s open-book characters — and they also include Dr. Paul Weston of “In Treatment,’’ Tommy Gavin of “Rescue Me,’’ Walt White of “Breaking Bad,’’ and possibly newcomers Raylan Givens of “Justified’’ and Nucky Thompson of “Boardwalk Empire’’ — is that we can analyze them in the way we might dissect real, autonomous individuals. They’re that vividly written and acted. Why is the precise Dexter getting sloppy when he kills on “Dexter’’? As an adult child, is he finally feeling his early rage and guilt? Why did Don Draper fall into a post-divorce downward spiral — the uber-theme on this season of “Mad Men’’? Is he reliving the abandonment by his mother? These are the kinds of questions we can obsess over, in conversation and online, based on our familiarity with the corners of these characters’ conscious and unconscious minds.

I don’t recall understanding any movie character with quite the same amount of detail and dimension. These extended forays into character are one of TV’s greatest narrative strengths, and more akin to books than the similarly visual medium of movies. Serial TV has the commodity of time — from 12 to 22 hours a year — to let a character unfold in both mundane and philosophical ways, to allow a character to be brave one week and cowardly the next. Across the seasons, men like Draper and House become as ambiguous and contradictory as most human beings, which is why Denis Leary’s Tommy can be both a drunken idiot and a life-saving saint. They change incrementally, too, like Bryan Cranston’s Walt on “Breaking Bad,’’ who has evolved from nebbish to hero to ruthless creep since 2008.

Watching Don Draper deepen from the debonair fellow with a Brylcreemed helmet into a rudderless mess with vomit on his shirt has been one of TV’s most extraordinary experiences. Just as the repressed 1950s have faded into the openness of the mid-1960s on “Mad Men,’’ Don’s hard exterior has become more permeable. We see him bouncing from woman to woman like an anarchic pinball, his only safe relationship — uncharged by Freudian impossibility — being with his office wife, Peggy Olson. One of the series’s finest episodes this season had Don shaking off denial and falling apart upon his best friend Anna’s death — with Peggy there to pat his back.

My vision of the future of “Mad Men’’: A firm called Draper Olson.

TV’s analytical gaze has grown markedly more sustained since “The Sopranos’’ ushered in the cable drama revolution in 1999; more penetrating, too, thanks to the looser, less polite standards outside of network TV. But I first noticed TV diving into thorny character drama in the mid-1990s, when ABC’s “NYPD Blue’’ delivered the spectacularly flawed Andy Sipowicz, played with such a complete lack of glamour by Dennis Franz. A walking quagmire of racial bigotry, homophobia, and romantic turmoil, he wasn’t just another slobby network TV cop who wore a wrinkled jacket but always solved the crime. He was irritating, self-destructive, and sad, too — he embodied the blue of the title, since he was both a cop and depressed. Within his bluster, we saw a spark of humanity, which eventually prevailed over his hatred and fear.

But Sipowicz was almost a superficial characterization compared with Tony Soprano. Like “Mad Men,’’ “The Sopranos’’ had a large cast with subplots of their own; but ultimately, the show was all about the man at its center — his broken masculinity, the enduring damage of his bond with his mother, his inability to commit, his violent eruptions, his nightmares, his cold eyes. Tony was in therapy, which was the viewer’s cue to analyze him along with his therapist, Dr. Melfi. Thanks to the visceral performance by James Gandolfini, we could see Tony as an overgrown boy looking for help. Alas, ultimately we also had to see him as a sociopath immune to redemption.

For decades, complex antiheroes such as Tony were considered off limits as the leads on TV series. Now, thanks to Tony, they are de rigueur on cable; but the networks still shy away from morally twisted-up heroes. They are concerned that viewers will turn away from intricacy and pathology — which they did, most recently, with Fox’s “Lone Star,’’ the promising portrait of a con man that lasted two episodes. “House,’’ though, has been a network exception, with the outrageously vibrant Hugh Laurie giving us a misanthropic, cruel doctor who is a genius diagnostician. Just as Sipowicz was as raw and irrational as most TV cops are cool, House is the opposite of network TV’s usual doctor — the kind with the bedside manner. An angry victim of early abuse, disabled, a drug addict trying to stay clean, he is a fascinating headache, a puzzle worth piecing together.

Some of the best pleasures on TV in the past decade have been piecing together the likes of Don, Tony, and Dexter. The puzzles don’t always look like we want them to — indeed, I don’t think Don is going to have the sweet self-realization we might be hoping for in tonight’s “Mad Men’’ season finale. And that makes them even more engrossing enigmas, as these men cling to their hidden sides (most obviously Dexter) and worst impulses while we are positioned to know all. We get to see behind the front — even with therapist Paul Weston, who must keep back his feelings with his clients on “In Treatment’’ (which returns Oct. 25). Thanks to Gabriel Byrne’s remarkable ability to withhold and reveal simultaneously, and thanks to our presence during Paul’s sessions with his own therapist, we know him more entirely than any of the other characters on the show.

So the lurking question, of course, is: What about women? While TV has found a way to conduct serious travelogues through the canyons and cliffs of the minds of men, the medium is still working toward viewing women with the same intellectual fervor. Some of the women on these shows are beautifully portrayed — particularly Elisabeth Moss’s Peggy on “Mad Men,’’ Edie Falco’s Carmela on “The Sopranos,’’ and Anna Gunn’s Skyler on “Breaking Bad’’ — but ultimately they are secondary to the male leads.

Dramas such as Kyra Sedgwick’s “The Closer’’ and Glenn Close’s “Damages’’ give us intriguing women, but women who are so steeped in genre plotting that the writers don’t have the chance to dig below the surface, to make the show primarily about character nuance. Showtime, with its half-hour drama-comedies, most notably Falco’s “Nurse Jackie,’’ has taken the most interesting steps toward that end. “Mad Men’’ is so excellent, I’m hoping TV will find a way to deliver more engaging, finely drawn, and mad women before long.

From Tony Soprano to Gregory House to Andy Sipowicz, see other TV characters we know inside and out.
Your comment is subject to the rules of our Posting Policy
This comment may appear on your public profile. Public Profile FAQ