Can 'Real Housewives' get any more unreal? Try Beverly Hills. 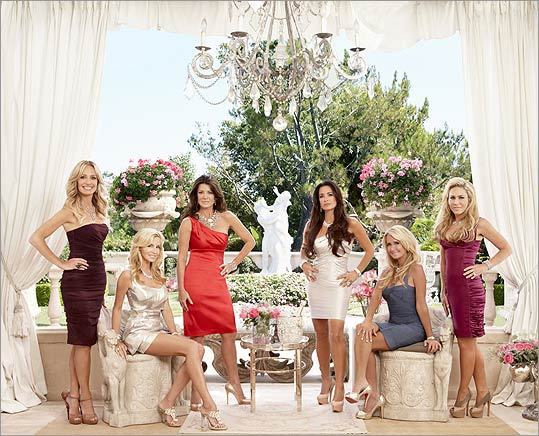 Like many people — maybe even you — I wasn’t always hooked on “The Real Housewives.’’ For a long time, my pop-culture attention span was something of a gated community, effortlessly excluding certain rabble with a barrier that signaled taste — even as it tacitly acknowledged fear.

Only 436,000 people tuned in when the “Housewives’’ docudrama franchise debuted on Bravo with its crop of plasticine Orange County unknowns in 2006. That season, aired its fabulous “Dynasty: Catfights and Caviar’’ reunion show, and “The Real Housewives,’’ at first glance, just felt redundant. Of course, that was before I, and the nearly 4 million viewers the franchise can now draw for an episode, knew how good it was. Just as it allowed us to infiltrate the exclusive residences of Coto de Caza, so too have we ultimately allowed the “Housewives’’ to infiltrate us.

With the much ballyhooed premiere this Thursday of “The Real Housewives of Beverly Hills,’’ the sixth iteration in the hit reality-show series, the franchise seems to have reached an inevitable extreme, even as it comes back to its (tortured, bleach-savaged) roots. And I’m not just referring to California.

The Beverly Hills show revels in affluence and unchecked excess. It’s everywhere, from the 19,000-square-foot French-regency “crib’’ of Adrienne Maloof, whose family dynasty counts the Palms Casino Resort and among its holdings, to the florid sprawl of a colossal empty nest owned by designer/restaurateur/skin-care maven Lisa VanderPump (yes, the name is VanderPump), to the recently de-moated oceanside 17-acre estate of ex-“Club MTV’’ dancer and model Camille Grammer (soon-to-be-ex of Kelsey Grammer).

The franchise, which has included habit-forming installments in Atlanta, New York, New Jersey, and Washington, D.C., has always offered viewers a mix of good old-fashioned socioeconomic voyeurism (a la “Lifestyles of the Rich and Famous’’) and thoroughly modern mocking schadenfreude (à la . . . any reality show explicitly set in New Jersey). But with the new show, the balance tips full-on into silicone and bling. And so it delivers an oddly refreshing sense of unattainability. After all, TV has shown us repeatedly over the years that Beverly Hills is no place for reality.

Robert Thompson, founding director of the Bleier Center for Television and Popular Culture at Syracuse University, recalls being 10 years old before he realized that Beverly Hills — as he experienced it vicariously through the Clampetts — was, in fact, a real place.

Like a Rolls Royce taken on a cross-country jag, the “Housewives’’ concept has indeed lost a touch of its aspirational luster as it’s rolled from one relatively ritzy enclave to the next. To be sure, the “Real’’ part of this reality show has always been generously encrusted with irony. Have any of these people ever even seen a soccer practice? That irony has been richly and reliably indulged by the unreal behavior of its stars: There’s the excessive on-screen spending of New Jersey’s Teresa and Joe Giudice in the face of their exorbitant $11 million debt, the rivaling addictions (wigs, cigarettes, and Auto-tune) of Atlanta wanna-be pop star Kim Zolciak, and the brazen White House party-crashing of D.C.’s Salahis. (That infamous event finally aired in the D.C. season finale on Thursday.) All of this has shown how easily our wild fantasies can downgrade into deep delusions, given the proper funding. The more fraudulent these women have revealed themselves to be, the “realer’’ they have paradoxically become. It’s discomfortingly comforting.

The Beverly Hills glamour queens, meanwhile, actually do have it all. And the conspicuously absent possibility of impending ruin does have a dampening effect: Unfettered fabulosity can be a little dull without the potential for collapse. VanderPump’s workout sessions with her ostensibly gay and seemingly permanent houseguest, Cedric, don’t seem as fraught with sexual tension as the setup might suggest. Quibbling sisters Kim and Kyle Richards — both former child stars and current aunts to Paris and Nicky Hilton — seem barely meddlesome enough with each other to generate watchable family drama. And the biggest challenges facing another costar, Taylor Armstrong, seem to be the burden of her “enormous aspirations’’ and staving off getting dumped by her venture-capitalist husband with regular injections of face-filling goo.

In the “Beverly Hills’’ premiere, a wobbly ride in Camille’s private jet only reveals Kyle’s nerves, and an uncomfortable courtside stint at a Kings game only makes clear Kim’s generic frigidity. It’s nearly impossible to imagine Taylor — who declares in a preview that a good-size party for a 4-year-old costs around $50,000 — pulling a Teresa Giudice and, say, flipping over a table at a dinner party while lambasting a guest (with glorious redundancy) for being a “prostitution whore.’’ It’s a stretch to envision any of them trying to strangle a costar, like Atlanta’s NeNe Leakes. And it’s unlikely that any of these ladies will deliver contributions to the American (Internet) Songbook as significant as Zolciak’s tone-deaf “Tardy to the Party’’ or New York socialite LuAnn de Lesseps’s club-clearing caveat “Money Can’t Buy You Class.’’ (Yes, I purposefully left out the song-thing that New York’s Danielle Staub brought into the world.)

Then again, as our national recession crawls toward its third anniversary, it could be this total and utter otherness that gives the new “Housewives’’ a fighting chance — or, more likely, several chances to fight. Will we watch whether it seems promising or not? We will. Why? Because the Housewives, with their seasons often operating as prolonged drumrolls leading up to hyper-catty finale and reunion spectacles, have taught us patience. And in the meantime, there are full episodes of “Dynasty’’ all over YouTube, just waiting to be clicked.

“Of course,’’ Thompson notes, “With ‘Dynasty’ you’d have to wait around an entire season for a decent catfight.’’

THE REAL HOUSEWIVES OF BEVERLY HILLS