‘Better’ has good times with family 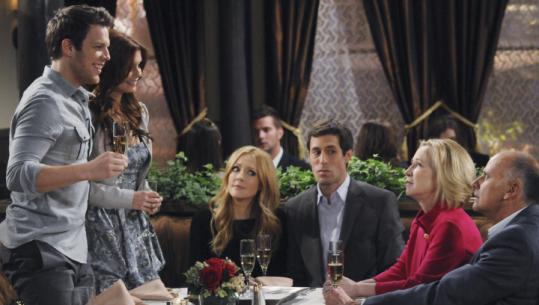 It wouldn’t be surprising if, after watching the debut of “Better With You,’’ viewers felt like they were hanging out with old friends.

Premiering tonight at 8:30 on Channel 5, the show chronicles three romantic relationships in one family. It is a six-person, multi-camera ensemble comedy from former “Friends’’ producer-scribe Shana Goldberg-Meehan, peopled with familiar faces from sitcoms past, paced by traditional comic rhythms, and providing a snarky-yet-sweet look at life and love.

But rather than breeding contempt, the gifted cast of “Better With You’’ knows how to turn that feeling of familiarity into a sense of potential. They also know how to land a joke.

The laughs are fairly mild in tonight’s pilot as we are introduced to the three couples: Flibbertigibbet Mia (JoAnna Garcia) and lovable doofus Casey (Jake Lacy) have impulsively decided to marry and procreate after a 7 1/2-week courtship. Mia’s older sister Maddie (Jennifer Finnigan) and boyfriend Ben (Josh Cooke) are appalled since they are career-driven fussbudgets who feel forced to defend their nine years of unwedded bliss as a “valid life choice.’’ But Mia and Maddie’s parents, Vicky and Joel, played by veteran TV actor Kurt Fuller and Debra Jo Rupp — whose prickly sophisticate is in high contrast with the flighty Kitty Forman of “That ’70s Show’’ — are just happy after 35 years to have something to talk about that isn’t their tanking stock portfolio.

What the show appears to be setting up as a recurring device — each couple dealing with a similar question in quick-cut succession meant to illuminate the variants associated with the length of relationships — veers between cutesy and effective.

The potential to run into a rut, especially with the long-married Vicky and Joel, looms large. But when it does work, the relatable relationship tics of “Better With You’’ should wring a few chuckles from anyone who’s ever been in love for any length of time.