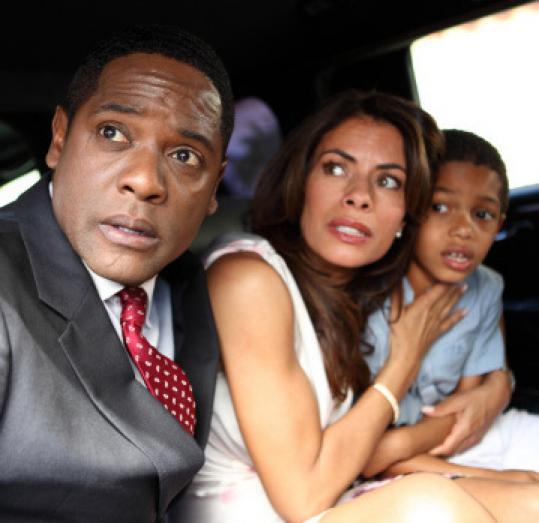 ‘The Event’’ goes through all the motions. This new NBC sci-fi series wants to be the next big post-9/11 paranoid thriller, in which diverse people are thrown together in one huge mind-blowing, nation-threatening, world-altering, cosmos-colliding mystery plot.

In tonight’s premiere at 9 on Channel 7, “The Event’’ goes through those motions like a diligent B student. The creator of the show, Nick Wauters, has done his mythology-series homework, and now he’s taking his skills public with the hope of delivering the “Lost,’’ “24,’’ or “X-Files’’ of the 2010s. Hijacked plane? Check. Coverup involving the president and CIA? Check. Big Secret that could change the fate of mankind forever? Check. Zeljko Ivanek? Check.

Like the makers of the similar “FlashForward,’’ Wauters forgets about the essential ingredient in any good series: characters to care about. They are the reason most viewers are willing to commit weekly to a suspense puzzle. The “Event’’ premiere operates like a well-oiled machine, feverishly traveling back and forth in time with lots of “23 Minutes Earlier’’ and “11 Days Earlier’’ twists as it builds to the final moments. But the lack of a human entry point renders the whole thing passionless. It’s more of a slick contraption than a truly thrilling hour.

Mythology shows have become a network grail since “Lost’’ proved that fans are more willing than ever to throw themselves into an unfolding mystery. Enabled by the Internet, Losties chewed over every bit of back story and each tiny reveal with the fervor of video gamers. They showed the networks that TV can still inspire obsession and loyalty in the Internet era. But without emotional identification in the mix, the attempted mythology in “The Event’’ feels as unengagingly generic as the show’s title.

What’s it about? That’s hard to say because 1) I don’t want to spoil anything and 2) the subject remains vague at the end of the premiere. A young woman named Leila (Sarah Roemer) disappears on a cruise with her boyfriend, everyman Sean (Jason Ritter). Meanwhile, the president — played by Blair Underwood — is setting mysterious detainees free against the CIA’s advice, and he may be the target of a plane heading toward him.

I’m going to watch next week, in hopes of finding an answer to tonight’s biggest cliffhanger: Can “The Event’’ turn out to be something more than just another mega-conspiracy wannabe?