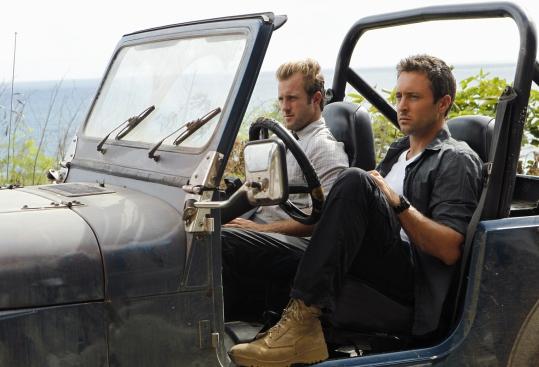 The word “reboot’’ is in vogue when it comes to TV: It implies that the updated show in question is aiming for something new, a top-to-bottom rethinking. The duller, more traditional word “remake’’ connotes a mostly straight-up imitation.

But the new “Hawaii Five-0,’’ which premieres tonight at 10 on Channel 4, falls somewhere between those two approaches. The show feels enough like the original “Hawaii Five-0,’’ which ran from 1968-80, to qualify as a respectful and affectionate remake of the material. It’s not a completely new show that’s merely using the old title as a marketing tool, in the manner of the awful “Bionic Woman’’ and “Knight Rider’’ redos. The new “Hawaii Five-0’’ executive producers — Peter Lenkov, Roberto Orci, and Alex Kurtman — have even preserved the great old theme song.

But then there are a number of more timely flourishes, including an emphasis on the cops’ personal lives and a few buff-body shots, to root the show in the here and now. Kono (Grace Park), for example, is now a gorgeous female police academy cadet — and surfer — instead of the burly guy in the original.

The cast is promising, including Alex O’Loughlin as Detective Steve McGarrett, originally played by Jack Lord. seems bent on making the Australian actor a star, despite his stiff work in the failed series “Moonlight’’ and “Three Rivers,’’ and this time it might work. Playing a former Navy officer turned cop, O’Loughlin is cool as always, but the producers have wisely teamed him with the more hot-headed and expressive Scott Caan as New Jersey transplant Dan “Danno’’ Williams (originally played by James McArthur). Caan turns the rapport between the two men into one of the highlights of “Hawaii Five-0,’’ provoking O’Loughlin to loosen up and banter rather than just stand around being a icy, bland action hero with mad abs.

“I’m glad you have that G.I.-Joe-thousand-yard-stare from chasing shoe-bombers around the world,’’ Danno complains to his tough-guy partner after a shooting incident. “But in civilized society we have rules. . . . Rule No. 1: If you get somebody shot, you apologize!’’ The best thing about this summer’s “Entourage’’ as Scott Lavin, Caan just might steal this series from O’Loughlin.

“Hawaii Five-0’’ has McGarrett running a special branch of the Hawaii State Police, per the request of the governor (played by Jean Smart). With Danno, Detective Chin Ho Kelly (Daniel Dae Kim), and Kono, who is Kelly’s cousin, McGarrett tries to clean up the island while solving some of his own family mysteries. They make an appealing team, and it doesn’t hurt that they’re chasing bad guys through the breathtaking — and HDTV-ready — beauty of Hawaii. There’s nothing groundbreaking going on here, just old-fashioned action-adventure fun. New old-fashioned fun, that is.