‘Boardwalk’ gambles with Buscemi and wins 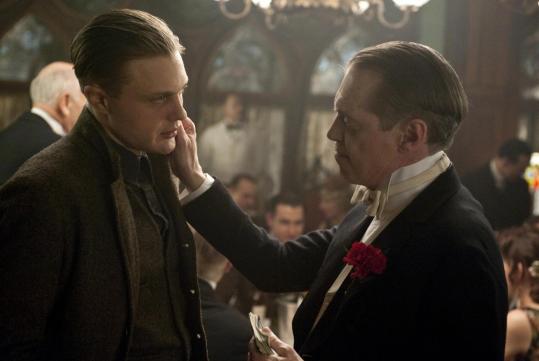 When the gaunt Steve Buscemi dresses in a stiff 1920s suit, with a broad, starched shirt collar that makes his neck disappear, he looks like a gentleman corpse — maybe a Grateful Dead mascot, or an anemic vampire. As the lead in HBO’s new period mobster drama, “Boardwalk Empire,’’ he projects only antiheroic vacancy and irritability. He isn’t easy to read and commanding like James Gandolfini in “The Sopranos’’ or broodingly beautiful like Jon Hamm in “Mad Men.’’ He is, to coin a term, acharismatic.

And yet Buscemi is peculiarly mesmerizing as Nucky Thompson, the corrupt city treasurer in 1920s Atlantic City, just as Prohibition goes into effect. He is riveting in the way a spider is while spinning out a fine, labyrinthine web. And he fits just right into the big-budget, visually splendiferous vision of “Boardwalk Empire,’’ which premieres Sunday at 9 p.m. I was initially skeptical about the decision to place Buscemi at the center of an HBO blockbuster, but I now see it was a clever choice. While the drama is about hedonism, fantasy, and the heightened lure of the forbidden, Buscemi occupies its center as a guy who is barely able to enjoy himself. He’s a neurotic pragmatist for whom pleasure is a waste of time. He’s Atlantic City’s ironic son.

“Boardwalk Empire’’ arrives with sky-high expectations. It’s HBO’s heralded return to mobsters after “The Sopranos’’; it’s the series whose pilot is directed by Martin Scorsese, who is also an executive producer; and it’s the brainchild of “Sopranos’’ writer-producer Terence Winter. That “Boardwalk Empire’’ still manages to greatly impress is quite a feat. The show isn’t easy to warm up to, to be honest; it’s draped in — and at times stifled by — meticulous period detail and too-perfect lighting, especially in Scorsese’s premiere. But in episode two, the characters and the script begin to prevail, and the drama becomes more emotionally distinct and fascinating. And by episode three (I’ve seen six in all), the show hits its stride, with the mob action growing into a more primitive and unpredictable game, and the female characters emerging from stereotypes.

Also a plus in episode three: Michael Kenneth Williams — so remarkable as Omar in “The Wire’’ — shows up playing Chalky White, the leader of the local black community. As Nucky and his old-boy buddies, including his police-chief brother, go further into the scrappy world of running illegal booze, they find themselves caught between a wide range of groups, from the black community to the New York and Chicago mobs to the local KKK to the Women’s Temperance League. This chaotic confluence of factions — it’s like “Oz’’! — helps make “Boardwalk Empire’’ into a portrait of a shifting America, with all kinds of unusual alliances breaking and reforming and breaking again. When the ever-discreet Nucky meets the loose-lipped Lucky Luciano (Vincent Piazza) over a liquor deal, the culture clash is written on Nucky’s disapproving face. And yet all of those competing for booze money know that working in tandem — as organized crime — may be the more fruitful route.

“Boardwalk Empire’’ is a hybrid, blending historical fact (from Nelson Johnson’s book “Boardwalk Empire: The Birth, High Times, and Corruption of Atlantic City’’) with fiction. Nucky is loosely based on real Atlantic City treasurer Nucky Johnson, and the infamous Al Capone (Stephen Graham) and Arnold Rothstein (Michael Stuhlbarg) appear as series regulars — with Graham’s Capone, in particular, coming vividly to life. They coexist with invented characters, most notably Nucky’s young protégé, Jimmy Darmody (Michael Pitt). Darmody is the second lead in the show after Buscemi, and when he moves to Chicago the story follows him.

And that’s a good thing. As in “Rome,’’ the fictional characters are among the show’s most compelling, especially Jimmy. He left college to serve in World War I, and he has returned with an oppressive sense of darkness and anarchy. He’s a manchild looking for paternal respect from Nucky, but he has also grown unwilling to play by others’ rules, all of which Pitt evokes beautifully with very few words. The mild-mannered, ladylike Margaret (Kelly Macdonald) is a fictional character whom Nucky rescues from an abusive husband, and her undefined presence in his life suggests something mysterious about him. She’s an Irish-born Madonna type, and Nucky is generally seen around town with a shrill showgirl named Lucy (Paz de la Huerta). And Agent Nelson Van Alden, played with eerily twisted sadomasochism by Michael Shannon, is a zealous Prohibition investigator with the IRS.

By the end of episode six, I had no idea where “Boardwalk Empire’’ was heading. And that’s a great feeling, to find a series that’s clearly going to avoid comforting clichés in order to explore some of the less familiar aspects of human nature. Nucky, Margaret, Jimmy, Agent Van Alden, and even Lucky Luciano and Al Capone all become more engaging as they begin to make surprising and self-contradictory choices. As the battle between the government and booze heats up, the people in “Boardwalk Empire’’ ricochet ever more fiercely between control and appetite, between practicalities and dreams. They aren’t only one thing, and Nucky is no exception. Look hard into the icy soul of this self-serving operator, and you just might find a hidden pocket of warmth.

Matthew Gilbert can be reached at gilbert@globe.com. For more on TV, visit www.boston.com/ae/tv/blog/.