A mysterious assassin — minus the mystery 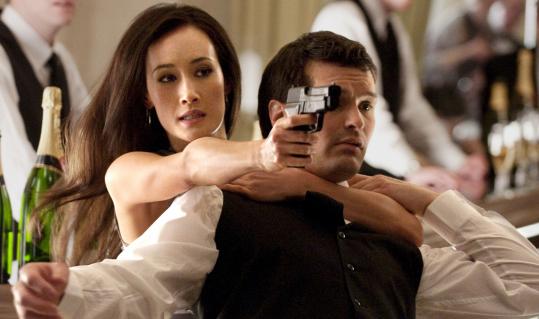 If it’s true that you don’t miss your water till your well runs dry, then I’m missing my water, because this well — the Nikita well — is all but dust. I groaned when I heard that the CW was coming out with yet another version of the Nikita story, after the 1990 Luc Besson movie, the 1993 American remake with Bridget Fonda, the 1997 USA series, and the rest of TV’s recent kick-butt rebel-chick shows including “Dollhouse.’’ And I’m groaning still, after watching tonight’s premiere, at 9 on Channel 56.

The CW remake isn’t awful, by any means. The pilot rushes ahead nicely, with a twist at the end that gestures toward many possible future plotlines. But we’ve seen the whole thing many times before — the dark angel with the killer karate kicks and the glossy lips, the fluorescent lighting in the windowless top-secret compounds, the back-alley standoffs complete with witty repartee, the nighttime atmosphere hanging over everything. We’ve seen the same kinds of mythologies unfold countlessly, from “Alias’’ to “Bionic Woman’’ — the do-good traitors inside the amoral secret organization inside the American government or some iteration of that maze. “Nikita,’’ with its shadowy agency known simply as Division, is no different.

The story goes like this: Nikita, played by Maggie Q, was taken from death row by Division and trained to be an assassin. But she fell in love, was betrayed by her handlers, went rogue, and is now trying to pay back Division — led by Shane West’s Michael and Xander Berkeley’s Percy — for their wrongs. Meanwhile, Division continues to recruit young criminals, retrain them, and deploy them, including Alex (Lyndsy Fonseca) and Jaden (Tiffany Hines). At one point, Jaden explains the whole Division thing to Alex, who appears to be in denial: “You’re here to kill for the man, honey. . . . And if you don’t deliver, they’re gonna kill you.’’ Amid lessons in getting intel and infiltration, the new kids also receive mothering and fashion advice from the Division’s Amanda, played by Melinda Clarke. Unfortunately, Clarke, from “The O.C.’’ and “CSI: Crime Scene Investigation,’’ is unable to spark up the show’s rigidly humorless tone.

As Nikita, Maggie Q is too much of a sad sack. Partly, her depressed demeanor is appropriate, since Nikita is so scarred and bent on revenge. But Q doesn’t seem able to layer any other emotions over her cold resolve. It’s a stilted, one-note, unsympathetic performance, the weight of the world heavy on her face even when she’s in action mode. The former model looks great taking out a guy in a pool while wearing a red bathing suit, or in a “Flashdance’’-y outfit as she conceives anti-Division plots in her fabulous loft. But alas, she sounds a little bit like Debbie Downer.