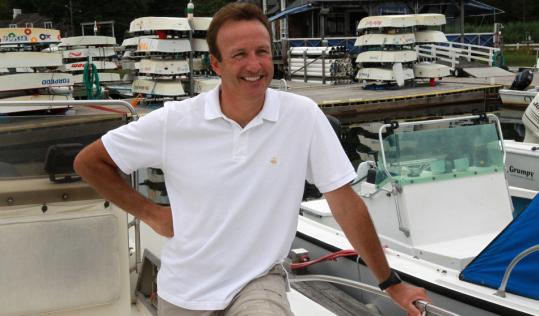 The host of WCVB-TV’s long-running “Chronicle’’ is as comfortable tooling behind the wheel of his boat, a 21-foot Grady White, as he is in front of a camera.

“Can you imagine being out here in a storm?’’ Anthony Everett marveled as he gazed at the towering Minot’s Ledge Light a mile offshore and regaled his passenger with details of the lighthouse’s century-and-a-half history. “Just amazing.’’

Born and raised in New York City, Everett now is entrenched in the South Shore. For the past 11 years, he has lived in a modest, modified Cape in a shady enclave of Cohasset, not far from the waters he loves.

He and his wife, Lydia, had been living in Wayland and were looking for a home in Duxbury. But one day she wandered through Cohasset and gave her husband a call.

“She grew up on Lake Michigan and always wanted to live on the water again,’’ Everett said, as his boat drifted in the calm morning waters near the lighthouse. “She saw the house, called me, and said, ‘This is it.’ ’’

They bought it that night, he said, and have been a part of the local landscape since, shopping in neighborhood stores and dining in favorite restaurants. He is also involved with such charities as the South Shore Habitat for Humanity and the Cohasset Education Foundation.

“We just love it here; it’s the perfect place for us,’’ said the 49-year-old Everett. “Not far from Boston and right by the water. It’s a great place to raise a family.’’

The family consists of the couple’s children, Alexander, 17, and Claire, 8, and a pair of exceptionally friendly Portuguese water dogs, Buster and Gracie, the former being the uncle of Bo, the dog of President Obama’s family.

Everett joined Channel 5 as a reporter in 1989, became a news anchor in 2000, and has hosted “Chronicle’’ since 2005, winning Emmys the last three years. He cohosted “Chronicle’’ with Mary Richardson until she retired in May, and has been doing the show solo since, occasionally with cohost Shayna Seymour.

But this longtime TV journalist could have just as easily been a lawyer, he said. Fresh out of Tufts University, Everett had been accepted at Boston College Law School.

“I was a double major at Tufts, English and philosophy,’’ he said, adding with a laugh, “meaning I was qualified to drive a cab or be a news anchor.’’

Or, as it turned out, a ski bum. Everett and a few buddies hit Aspen right out of college. They left, but he stayed.

“I was waiting tables and skiing,’’ he said. “Then I heard about a job opening up at KSPN, which was an FM radio station that was just starting out in television. They needed a sports guy, and since I was editor-in-chief of the Tufts Daily, I figured I’d try out.

“My audition was awful, just awful,’’ Everett said, wincing at the memory — but he got the job. Within a year and a half, he was news anchor, overseeing the department. And, there he met two women who would change his life, the first being the station owner.

“A year after I got there, her daughter, Lydia, came out,’’ Everett said of his wife of 20 years. “I like to joke that I met my mother-in-law before I met my wife.’’

After a one-year stint in Hartford, he came to Channel 5.

These days, he works at home as much as possible, researching stories or writing scripts, before heading to the station’s Needham studios in the afternoon. Though he is the host of “Chronicle,’’ he does substantial reporting for the TV magazine’s 150 to 170 episodes per year, including a recent trip from Duxbury on a shark-tagging expedition. That day began at 5 a.m. and ended at 8 p.m., when that night’s show was over.

“Morning is my family time; we get the kids off to school, then I can work, go for a run, a bike ride, or out on the boat,’’ he said, just as Claire ran into the room for a quick hug. “It’s the best of both worlds.’’

“Chronicle’’ has endured for 28 years, consistently number one or two in the ratings, battling with “Jeopardy’’ in the 7:30 p.m. spot. In the July Nielsen ratings, “Chronicle’’ averaged 156,000 nightly viewers.

Everett said he is basically a storyteller, thriving on meeting interesting people, going to unusual places, and telling stories of what he finds. Though most of the show is about New England, it has also done pieces on such far-flung places as Costa Rica and Seoul. “We’ve gone all over the world, but it’s local people showing it to you,’’ he said.

While the show is in reruns for summer, Everett’s duties don’t stop, as he films now for programs that will air later. And though the shows you’re seeing are repeats, Everett is live in the studio each night providing lead-in narrative and observations between segments. He said he likes the more-or-less steady hours of his job now, but does miss reporting and anchoring news.

“There was a big fire in Boston recently, and I was in the studio anchoring it for an hour and a half that afternoon,’’ he said. “When you ask what I miss about the news, that’s it, when it’s live and the juices are flowing.’’

On a recent evening, Everett cohosted with Seymour, and as segments aired, they watched on their monitors, chatting between themselves, then reading from teleprompters mounted on three robotic cameras before them.

Anchor Heather Unruh stopped by to do a live news teaser for the nightly news, chatting with Everett and Seymour when segments ran.

Then they went live again, Everett smiling, thanking viewers for joining them, and saying good night.

Then he headed home to Cohasset, where he would relax, sleep, be a dad and husband, then start the process all over the next day.

Paul E. Kandarian can be reached at kandarian@ globe.com.