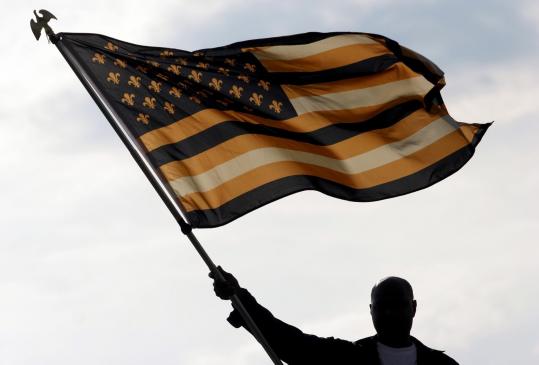 A scene from Spike Lee’s “If God Is Willing and Da Creek Don’t Rise’’ shows a man waving a flag on the levee wall in the Lower Ninth Ward of New Orleans. (Charley Varley)
By Mark Feeney Globe Staff / August 20, 2010

Programming television can’t be easy, and least of all in August. So it should come as no surprise that next week offers three documentaries tied to the fifth anniversary of Hurricane Katrina, which made its landfall on the Gulf Coast on Aug. 29, 2005. What is surprising is how different in tone, approach, and subject they manage to be.

Spike Lee’s “If God Is Willing and Da Creek Don’t Rise’’ follows up on his Emmy-winning 2006 documentary, “When the Levees Broke: A Requiem in Four Acts.’’ That film was about the hurricane and its immediate aftermath. This one looks at New Orleans in the time since. More specifically, it looks at New Orleanians. Personality, both his own and that of the characters in his films, has always been Lee’s strong suit as an artist. The vividness and unpredictability of his interviewees is what’s best about the documentary. The title’s sense of wary optimism — all right, very wary optimism — largely reflects their view.

Some are famous, like Brown, coach Sean Payton (the documentary begins with citywide euphoria over the team’s victory in this year’s Super Bowl), and Brad Pitt, who’s bankrolled low-income housing in the city’s Lower Ninth Ward. Some also appeared in “Levees,’’ like former mayor Ray Nagin, histori an Douglas Brinkley, and trumpeter Terence Blanchard. Blanchard, a frequent Lee collaborator, also contributes a very fine score. There’s a recurring trumpet figure, moody and expansive, that sounds a bit like “It Ain’t Necessarily So’’ (more wariness?). Most of the interview subjects are local residents unknown beyond New Orleans or even within it: journalists, officials, academics, everyday people, many of them poor — people who have endured.

In a nice touch, Lee identifies his interviewees not just by name but also place of residence. Sense of place deeply informs the documentary. A woman who returned to the city after living in a FEMA trailer for eight months says, “Living in New Orleans is a privilege. It’s not easy, but it’s a privilege.’’ The idea of the city’s exceptionalism, in ways both good and bad, suffuses the documentary. “We’re not really part of the United States,’’ says Garland Robinette, a local radio host. “We’re kind of like a rich Haiti.’’ (Lee devotes several minutes to the Haitian earthquake.) That sense of otherness is part of what makes the city seem both so alluring and almost cursed.

Part One is stronger than Part Two. There’s a consistent looseness to the documentary, as one issue or topic flows into another: the role of the Army Corps of Engineers, say, to how Mississippi fared so much better than Louisiana in getting federal recovery funds to the fate of New Orleans’s Charity Hospital. That looseness can be appealing, but after three hours or so it begins to feel like slackness. A long segment on the oil spill, the latest in the region’s almost-biblical tribulations, feels longer than it actually is — much longer. Moral righteousness and artistic laziness is not a good combination.

Lee can occasionally be heard as off-camera interviewer. He shows one maddening directorial tic: After presenting an interviewee face on, he then presents him or her at a right angle. It’s as if he’s saying, “Hey, this might be an HBO documentary, but don’t forget the guy who made it is a famous feature filmmaker.’’ Making up for that is a wondrous bit of directorial inspiration at the end of Part Two. Interviewees appear in alphabetical order (and there are a lot of them), giving their name and whatever other particulars they wish, while holding an empty picture frame around their face. It’s simple, unaffected, and utterly charming. The funniest credit consists of just three words, “Brad Pitt, self-employed.’’

The National Geographic Channel’s “Witness: Katrina’’ airs Monday opposite the first part of “If God Is Willing.’’ It deals with just the hurricane. Campbell Scott, who’s excellent, provides an understated voice-over. It’s basically an aural timeline.

“Witness: Katrina’’ consists almost exclusively of footage shot by nonprofessionals. Thanks to the gravity of the event (and the power of the images), the result represents a kind of apotheosis of the twitchy, lo-res, in-your-face documentary style that fills so many hours of cable programming. It’s the negligible made monumental.

The overall effect is creepy, but extremely effective. “Witness: Katrina’’ is a real-life horror movie far scarier than anything Hollywood could come up with: a “Blair Witch Project’’ with groans of roaring wind and rain. The storm footage is truly terrifying — though perhaps not as terrifying as that of people haw-hawing through a pre-Katrina party. There really are an awful lot of bozos out there with camcorders. “Yeah, the footage is getting pretty good now, Joe,’’ one videographer announces, “a lot better than I expected. I was really expecting kind of a boring day here.’’ Boring is as boring does. This was several hours after Katrina’s landfall.

Next Wednesday’s “Frontline’’ broadcast, “Law & Disorder,’’ uses a death in the immediate aftermath of Katrina as a lens to look at the New Orleans Police Department. It’s not a pretty sight. The documentary is a collaboration with The Times-Picayune, the New Orleans daily newspaper, and ProPublica, the nonprofit, public-interest news organization.

An African-American New Orleanian named Henry Glover was shot on Sept. 2. Glover’s brother flagged down a passing motorist, also African-American, and they took Glover to get medical attention at a nearby elementary school that police had turned into an emergency center. Instead of giving assistance, officers beat the two men and drove off with Glover and the car. It’s a shocking turn of events — or maybe not. New Orleans police shot no fewer than 11 residents in the days after Katrina. Those shootings are examined in “Law & Disorder.’’

The Glover incident briefly figures in Lee’s documentary, and several of the principals in “Law & Disorder’’ appear in “If God Is Willing.’’ The most notable is A.C. Thompson, the investigative reporter who broke open the story. Who shot Glover and what happened after the beatings is, literally, scandalous. It’s such a scandal that one keeps waiting to hear from the officers the documentary has identified. Yet the way “Law & Disorder’’ chooses to present the story is a bit of a cheat. The reason the bad cops remain unheard from, as we don’t learn until later, is that they’re under indictment. The importance and drama of the story mean “Law & Disorder’’ shouldn’t have to resort to what amounts to withholding narrative evidence. It’s par for the course in TV crime shows, but just because it’s August doesn’t mean that a series as good as “Frontline’’ should, too.

IF GOD IS WILLING AND DA CREEK DON’T RISE