A fun exercise in dragging out a girl’s inner queen 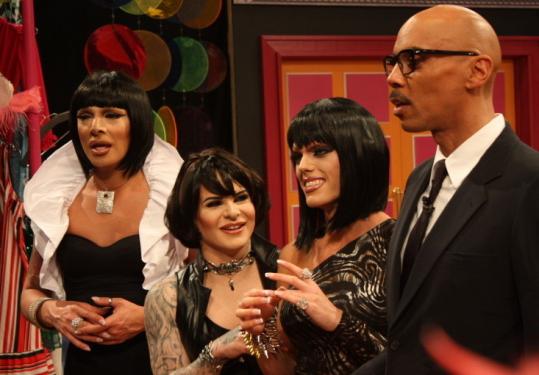 We’re all dying to know whether “RuPaul’s Drag U’’ is more Hedda de Class than Lady Gag-gag, more Adrenalynn Rush than Terri Belle. And so I am here to tell you that this new Logo makeover series, which helps women find their inner diva and become fabulous, is far from Devoida Huma and you won’t DeManda Refund. As the show puts “drag queen heads on women’s shoulders,’’ in the words of Dean RuPaul, it is a Raya Light.

The idea of “RuPaul’s Drag U,’’ premiering tonight at 9, is to teach three slovenly, downbeat biological women per week how to unleash their personal power. They are given drag names — tonight, self-labeled tomboy Reyna is dubbed Candy Graham, biker chick Linda is renamed Paya La Renta, and Shaya is crowned Saline Dijon. They’re coached in sashaying, dancing, emoting, and being fierce. And finally they are stuffed into mile-high wigs, glittery gowns, and pointy heels for a pageant contest. Voila! From mortals to superheroines overnight.

Each contestant is assigned a drag “professor,’’ who is an alum from “RuPaul’s Drag Race.’’ Tonight’s teachers are Ongina, Raven, and Jujubee, who, by the way, hails from Boston. These ladies mean business, as they compete with one another to make sure their charge wins. At one point, Jujubee and Raven face off over who gets to wear an especially blond wig. “We’re professors, and we should be setting an example,’’ Raven says to Jujubee during the fight, but don’t think that Raven, with her lips and Sally Bowles hair, backs down. And don’t think Raven’s Paya La Renta doesn’t legendarily rock that wig during her ultimate march.

The humor is nonstop, from the prancing professors to the bad puns — for example, the contestants strive for high DPAs, or Drag Point Averages, and finally they “drag-uate.’’ RuPaul, who only appears out of female drag, campily presides over the contest wearing Clark Kent glasses, a mustache, and a cool academic mien. He keeps his affectionate smirking and winking hidden just behind his eyes.

But within the fun fluff, the show offers a sweet message, which RuPaul reiterates: “Use what you have to get what you want,’’ he says to a student. “RuPaul’s Drag U’’ is all about showing women — “the kind who don’t have to tuck,’’ RuPaul notes — how to be unashamedly themselves. This isn’t a makeover show hoping to change women so much as help them bring out and share their gifts. There’s no talk of weight loss or surgery — just of ferocity and passion. In that way, “RuPaul’s Drag U’’ is like most contemporary makeover shows, leaving behind the ugly, invasive approach of “The Swan’’ and “Extreme Makeover’’ in favor of the self-confidence-boosting Carson Kressley’s “How to Look Good Naked.’’

Does the drag component make “Drag U’’ into a niche makeover series? Absolutely not. If you think of drag as simply a costume, then all makeover shows are about learning to do drag, to flaunt the feathers. These people are hoping to wear their clothes, and their identities, with assurance. At the end of the day, they all want to Bea Peachy Keene.