Desperate housewife on verge of foreclosure 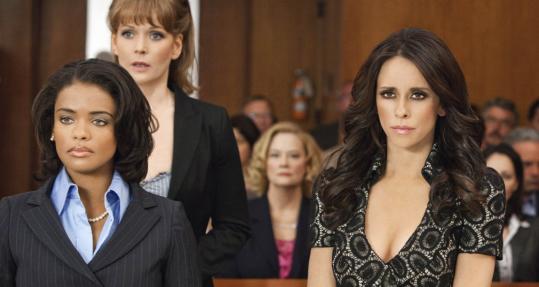 Here’s a strange little Lifetime movie. Called “The Client List,’’ it’s about a twangy Texas wife and mother who secretly goes a-prostitutin’ when the bank threatens to foreclose on her mortgage. At first we see her in curlers and mom jeans; later, she’s carefully directing the nozzle of a whipped cream container while dressed in lacy lingerie.

The tone of the movie, tonight at 9, is kind of “no worries.’’ Ever so blithely, Samantha Horton (pun intended?) sails her narrative arc from Mom of the Year straight to the shores of Whore with a Heart of Gold. There’s a little bit of moral agita along the way, of course, when Samantha first sells her body so she can send her boy to football camp. At one point, she vomits just thinking about her behavior. But mostly, our Recession Hooker breezes into work at the “massage parlor’’ and quickly becomes the most popular chick in the henhouse. Mickey Rooney and Judy Garland put on a show to raise money, and so do these gals, with Samantha as their lead player.

I haven’t yet mentioned that our resourceful heroine, whose husband (Teddy Sears) has lost his construction job over a bad knee, is played by Jennifer Love Hewitt. Now that “Ghost Whisperer’’ has been canceled, Hewitt appears here as if she’s still playing the all-seeing Melinda from that show. She’s one of those actresses who always seems the same, heavy Southern accent or not. And she plays identical notes in “The Client List’’ whether she’s the wholesome former beauty queen or the lady of the night — tall, good-haired, high-cheekboned notes.

In a tonal twist that’s mildly humorous, just as it can be in HBO’s similarly themed “Hung,’’ “The Client List’’ celebrates Samantha’s pluck for agreeing to have sex for money. The movie presents prostitution as a recession-proof option for a brave person in a pickle. Samantha is an Everywoman victimized by the tanked economy and, as the ad puts it, she “will do ANYTHING for her FAMILY’’ — the anything being strange men willing to pay her in cash. She’s a bit of a hero, even if she has apologies to make for lying.

And she is not only trying to help her family (which includes Cybill Shepherd as her brittle mother); she wants to help the families of her johns, too. She services the men, yes, but she also spends their sessions coaching them on how to revive their relationships. Hey, you got marriage counseling in my illicit pleasure — she’s the Reese’s Peanut Butter Cup of hookers.

And what of the title? If Samantha is going to get busted in “The Client List,’’ so are the men who’ve pledged their allegiance to her skills, many of them local luminaries. No one gets off scot-free in this tale of financial desperation — and yet, oddly, and sometimes amusingly, everyone does.