Here’s everything you need to celebrate in style 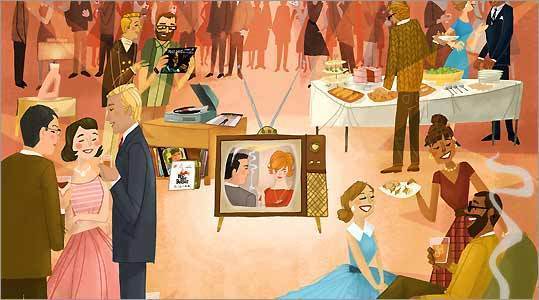 It’s not difficult to picture “Mad Men’’ ice princess Betty Draper dourly leafing through the Better Homes & Gardens “Snacks and Refreshments’’ cookbook — vodka gimlet in hand — looking for just the right gelatin salad to serve at a cocktail party that will undoubtedly end with slamming doors, couched insults, and a pinch of extramarital groping. “Snacks and Refreshments,’’ published in 1963, is filled with recipes that would induce heartburn in the heartiest of eaters today: Tomato Soupshake, Parmesan Rice Squares, and Pudding ’n Pineapple Cake, anyone?

But next weekend, these sorts of long-forgotten atomic age delicacies, along with retro cocktails and Johnny Mathis records, will rise like musty ghosts in homes across the country as die-hard “Mad Men’’ fans prepare for the return of their beloved drama. The show, which returns to AMC for a fourth season July 25, has inspired the kind of fanaticism generally seen only among tailgaters at Jimmy Buffett concerts and followers of the “Twilight’’ saga. Some fans are celebrating the show’s return with parties that will allow participants to time travel back to the early 1960s.

“My friends have been making fun of the fact that I’ve been looking for the perfect dress for two months,’’ says retro maven Julie Drew of Somerville. “I’m throwing a ‘Mad Men’ party, and really want my Joan Holloway look to be flawless.’’

Natasha Vargas-Cooper, author of the blog Mad Men Unbuttoned and the forthcoming book of the same name, says she’s not surprised by the devotion.

“Aesthetically it’s delightful and something that there’s a yearning for,’’ she says of the show. “Beyond a lot of incredibly well-developed characters, you have a group of pretty people behaving badly, and who doesn’t love that?’’

We’ve compiled everything you need to create the ideal “Mad Men’’ atmosphere, whether it’s for a premiere night bash or a long-term commitment.

There are two volumes of “Mad Men’’ soundtracks available, but for those who want to show off their knowledge of the era, here are songs used in the show that have not yet found their way onto a soundtrack. Even though season three left off in 1963, rock music is sparse, because, as Vargas-Cooper says, “I don’t think anyone going to a party at Don and Betty’s would be listening to rock ’n’ roll yet.’’

The Platters “Smoke Gets in Your Eyes’’

Johnny Mathis “What’ll I Do’’

Percy Faith and His Orchestra “Theme from ‘A Summer Place’ ’’

Vic Damone and Percy Faith “On the Street Where You Live’’

Alcohol is one of the most important aspects of the show, so carefully replicated drinks should be the cornerstone of your “Mad Men’’ party. Naturally, you should have on hand to replicate Betty’s international dinner party, but cocktails are key. Adam Lantheaume, owner of the Boston Shaker and a “Mad Men’’ fanatic, marvels at the show’s accuracy. “They don’t mess around with their cocktails,’’ he says.

She may have an angelic face and Cindy Brady’s lisp, but when she’s not busy stealing or getting violent with other kids, little Sally mixes a mean Tom Collins for her parents.

Place everything but club soda in a shaker. Shake together over ice, strain into a Collins glass with fresh ice, top with club soda, and add garnish.

When Don mixes an Old Fashioned for Connie Hilton, this is the recipe he follows.

Place sugar cube on bottom of glass, put bitters on top, muddle the cube with a muddler, add fruit and muddle with sugar and bitters. Add ice, whiskey and stir.

The perfect accompaniment for cigarettes and gossiping about the neighbors with Francine.

Unlike the parties of today, where most cocktails are served out of red plastic cups, in the early 1960s, hosts pulled out the fine stemware. To go a step further, pour your alcohol in decanters before guests arrive (but don’t forget to label which variety occupies each bottle).

There is no question that you should have multiple bags of Utz chips around the house, but what would Betty serve if she was hosting friends? First, she’d find a good Jell-O salad recipe. Then she’d liven up those chips with this recipe from the 1959 Better Homes & Gardens “Holiday Cook Book’’:

Place potato chips on a baking sheet; sprinkle with marjoram, thyme, or basil. Heat in a 350 degree oven for five minutes.

Sure, you could show old episodes of “Mad Men’’ before the show starts. But that would fall about as flat as Peggy Olson’s bangs in season one. “Mad Men’’ has made many mentions of films from the 1960s (and earlier). Keep these on mute in the background to set the mood leading up to the big debut.

“How to Succeed in Business Without Even Trying’’ The film is not referenced in the show, but actor Robert Morse, who plays Bert Cooper, won a Tony for his Broadway performance in “How to Succeed,’’ and also starred in the 1967 film adaptation.

“Singing in the Rain’’ When Betty Draper is depressed, she either kicks back with a vodka gimlet and a Benzoid, or she goes to see this. This is the film she watches after the Kennedy assassination in season three.

“La Notte’’ While Betty prefers Technicolor musicals, Don is much happier at moody foreign fare. He smokes up a storm during the film, then tells mistress Bobby Barrett how much he likes foreign movies.

“The Apartment’’ In an interview with the Wall Street Journal, series creator Matthew Weiner mentions that this is recommended viewing for the show’s writers and actors. It stars Jack Lemmon as an insurance man, but its randy, cheating vice presidents could very well be Sterling Cooper executives.

“Mad Men’’ set decorator Amy Wells (she was also responsible for the interiors of Tom Ford’s film “A Single Man’’) scours the vintage stores near Los Angeles to re-create the look of the early 1960s. She told Interior Design magazine that, “A lot of people had Danish modern at the time because it was reasonably priced, and much of it still exists because it was so well made.’’

There are stores in the Boston area that sell mid-century pieces, although you should be prepared for a bit of sticker shock depending on where you shop. Machine Age (645 Summer St., Boston, 617-464-0099) stocks original pieces from Eames and Le Corbusier in pristine condition — which means you’ll pay for quality. Reside (266 Concord Ave., Cambridge, 617-547-2929) is filled with the kind of amazing mid-century pieces you might see in Pete and Trudy Campbell’s new apartment, and ModHaus (by appointment only, www.modhaus.com) sells everything from the curtains you might see hanging in Peggy Olson’s apartment to lamps to gorgeous teak sideboards.

July may not be the most inviting month of the year for donning gray wool suits and abdomen-crushing pencil skirts, but to ensure accuracy at your party, enforce a dress code. Would Pete and Trudy ever dream of hosting a cocktail party for guests attired in (gasp) blue jeans? Juliana Cairone, owner of the ultra-posh Manhattan secondhand shop Rare Vintage, says her store has been inundated with requests for “Mad Men’’ ensembles in recent weeks in anticipation of viewing parties.

“1964 fashion was about to experience the youthquake of designers like Courreges, who was one of the first to really start shortening his skirts,’’ she says. “Givenchy was another designer who represents the early ’60s. . . . Evening or cocktail could be a one shoulder dress in joyful shades of buttercup yellow, bright pink, or turquoise with streamlined beaded embellishments or a plume of feathers.’’

For men, she says, pocket squares are essential for suits, as are crisp shirts and narrow ties. As a prop, she advises carrying a gold cigarette case — for Lucky Strikes, of course. For both sexes, you can find vintage outfits locally at Artifaktori (22A College Ave., Somerville, 617-776-3708), Bobby From Boston (19 Thayer St., Boston, 617-423-9299), Poor Little Rich Girl (three locations, www.shoppoorlittlerichgirl.com) and the Garment District (200 Broadway, Cambridge, 617-876-5230).

Stylists assure that those elaborate 1960s coiffures look more challenging than they actually are. Stylist George Amaral from Salon Mario Russo says one of the easiest things that women can do to duplicate it is to pin their hair up.

“It doesn’t have to be a French twist or a chignon,’’ Amaral says. “It can easily be done by someone showing them how to do it. If you can learn how to get the back pinned up, the rest is easy.’’

Hair guru Philip Pelusi, who owns a national chain of hair salons, is seeing a resurgence of 1960s hair, and if anyone can identify the return, it’s him. He started working with hair in 1965. For men, he says the trick to achieving “Mad Men’’ style is letting the top of the hair grow out, while keep the sides and the back short. Slick back the top with pomade or wax, but stay away from hair gel, which will look too stiff.

As for women, Pelusi says, “the trick is that you want to let the hair dry naturally, and the use a little styling product and electric rollers or a curling iron. Don’t spend 25 minutes blowing your hair straight with a curling iron.’’

For purists who are looking to replicate the full Betty Draper experience, celebrity stylist Riccardo Maggiore offers this guide to achieving Betty’s up-do from last season’s Rome episode — perfect for a party.

“Start by shampooing hair thoroughly and avoid heavy product that will weigh it down,’’ Maggiore says. “Set hair with medium-size rollers and sit under dryer. Once hair is thoroughly dry, remove rollers and brush out the hair. Next, slightly tease the hair to create volume. Split hair into two sections by gathering hair just behind the ear and pulling together into a pony in the middle of your head and secure with a clip. Work with the back section first to create a French twist; secure with pins, but leave the ends out. Take the front piece (leaving some hair out for the wave in the front) and combine with the remaining hair from the back section to create a bump-front look. Brush the last section slightly across forehead, apply a holding spray and secure with a hair clip.’’

Christopher Muther can be reached at muther@globe.com

Films to get you in the 'Mad Men' mood