A safe ‘Haven’ for shallow characters 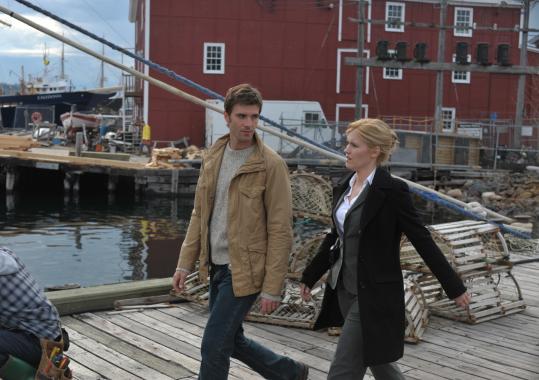 In the new Syfy series “Haven,’’ Lucas Bryant plays a hunky Maine cop with autonomic neuropathy, a condition that prevents him from feeling pain. When a car door slams on his hand, Officer Nathan doesn’t clench his perfect jaw for even the slightest of seconds.

Yes, you know where I’m going. Not long into “Haven,’’ I envied Nathan his inability to feel bad things happening to him. “Haven’’ is a bad thing, a third-rate summer series that starts happening to TV audiences tonight at 10 after the season premiere of the superior “Eureka.’’ It’s loosely based on a Stephen King novel called “The Colorado Kid,’’ but don’t let that mislead you into thinking “Carrie’’ or “Misery’’ or “The Shining.’’ This is the TV equivalent of a $3 Halloween mask.

The go-to trope for this summer’s crummiest series seems to be “the creepy but picturesque community with big secrets afoot.’’ In “Happy Town,’’ “The Gates,’’ “Persons Unknown,’’ and now “Haven,’’ people do abnormal and sometimes brutal things in contrast to their attractive surroundings. “Haven’’ has rookie FBI agent Audrey Parker (Emily Rose) going to the quaint Maine hamlet of Haven to investigate a murdered murderer. Quickly, she gets caught up in the town’s odd events: fog and snow emerging suddenly on beautiful days, a highway crumbling for no apparent reason, a freaky guy with profound personal space issues, an old photo of a woman who looks just like Audrey.

What is going on in Haven? By the time Audrey falls off a pier and wakes up undressed in the bed of town badboy Duke Crocker, where she is oddly unfazed by the realization that he must have undressed her, and where she flirts madly with him despite the fact that he is played by the distinctly uncharming Eric Balfour, you probably won’t care. Is the town filled with superheroes, super-villains, or average people cursed with unwanted “gifts’’? Whatever. The characters are so shallow, it’s hard to invest interest in them.

Rose, who has had runs on “ER’’ and “Brothers & Sisters,’’ tries to be a tough crime-fighter, an adorable flirt, and a caring healer to those in pain. But she doesn’t pull it off, coming across as a somewhat fractured personality — and one in need of a hair consultant. And her potential love triangle with Balfour’s vain doofus (Crocker! Perfect.) and Bryant’s painfully monotone Nathan is unpromising from the start; I was instantly sick of watching Audrey drifting between the ne’er-do-well and the cop, and dreaded the idea of watching the dynamic play out across the summer.

I also dreaded the unfolding mystery having to do with Audrey’s backstory. It seems as though she will be on a personal journey during her time in Haven, as she looks back to one of the town’s old unsolved case. An orphan, she is ripe for revelations about her parents.

The only thing I really wanted to see more of in “Haven’’ was the setting, which evokes Maine even while the show was filmed in Nova Scotia. Yeah, I’d live there and stare at the harbor all day long, but only if Audrey, Nathan, and Duke Crocker can be relocated to “Happy Town.’’

Matthew Gilbert can be reached at gilbert@globe.com. For more on TV, visit boston.com/ae/tv/ blog/.