‘Louie’ has feelings, not all rude and crude 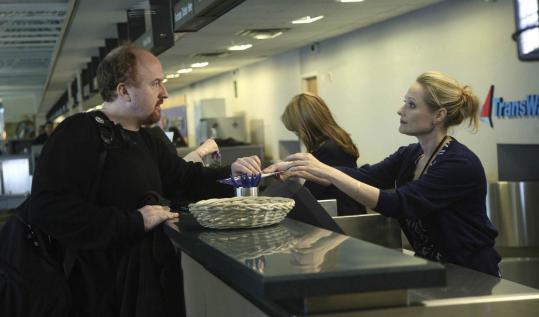 Louis C.K. plays a version of himself in “Louie,’’ which shows the comedian onstage performing his stand-up routine and offstage in scripted vignettes. (Eric Leibowitz/Fx)
By Matthew Gilbert Globe Staff / June 29, 2010

There’s a good scene at the start of tonight’s second episode of “Louie,’’ Louis C.K.’s new FX comedy series. Louie and some of his comedian buddies are playing poker and talking smack, when Louie asks the one gay guy at the table, Rick Crom, if he’s offended by the word “faggot.’’ Crom says no, but explains that faggot meant kindling wood in the Middle Ages, and that homosexuals were thrown onto burning faggots along with witches. They weren’t deemed worthy of stakes.

The table of men quiets down, before the jokes start coming again in a hail of discomfort. But a lot has happened. Crom was not defensive, and the other men heard him. He did not give them the opportunity to sneer at political correctness — he just gave them the pure ugliness of the story. “Louie,’’ which premieres tonight with two episodes at 11, isn’t a learning-and-hugging show by any means; but amid all of C.K.’s cocky bluster and politically incorrect language, there are plenty of rich moments of respite, when people with polarized world views actually hear and like one another. Rather than just a screed against political correctness, “Louie’’ has a few interesting layers.

In structure, “Louie’’ bears a glancing resemblance to “Seinfeld.’’ C.K. plays a version of himself, and each episode toggles back and forth between his stand-up routine and scripted, single-camera vignettes from his life. Louie is a divorced father of two in New York City, dealing with the physical and psychological strains of being in his 40s. Onstage, he talks about the awkwardness of returning to the dating world, then we see him on an excruciatingly awkward date. He talks about doing volunteer work at his kids’ school, then we see him chaperoning a trip. The vignettes don’t add up to much — they don’t come crashing into one another, as they inevitably did on “Seinfeld.’’ Instead, the bits are random brush strokes in a portrait of C.K.’s life.

C.K. — originally from Newton — comes off as both aggressive, as he pounds his audiences with pessimistic anger, and sweetly self-deprecating. The latter persona emerges mostly in the vignettes, when Louie isn’t wearing his stage armor — he’s the C.K. we saw during his stint on “Parks and Recreation’’ as Leslie Knope’s meek boyfriend. He is the more sympathetic Louie, since he is frequently depressed and humiliated. He botches a date and, in the third episode, he goes to a cruel doctor (played joyously by Ricky Gervais) who laughs at his penis size and jokingly tells him he has AIDS and cancer.

The crude, loud Louie — “The only reason I don’t have sex with animals is because I’m not supposed to and somebody told it to me’’ — is only half the story here.

“Louie’’ is an uneven series — although it’s far more original than C.K.’s HBO effort, “Lucky Louie’’ — and I hope more peripheral characters recur and develop as they have on “Curb Your Enthusiasm.’’ The show has potential in the way it treads some of the same ground as “Men of a Certain Age,’’ as Louie grieves his youth and yet tries to move forward with the second half of his life. As brash as his material can be — a fierce argument between Louie and his friend Nick DiPaolo, for instance, that ends in the hospital — a melancholy mood nonetheless hangs over the show. It gives “Louie’’ a heart.