There goes the neighborhood

‘Scoundrels’ and ‘The Gates’ try their best to warp suburbia 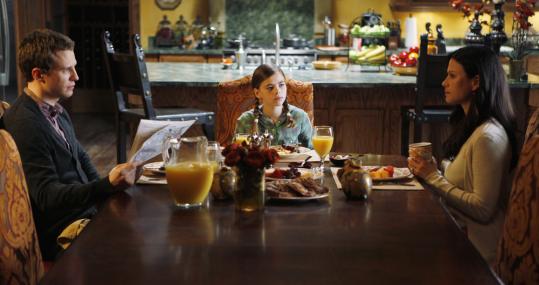 Instead of running summer repeats of “Desperate Housewives’’ on Sunday nights, ABC is premiering two new series — “Scoundrels’’ and “The Gates’’ — that similarly warp the safe, tidy neighborhood images you see in SUV ads. Both shows take American suburbia, which is built on ideals of comfort and perfection, and undermine that fiction with thieves, murderers, delinquents, vampires, werewolves, and witches. Just like Wisteria Lane had Nicollette Sheridan.

Exposing the dark side of suburbia has been stock entertainment material since “American Beauty’’ scared up a few Oscars and shows such as “Weeds’’ and “The Sopranos’’ first put criminals among the coifed hedges. The most dramatic of these stories, including “Mad Men’’ and “Little Children,’’ dig out the misery of muted lives that only look like contemporary fairy tales. They put the lie to our cultural worship of surfaces and show human nature at war with behavioral strictures.

On ABC, of course, you’re going to get the least subversive suburban warp possible, warp that makes even the domesticated John Waters of “Hairspray’’ look edgy. These dramedic ABC shows are far from “Far From Heaven.’’ Indeed, “Scoundrels’’ and “The Gates,’’ like “Desperate Housewives,’’ are trying to suggest that suburbia is actually more colorful and exciting than its reputation, that it isn’t oppressive so much as a crazy partay.

Of the two newcomers, “The Gates,’’ which premieres Sunday at 10 p.m., has slightly more to offer — though originality is not on the list. The show is “True Blood’’ meets “The Stepford Wives’’ meets “Eastwick’’ meets “Twilight’’ meets “Buffy the Vampire Slayer’’ meets “Dark Shadows’’ meets “Charmed’’ meets, oh yeah, “Desperate Housewives.’’ It’s a gathering of familiar material that never quite distinguishes itself. I’d say the show is a “mash-up’’ of its many influences, but that word implies intentionality and “The Gates’’ seems more like a lazy assemblage of cliches.

The idea is that the innocent Monahan family has just moved to a lovely gated community that’s lousy with supernatural secrets. The community is called the Gates because it’s the gates of hell, or the Hellmouth of “Buffy the Vampire Slayer’’ fame. The high school football star becomes a werewolf when his anger flares, the local tea shop is run by a witch, and that attractive British couple with the adopted daughter? Vampires. As the vampire wife, Claire Radcliff (played by Rhona Mitra from “Boston Legal’’), is inadvertently campy, twisting her face into tortured lust like she’s in a Béla Lugosi spoof, surreptitiously hiding her bottles of human blood in the wine cellar.

Nick Monahan (Frank Grillo), the new police chief, realizes strange events are afoot when a contractor disappears after a stop at Claire’s home. Meanwhile, his intellectual teen son, Charlie (Travis Caldwell) is getting involved with the werewolf’s girlfriend, which doesn’t bode well. I’m not eager to watch the second episode of “The Gates,’’ because I feel as though I’ve seen it all already; but watching the premiere was not painful.

“Scoundrels,’’ on the other hand, was hard to watch. Based on a New Zealand series, the show has a decent premise. The Wests, a nonviolent family of grifters, are living together happily until the father, Wolf (David James Elliott), gets thrown in jail. Suddenly, Cheryl (Virginia Madsen) decides that she and her children need to go straight. But that’s much easier said than done, since the kids are so accustomed to crime. Doofus son Cal (Patrick Flueger) is a break-in artist, daughter Heather (Leven Rambin) is posing for naughty photos, and daughter Hope (Vanessa Marano) is scamming her school principal. Only son Logan, who is Cal’s twin (and also played by Flueger) is not a crook. He just passed the bar exam.

Generally, I enjoy Madsen, but she is too shrill in “Scoundrels.’’ She’s always yelling, except when she breaks down in an unearned crying scene. And the tone of the show is irritating as it strains to be whimsical, patting itself on the back for being so darn quirky. There’s even a grandfather with Alzheimer’s, to compound the wacky chaos in the oh-so-abnormal West household. Not a single one of the characters were funny enough, or touching enough, to make me want to see more of them. If the Wests were thrown in jail, I’d be tempted to throw away the key.