A Hallmark story of alcoholism 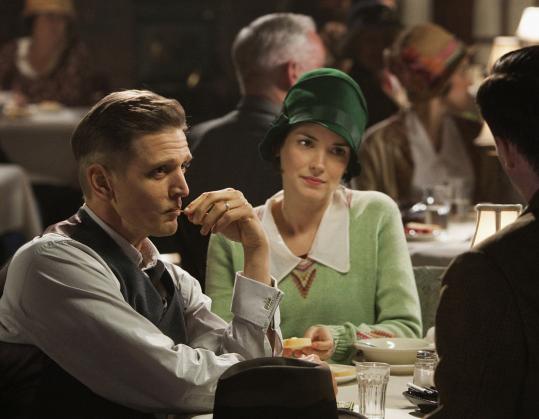 Barry Pepper and Winona Ryder as Bill and Lois Wilson, in “When Love Is Not Enough.’’ (Erica Heinila/CBS)
By Matthew Gilbert Globe Staff / April 24, 2010

Someday, I’d love to see the other version of “When Love Is Not Enough’’: the Un-Hallmark Hall of Fame story of Lois Wilson, whose husband cofounded Alcoholics Anonymous. This new Hallmark movie does its job effectively enough, bringing us through the ups and downs of Bill and Lois Wilson’s marriage as they wrestle with his addiction. Lois emerges as a powerful heroine, not just because of her faith in Bill but because she formed Al-Anon, the 12-step program for the recovery of friends and relatives of alcoholics.

But it’s all a little too tidy, especially for a story about a very messy problem. “When Love Is Not Enough,’’ tomorrow night at 9 on Channel 4, chronicles the suffering of Lois (Winona Ryder) as well as the drunken binges of Bill (Barry Pepper), and yet the movie never quite achieves emotional realism. This tale may need to be told with an R rating for violent emotions and shattered dreams, not just to drive home the ugliness of Bill’s problem, but to help us feel Lois’s pent-up rage and her sense of inadequacy when she can’t help him.

“When Love Is Not Enough’’ begins with Lois finding, in her words, “the man of my dreams.’’ Bill goes into finance in New York, while she works in a psychiatric hospital. The joy is tarnished, though, as Lois suffers miscarriages and Bill’s alcoholism grows steadily worse. Despite his promises to get sober, he continues to drink, alienating colleagues, friends, and, most of all, Lois. Painful scenes become commonplace. He abandons her in their broken-down car at night, to hike to the local bar. He staggers into her hospital room after she miscarries, so lost in his own grief he barely notices hers.

Lois tries to give up on her husband after his countless failed efforts to stop drinking. When she leaves him, her mother tells her, “You know he loves you.’’ But she has earned her weary answer: “It’s not enough, Mother,’’ she says. Still, she is caught up in Bill’s cycles, and she returns to him, trusting him again and again each time he tries to recover. She believes in him, but like him, she still doesn’t quite perceive that he has an illness. As he hits his bottom, so does she, pawning their wedding ring once everything they own is lost.

Ryder gives a nice performance — her Lois is polite, pretty, and, even at her most outraged, composed. It’s hard to know how much of this limited range is a function of the script, or the time period, or the Hallmark imprimatur, or the personality of the real Lois Wilson. But Ryder blends in well with the tone of the movie, and she projects its message of hope and faith without any false nobility. She has taken a step forward as an actress, finally having shed the teen mannerisms and vocal articulations that seemed to follow her into adulthood, even in “The Age of Innocence.’’

As Bill finds the key to staying sober, in the company of other alcoholics, Lois is once again left out. Bill heals through AA and begins to treat her with respect, but she is still left holding onto anger and the awareness that her devotion couldn’t save him. And so, in pat scenes that feel tacked onto the end of “When Love Is Not Enough,’’ Lois and some of the wives of Bill’s AA members form their own meetings, which will evolve into Al-Anon. Together in the kitchen while their husbands talk, they work to process their own rage before it destroys them.

WHEN LOVE IS NOT ENOUGH Starring: Winona Ryder, Barry Pepper