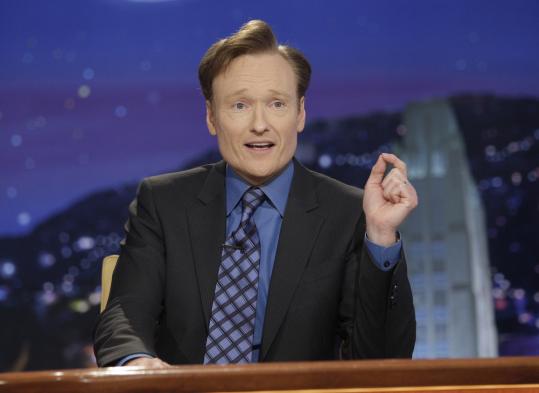 Conan O’Brien began his late-night career nearly two decades ago with a remarkable feat of reinvention, transforming himself from a writer with virtually no performing experience into one of the leading comic figures of his generation.

Now, at 47, the Brookline-born Harvard graduate has to reinvent himself again — but in an even more challenging environment.

In a surprising development, it was announced yesterday that O’Brien will launch a new late-night talk show in November not on Fox — where he had been expected to land after a bitter showdown with NBC ended with his departure in January from “The Tonight Show’’ — but on TBS, a basic-cable channel best known for movies and reruns of network sitcoms.

“In three months, I’ve gone from network television to Twitter to performing live in theaters, and now I’m headed to basic cable,’’ O’Brien cracked in a prepared statement. “My plan is working perfectly.’’

He was kidding, but it had the flavor of one of those truths-spoken-in-jest, because the reality is that today TV entertainers have to travel a circuitous — and sometimes bumpy — path. In an era of constant, rapid change, when many young viewers prefer to watch TV shows online on Hulu.com or YouTube, or time-shifting by recording shows on their DVRs for later viewing, career longevity on television requires endless adaptability.

So while O’Brien’s move to TBS is unquestionably a step down when seen in traditional terms (at “Tonight’’ he was, after all, hosting the most prestigious late-night show in TV history) it may also fit the newly emerging model of a TV career. That new model relies not just on building a sizable audience but also on creating TV segments that go viral on the Web. And yes, it may also require a willingness to tweet, which the witty O’Brien developed into an art form.

O’Brien, whose spokeswoman declined an interview request from the Globe yesterday, has not yet announced a title for his new show, slated to air from 11 p.m. to midnight Monday through Thursday. (TBS host George Lopez agreed to push his own show, “Lopez Tonight’,’’ back one hour to make room for O’Brien.)

That means that the second half of O’Brien’s program will compete with “The Tonight Show,’’ hosted by Jay Leno. It was Leno, of course, who yielded his “Tonight’’ throne to O’Brien last year and moved to prime time, only to return as host of “Tonight’’ when O’Brien left NBC rather than go along with a plan that would have installed Leno at 11:35 p.m. and pushed back “Tonight’’ to a post-midnight start.

However, Leno may not be O’Brien’s chief competition in his new gig. That is likely to come from two brainy rivals who both appeal to the young viewers who have always made up much of Conan’s audience: Jon Stewart and Stephen Colbert. O’Brien’s time slot will put him in direct competition with Stewart, host of “The Daily Show With Jon Stewart’’ and Colbert, host of “The Colbert Report,’’ both on Comedy Central.

Not only have Stewart and Colbert forged a formidable comedy programming block, but they have proven it’s possible to become major cultural forces while working on basic cable, largely by riding (and sometimes molding) the zeitgeist, and capturing young audiences in the process.

For O’Brien, that is both good news and bad news. “There are going to be a lot of people, including my students, who couldn’t tell you what channel number TBS is on, and they’re going to be able to find it now that Conan is on,’’ said Robert J. Thompson, a professor of television and popular culture at Syracuse University. On the other hand, Thompson said, “If I were Conan, the last people I’d want to go up against would be Stewart and Colbert.’’

However, Steven D. Stark, the author of “Glued to the Set: The 60 Television Shows and Events That Made Us Who We Are Today,’’ predicted that O’Brien’s move to cable will free up the inventive, experimental streak that has always been his hallmark.

“He is a perfect cable late-night guy,’’ said Stark, who lives in Belmont. “He is not a mass audience guy. To succeed at the [network] late-night slot, you have to be a mainstream Johnny Carson-type figure, which he is not.’’

As we wait to see whether O’Brien can successfully make the transition from network television to cable, it’s worth remembering that he has overcome challenges before. In 1993, when he first succeeded David Letterman at NBC, the critics were withering and the network was ready to cancel “Late Night With Conan O’Brien.’’

He reflected on that experience in a 2003 interview with the Globe. “You know the Clint Eastwood movies where they beat the crap out of Clint Eastwood and then hang him but then ride off and forget to kill him?’’ O’Brien said. “When he comes back and walks through the flames and everyone’s like ‘Omigod, it’s him’? It’s kind of like, ‘Hey, guys, you forgot to kill me, and now I’m back.’’ He paused, smiled, and added: “So the bar gets really quiet when I walk in.’’