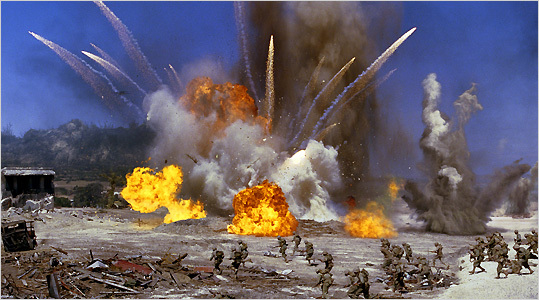 HBO's "The Pacific" depicts US troops as they confront the life-and-death stakes and soul-crushing effects of combat against Japan. (David James/HBO)
By Matthew Gilbert Globe Staff / March 12, 2010

There’s no denying the massive achievement that is “The Pacific,’’ the new miniseries from Hollywood’s history professors, Tom Hanks and Steven Spielberg.

This is 10 hours of mind-blowingly vivid World War II battle footage — the sky cracking with machine-gun fire, the torn-open chests with blood glug-glugging out, the charged jungle silences when you hear only exotic birds chirping, men breathing, and footsteps approaching. It’s a devastatingly sophisticated rendering of an analog war, from the old Bazooka blasts to the glass Coke bottles.

The HBO miniseries, which begins Sunday night at 9, is also a poignant 10-hour evocation of fierce inner battles, as Marines fighting in the Pacific after Pearl Harbor struggle to remain human. This ensemble of characters, many of them based on actual Marines, confront the soul-crushing effects of combat that almost every war movie since the 1970s has dealt with. Are they becoming machines? Can they emerge from the life-and-death stakes and adrenalized rush of war, as “The Hurt Locker’’ asked, with their selves intact? Will the explosive theater of battle render their ordinary stateside lives pointless?

In one of many haunting “Pacific’’ scenes, an exhausted Marine comes across a gasping Japanese soldier on New Britain island. Rather than shoot the man and move on, he kneels and strangles him to death — then smiles. Along with the callous officer who has a breakdown and the bored private tossing stones into a blood-filled skull, he’s in the throes of a deep, twisted internal conflict that will follow him home, if he makes it home. While “The Pacific’’ has moments of valor and brotherhood, these uncompromising images of broken men make it hard to accuse the filmmakers — as some have — of glorifying war. This is a group portrait of post-traumatic stress disorder in the making.

“The Pacific’’ is a cousin to Spielberg and Hanks’s “Band of Brothers,’’ the 2001 HBO miniseries that brought the same audiovisual intensity and psychological grimness to the fighting in Europe. Both series drop you into the loud, anarchic ground action of World War II, when drone pilots and video-game combat were still science fiction. But “The Pacific’’ does have a few significant differences from “Band of Brothers,’’ which premiered two days before 9/11.

For one thing, the men on the islands in “The Pacific’’ are in an environment that, like the climate and landscape of Iraq and Afghanistan, is largely alien to them. They face different challenges than the soldiers in Europe, as they contend with the relentless rain, heat, and insects of the jungle. The men in “The Pacific’’ are on islands that resemble holiday destinations, until hellfire erupts. Also, the Japanese soldiers were more willing to sacrifice themselves than our European enemies, like the suicide bombers who push our current wars further than ever beyond reason.

You may have noticed that I haven’t yet used character names in describing “The Pacific.’’ Amid the expertly managed tension-and-release rhythm of the miniseries, as the Marines go from full-on rampage to rest and cigarette breaks, the characters do tend to get lost in the action. “Band of Brothers’’ had a similar problem, as did HBO’s more recent miniseries about the early days in Iraq, “Generation Kill.’’ The men in these miniseries wear short hair and uniforms, and none are played by known actors, so they all blur together. Which guy just got hit? Which one is frozen with fear?

There’s something to be said for asking the viewer to feel this kind of chaos, to put us in the middle of the muddle of battle. War shouldn’t make too much sense. But once that point has been made in these epics, the interchangeability of the characters gets in the way of the storytelling power. It’s harder for us to invest emotionally in each character’s experience, since it’s not clear who’s doing what. We can be awed by the pyrotechnics, by the stunning shot of a severed hand on a battlefield wearing a wedding ring, and yet still feel distant from the personal dramas.

To be fair, Hanks, Spielberg, fellow executive producer Gary Goetzman, and their phalanx of writers and editors try to focus more on three particular real-life characters as the miniseries evolves. By episode 3, which is set in Australia while the men are resting, we learn more about PFC Robert Leckie (James Badge Dale), an increasingly cynical writer who falls in love with an Australian woman. We also follow Sergeant John Basilone (John Seda), whose heroic acts win him the Medal of Honor — and a return to the United States to shill for war bonds and play golf until his hands are bloody.

Later, we get close to PFC Eugene Sledge (Joe Mazzello) as he grows from a Southern naif with a heart murmur into a cold killer. His transformation is extraordinary, as Mazzello communicates the laconic Sledge’s descent into spiritual numbness with tiny, precise shifts in his restrained facial expressions.

Mazzello and Dale both add to the humanity of “The Pacific’’ with their committed performances, even when the disorienting narrative seems to be working against them. In a miniseries that’s in love with cinematographic spectacle, they find the heartbeat.