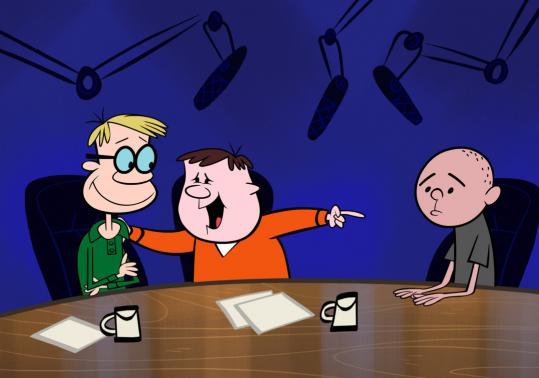 On “The Ricky Gervais Show,’’ animated characters play (from left) Stephen Merchant, Gervais, and Karl Pilkington in an attempt to transform a podcast into a TV show.
By Matthew Gilbert Globe Staff / February 19, 2010

As TVs and computers form their domestic partnership, a few questions are in the air. Does TV content play well on computer screens? Are TV shows somehow diminished on a desktop? Will online shorts - say, the sketches from funnyordie.com - be as entertaining on TV? Can a digital podcast - say, one by Ricky Gervais and his buddies - come to life when adapted for the small screen?

If you saw “Singin’ in the Rain,’’ you know that talent does not automatically transcend technology. In that great 1952 movie, the transition from silent films to the talkies destroyed the careers of those movie actors who had strange-sounding voices or poor vocal delivery. Not everyone can stand on all entertainment-delivery platforms. Tonight, HBO is trying out some cross-pollinating between contemporary platforms, adapting two shows of Internet origin for the small screen. Are they TV-friendly?

“The Ricky Gervais Show,’’ at 9, is an attempt to give the world more of the increasingly popular Gervais, the creator of the British “The Office’’ and “Extras’’ and this year’s Golden Globes host. Since 2001, Gervais, his comedy partner Stephen Merchant, and producer Karl Pilkington have been chatting together for what started as a radio show and is now a much-downloaded podcast. In the podcast, the three men tell raucous stories and riff on the news, with the simple-minded Pilkington generally serving as the butt of the jokes. He’s the jester.

Alas, HBO has come up with a dull, unimaginative interpretation of the podcast, essentially giving us animated versions of the three men sitting in a sound booth talking into microphones. As Gervais, Merchant, and Pilkington natter on, the animators illustrate moments in their conversation. For example, at one point Gervais refers to “the ramblings of someone you’d find by themselves in a hospital eating flies’’ and the show flashes to an image of a sad patient eating flies.

There’s no story line involved, just animated talking heads peppered with little animated bits. The chatter is amusing, in its way, as Pilkington talks himself into ever-more stupid corners. He delivers his ignorant theories - about a monkey flying a space capsule to the moon, for instance, or that people should die in their late 70s so a baby can crawl out of their bodies - with the kind of twisted logic that is awesome to behold. On a podcast, it works, drawing your imagination into bizarre places as you listen. But accompanied by such static imagery, Pilkington’s unique idiocy loses its allure.

“Funny or Die Presents,’’ at midnight, is a collection of shorts from the makers of the funnyordie.com website, Will Ferrell, Adam McKay, and Chris Henchy. The half-hour episodes are collections of sketches, many of them featuring familiar faces such as Rob Riggle, Busy Philips, Fred Willard, and Zooey Deschanel. Some of the pieces are new, others are re-shot versions of Web sketches - the “Drunk History’’ series, for example. Tonight, a drunk woman describes the relationship between Abraham Lincoln and Frederick Douglass as Ferrell (playing Lincoln) and Don Cheadle (playing Douglass) enact her version.

The half-hour rushes through the quickies and more drawn-out shorts with the bouncy rhythm of the 1960s show “Rowan & Martin’s Laugh-In.’’ A lot of the material is dumb, some of it is clever - it’s like “Saturday Night Live’’ in that way. But, unlike “SNL,’’ which often feels too stretched out, the “Funny or Die Presents’’ sketches skip by blithely. And it’s pleasing to see these comics fooling around without worrying about the high-stakes that come along with movies and more expensive TV work.

Will some of these shorts become favorites? Will they, like so many “SNL’’ sketches, evolve into movies? “Funny or Die’’ just may leap onto yet another platform when all is said and done.

THE RICKY GERVAIS SHOW On: HBO

FUNNY OR DIE PRESENTS On: HBO