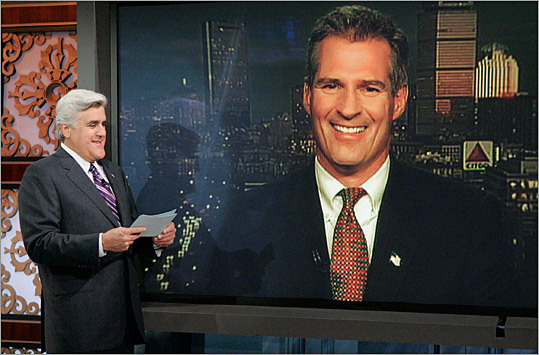 Here’s the transcript of the interview:

Jay Leno: Tonight our special guest won a stunning victory. He’ll be the first Republican senator from Massachusetts in years. Say hello to Senator-elect Scott Brown. Scott, how are you doing? I just talked to him back stage for about two seconds. He told me something amazing. Your dad was a frequent guest in our home. My dad hired your dad, he was the new young insurance agent. Your dad would come to my house when I was a kid.

Scott Brown: That’s right. And apparently your folks named your dog Bruce after my dad.

Leno: That’s right. I did have a collie named Bruce after his dad. Well, say hi to your father for me. Give him my best.

Leno: Now are you ready for these 10 hard-hitting questions?

Brown: I think so.

Leno: All right. Here we go. Number one: First thing you do in the morning?

Leno: God, that’s another thing we have in common. This is unbelievable. I can’t believe it. Question number two: Have you ever stolen anything?

Leno: There you go. Very good. Very good. Now question number three. It’s been widely publicized that while you were attending law school you posed for Cosmopolitan Magazine.

Brown: Well, that’s an interesting question, Jay, and the only reason I did it back in 1982 is because you weren’t available, number one.

Brown: And then, obviously, almost 30 years later I’d probably have to do it for mature senior AARP Magazine. So a little different now.

Leno: See, I didn’t do it because they didn’t want to spring for the extra flap for the magazine. All right. Number four: A friend of mine from Massachusetts told me car dealerships are having Scott Brown special. What does that mean for the car dealership?

Brown: Well, there’s two of them actually, Jay. One is that you can buy used GMC canyon and you get a special deal. The other one, Jay, is this right here (Brown held up an official Scott Brown toy truck). You’ve got the official Scott Brown truck and you’re going to get the first one. These are available too.

Brown: So two things going on. That gets you the first one.

Leno: How many miles do you got on your truck?

Leno: Very good. Very good. What movie have you watched the most, and can you recite a line from it?

Leno: There you go. All right. You like the art films.

Leno: Number six: Your opponent Martha Cockley made a huge mistake not knowing that Curt Shilling played for the Red Sox. I think she said the Yankees. What was your biggest campaign blunder?

Brown: Oh, gosh. Well, aside from forgetting to take the dogs out and coming home to very messy house, a couple of times I just made some verbal gasps, but nothing to worry about. But certainly nothing like the Red Sox staff. I’m certainly is definitely a Red Sox fan?

Leno: Number seven: Did you have a nickname growing up?

Leno: All right here you go: When was last time you talked to the president? And could you beat him one on one in basketball? You’re about the same age and he’s pretty fit too.

Brown: Well, he looks like he’s in great shape. It would certainly be a tough game. But the only time I spoke to him was election night. And I did challenge him to pick his best. And I’ll take my daughter Ayla who plays for Boston college and we will challenge him on a little two on two. I think we’d have the upper hand.

Leno: Really? Really? All right. All right. You heard it. That is a challenge going out tonight.

Leno: All right. You heard it all right.

Brown: It will be fun.

Leno: Number nine: Unlike your former opponent, Martha Cockley you are a bit Red Sox fan. In 15 seconds can you name the starting five pitchers?

Brown: Well, it’s obviously up in the air a little bit. You have Lester, Lackey, Buchholz, Beckett and Wakefield or -- lets me see here. Probably Wakefield or Daisuke.

Leno: All right. Very good. Okay. Last question: A B or c: When your daughter heard you say on election night that they’re available, they were A embarrassed, B they laughed it off, C got over 500 phone calls from John Edwards?

Brown: I would have to go with B they laugh it off, and then they yelled at me.

Leno: There you go. Senator Brown, congratulations. And give your best to your father. Thank you for coming on.