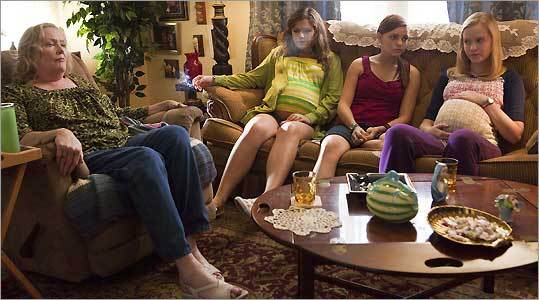 As a document of fact, Lifetime’s “The Pregnancy Pact’’ is nothing but a gesture at a loose description of a supposition vaguely resembling the truth.

The movie, tomorrow night at 9, is “inspired by’’ the sensational 2008 Gloucester High School case. No one ever proved that any of the 17 students who were pregnant that year were participating in a pact. But the pact theory nonetheless took on a truthy life of its own in the press, and the theory fits together nicely with the dramatic needs of second-rate TV fiction. And so we have a group of girls on Lifetime absolutely swearing to get knocked up together, with footage of Gloucester all around them. Obviously, “The Pregnancy Pact’’ makes a more alluring movie title than “Mysterious Pregnancy Spike’’ - just as it was a more alluring media notion than ordinary teen pregnancy back in 2008.

The “Pregnancy Pact’’ concept also carries a buried allusion to the most scandalous event ever involving emotional New England girls, the Salem witch trials. What Lifetime TV producer worth his or her weight in female target-audience reports can resist that kind of fire?

So please don’t come to “The Pregnancy Pact’’ expecting accuracy, either in the specifics or in the general shape of the Gloucester story that made national headlines. Don’t let the movie’s use of real news footage - it’s Anderson Cooper talking about Gloucester! - mislead you. The vagaries surrounding principal Joseph Sullivan’s comments to Time magazine about a pact, the internal politics at Gloucester High once the Time story broke, and the ultimate determination that the pact was hooey - they’re all fudged.

That’s what disclaimers like the one at the beginning of “Pregnancy Pact’’ are selling: Free fudge.

Don’t come expecting a very engaging or enlightening piece of entertainment, either. As a story of sex, girls in need of attention, and the contraception-abstinence debate, “The Pregnancy Pact’’ is pretty shallow. The script, by Teena Booth and Pam Davis, offers no more insight into the emotional reasons teens get pregnant than you might find in a waiting-room leaflet. The possible motivations are given a quick nod - to emulate Jamie Lynn Spears, because no birth control was available at school, because day care was available at school, because she wanted unconditional love.

But none of these ideas is teased out as the movie tumbles forward, straining to make the obvious point that teen pregnancy is no holiday.

The script is preoccupied with two characters. Innocent Sara (Madisen Beaty), 15, thinks that getting pregnant along with her girlfriends is the best way to hold on to her boyfriend, Jesse (Max Ehrich), who’ll be graduating before her. Oops: Sara’s mother, Lorraine (Nancy Travis), just happens to be leading the charge against making contraception available in the school - a charge that drives out the school nurse, played briefly by Camryn Manheim. Sara’s decision to get pregnant provides a comeuppance for her conservative mother.

Meanwhile, a teen-website blogger, Sidney (Thora Birch), has come to Gloucester to cover the pact story and to deal with her personal demons. She went to school in Gloucester and has a secret that involves one of the high school teachers. As she befriends the girls who made the pact, she revisits her own choices. This story line goes nowhere; Sidney winds up where she started, and we still don’t care about her.

The only appealing thing about “The Pregnancy Pact’’ is Beaty, who makes Sara highly sympathetic. She overplays Sara’s idealism - a little more anger toward her parents wouldn’t have hurt - but she is a sweet presence who might flourish with the right script. While every actor around her is making a single point - Manheim is the pro-contraception mouthpiece, Travis is the pro-abstinence mouthpiece, and so on - Beaty manages to bring some nice grays to her portrayal.

This could have been a movie about how the pact theory found irresistible momentum in the media, or about the bonds between pregnant teens, or about a conservative mother’s shame when her daughter gets pregnant. Instead, it’s a mishmash of facts, misinformation, and bland storytelling, one that fails both as truth and as fiction.