‘Battlestar’ prequel brings back the doom 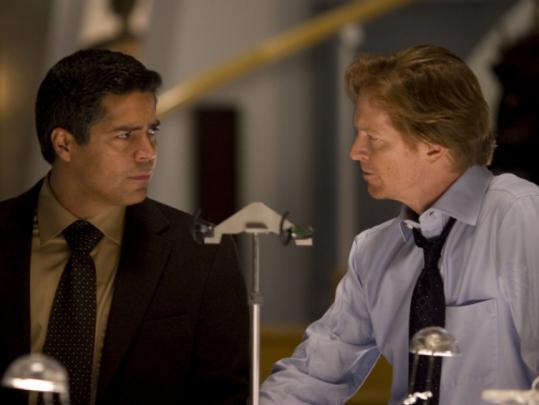 This is an edited version of a review that ran when the unedited “Caprica’’ pilot was released on DVD last year.

Compared to “Battlestar Galactica,’’ the prequel series “Caprica’’ peddles a different sort of darkness. If the former was mired in fear and desperation, this new series, which begins tonight at 9 on Syfy, is steeped in foreboding. Set some 50 years before the nuclear attacks that set “Battlestar’’ in motion, it centers on Daniel Graystone (Eric Stoltz), a brilliant and wealthy scientist on the Earthlike planet of Caprica, who has established himself as a sort of Steve Jobs of cybernetics.

Among his lucrative products is a “holoband,’’ which allows people to turn themselves into three-dimensional avatars and roam in visceral virtual worlds. (The concept owes something to the holodecks of “Star Trek: The Next Generation,’’ and even more to “The Matrix.’’) He’s also pursuing a military contract for an artificial intelligence project he’s been struggling to develop: a cybernetic fighting machine he calls a Cylon.

Daniel has a sullen 16-year-old daughter, Zoe, who, like many her age, hacks into the holobands to visit hedonistic virtual nightclubs. She’s also a computer genius in her own right, who has figured out a way to merge personal data - from medical records, school records, shopping records, you name it - to create a downloadable form of consciousness. She has secretly created her own digital twin, who exists only in the virtual world. When Zoe is killed in a terrorist attack, the digital version lives on.

Also killed in the attack are the wife and daughter of Joseph Adama (Esai Morales), a morally compromised lawyer who’s eager to shed his ties to a shady benefactor. (He’s the father of 11-year-old Willie Adama, who will grow up to command the Galactica.) The two men bond over grief, then tussle over possibilities: How far would they be willing to go to bring their daughters back to life?

Like “Battlestar Galactica,’’ this series promises to be rich with allegory. The pilot raises the specter of racial tension - the Adamas are Taurons, a disrespected minority group from a planet that apparently has no flowers - and the consequences of religious extremism. More overtly, “Caprica’’ will be a cautionary tale about the risks of artificial intelligence. “Battlestar Galactica’’ closed with a surprisingly cute montage of dancing robots. But the robots here are uniformly creepy, from the clunky proto-Cylons to the fleet of short, compliant machines that work as servants in the Gray- stones’ palatial home, and look like streamlined versions of R2-D2.

While the technology is inventive, fear, frustration, and anguish still drive the plot. We’re back in “Battlestar’’ territory, and that feels good.