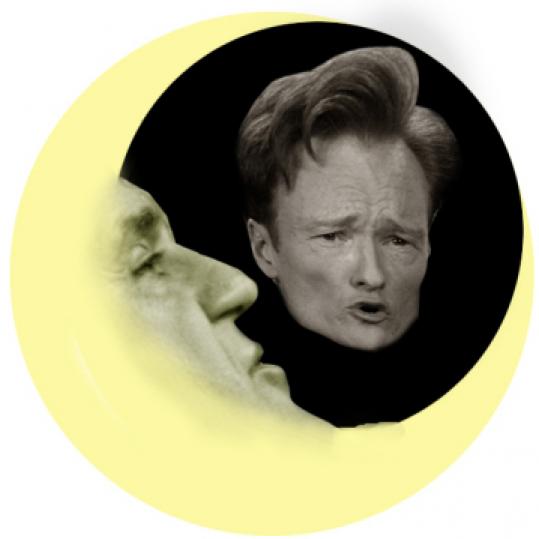 At the end of the day, what are Jay Leno and Conan O’Brien fighting for? A few one-liners, a series of kiss-kiss interviews, a wooden desk, and a coffee mug?

In the past 10 days, all of the network late-night hosts have been acting out their own little “Apocalypse Now.’’ While Leno and O’Brien battle over their futures at NBC, each feeling righteous and victimized, competitors such as Jimmy Kimmel and David Letterman have been gleefully firing their guns into the fray. Craig Ferguson, in particular, loves the smell of napalm in the morning.

But now’s the time to look at exactly what these men are scrapping over. Aside from the contract debates and the NBC dysfunctional-family blame game, the late-night war of 2010 is about some of the more dated, lax, and artificial material that makes its way onto the small screen. When you take away the sensational drama, which has been even juicier than the 1992 Leno-Letterman struggle for “The Tonight Show’’ chronicled in Bill Carter’s book and the HBO movie “The Late Shift,’’ all that’s left is an old TV genre in need of renascence. Late night could really use a new dawn.

In the past decade, late-night network TV seems to have been running on automatic pilot, with requisite and uneven stand-up monologues, vapid promotional interviews, and predictably kooky shorts. There are flashes of life here and there, of course, many of them from Ferguson and his outrageous bluntness. But after strikingly original developments by Letterman and O’Brien in the 1980-’90s, the format has just settled into being a kind of merry-go-round of variety- and talk-show conventions while the house bands play on. Even Letterman’s and O’Brien’s current shows are short on the post-bedtime anything-goes vibe that late night cries out for.

This inertia is part of the reason the “Leno Experiment’’ failed so miserably. What we saw when Jay Leno essentially relocated his 11:35 p.m. “Tonight Show’’ to 10 p.m. was the ugly truth about late night. In the brighter light of prime time, we could see how weak and unimaginative so much of the networks’ post-news TV - and so much of Leno’s work in particular - has become. Leno’s big change for “The Jay Leno Show’’ at 10 was to get rid of his desk, that old icon of late-night TV. But he never got rid of the desk in his mind, his dependency on formulaic late-night entertainment.

There was a time when the whole post-prime-time TV world, ruled by Johnny Carson, but also peopled with alternatives such as the plain-speaking Tom Snyder and the ever-curious Dick Cavett, seemed to have a tinge of glamour. It seemed like a time for adults who had a martini or two in them, with an almost rat-pack feel underneath the network TV restraint of the era. Maybe that’s why O’Brien pays such reverence to the “Tonight Show’’ moniker, calling it “the greatest franchise in the history of broadcasting’’ in his statement to viewers last week.

But times have changed, and so much of what once made “The Tonight Show’’ and its ilk unusual and distinctly after-hours is now extremely usual. Today’s late-night TV interviews with actors feel particularly empty, since countless shows and entire channels such as E! are devoted to the same chit-chat. Even Letterman, one of the first guys to wink knowingly to us while conducting these gabfests, has evolved into just another outlet on the promotional tour. His ironic attitude, when he lets it emerge from his now more domesticated disposition, is actually de rigueur for talk show hosts these days.

The more open sexual innuendo, the goofing on “real people’’ on the street, the musical guests - they’re all everywhere on TV now, even sometimes on the morning and daytime talkers.

In the ’00s, while network late-night TV fell into stasis, the most vibrant and culturally relevant ’round-midnight material was on cable TV. On Comedy Central, “The Daily Show’’ came into its own as a comedy-news-political-fact-checking hybrid and Stephen Colbert married caricature to timeliness. And on E!, Chelsea Handler, the rare woman on nightly late-night TV, turned celebrity-watching into a blood sport for laughs. These shows explored the cultural expressiveness and invention that late-night allows, the quality that makes it different from every other TV time block.

Maybe all the attention getting paid to the current late-night shakeup ought to start transcending the issue of time slot and seep into the very nature and design of the shows. Maybe, in the wake of the “Leno Experiment,’’ it’s time for some real experimentation.