‘Archer’ is a sly, witty spy cartoon for adults 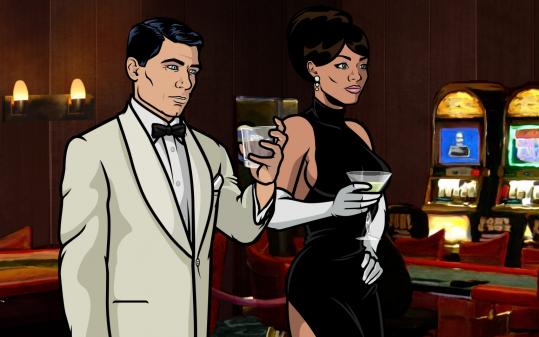 H. Jon Benjamin and Aisha Tyler give voice to two of the characters in “Archer, a new half-hour animated series on FX. (Fx)
By Matthew Gilbert Globe Staff / January 14, 2010

"Archer,’’ FX’s new animated series, recalls the early 1960s pop art of Roy Lichtenstein. It looks like those old superhero comic panels, but amped-up, tinged with winking irony, more vividly colored and shaded. The characters, who all work at a spy agency, have stiff facial expressions and talk in loud, clipped voices with lots . . . of ellipses . . . between words. Their bodies virtually glide on top of the still backdrops.

“Archer’’ is a full-on goof on the spy canon from “Dick Tracy’’ comic strips to James Bond and “The Man From U.N.C.L.E.,’’ and its retro, frozen-panel styling is only the tip of the parody iceberg. The show lifts all kinds of storytelling and character conventions from the likes of “Mission: Impossible’’ and heightens them to the level of absurdity. It’s like “Get Smart,’’ but with a sick, sometimes lewd, twist. The characters are familiar types - the suave master spy, his loyal butler, the older, wiser boss - but with perverse flaws that cry out for psychoanalytic attention. All employees at the International Secret Intelligence Service (ISIS), they’re Freudian disasters.

To wit, the handsome lead spy, Sterling Archer (H. Jon Benjamin), who is inept, vain, and nasty. He is the son of ISIS chief executive Malory Archer (Jessica Walter), and he has a serious obsession with her. He loves her and despises her at once. In the premiere, he tries to have sex with a woman while talking to his mother on the phone. Later, he becomes sexually aroused at the thought of his mother’s death. Malory, meanwhile, is a harsh taskmaster and a drug and alcohol abuser who at one point has phone sex in view of her son. So perfectly nasty as the matriarch on “Arrested Development,’’ Walter now deserves at least two slots in the pantheon of anti-maternal mothers.

ISIS also employs Archer’s ex-girlfriend, Lana Kane (Aisha Tyler), who is an amalgamation of blaxploitation heroines from the 1970s, such as Teresa Graves’s Christie Love and Pam Grier’s Foxy Brown. She’s kickass, but justice takes a back seat in her mind to interracial pornography and her personal vengeance toward Archer. She is dating nerdy ISIS comptroller Cyril Figgis (Chris Parnell) solely to get back at Archer, which we know partly because she keeps praising Cyril for not being Archer. In the background: an ISIS secretary (Judy Greer) whose profound identity issues cause her to change her name depending on whom she is talking to, and Woodhouse (George Coe), Archer’s tormented butler.

“Archer,’’ which was created by Adam Reed, whose credits include Adult Swim’s “Sealab 2021’’ and “Frisky Dingo,’’ does dabble in actual ISIS spy work. But the show is primarily about the office ensemble, as they jockey for power, romance, and sex. Underneath it all, the show is a workplace comedy. I like “Archer’’ because it succeeds where so many of the snarky animated series tend to fail. Reed and his writers and voice actors balance all the pop satire and raunch with a strong sense of the characters, so that the episodes ultimately rise above all the gags. In animation, as in every other genre, character matters.