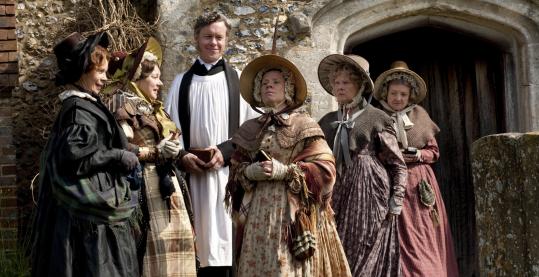 Yes, of course, “Return to Cranford’’ is a period piece. First big hint: It’s the new two-part installment of PBS’s “Masterpiece Classic.’’ Second big hint: It’s a continuation of “Cranford’’ from 2008, the miniseries based on the fiction of Victorian author Elizabeth Gaskell. Third big hint: Dame Judi Dench in a bonnet.

But this exquisite piece of work, which premieres tomorrow night at 9, has a contemporary heart beating beneath its frock. The theme of “Return to Cranford’’ is the Cranford community’s fear of new technology, as the steam railroad line makes its way to town in the middle of the 19th century. The tradition-bound locals, including Dench’s soulful Miss Matty Jenkyns, fight the coming of the train; they’re certain it will bring unhealthy distractions and turn the quaint Cranford into a Liverpool-like city of sin. Next stop: ugly industrial life.

Miss Matty and her friends might as well be groaning apocalyptically about the Internet and wireless technology. The train of global communications is in everyone’s town now, despite the angst of those who prefer old-school phenomena such as privacy, solitude, and uni-tasking. When Jonathan Pryce’s loyal, plain-spoken Mr. Buxton calls the railroad “a mania’’ in tomorrow’s “Return to Cranford’’ episode, he could as easily be a Facebook or iPhone naysayer. He’s enraged, not least of all because he knows his resistance is doomed. The train moves forward, it always does.

I love the way “Return to Cranford,’’ in concert with Gaskell’s work, steadfastly avoids simplicity in dealing with the rigors of progress. The miniseries honors the pastoral purity of Cranford, teases out its limitations, and grieves its passing, just as passionately as it weighs both the losses and gains of the new world. We see a gorgeous town that thrives on harmless gossip, where Mrs. Forrester (Julia McKenzie) treats her cow Bessie like a daughter, where qualities such as compassion still matter; but we discover that there isn’t a doctor within 10 miles of Cranford, and that young men are leaving because they can’t find enough work to support their families. Without change, Cranford will die, unbowed but completely broken.

Don’t let me paint “Return to Cranford’’ as a humorless study of Victorian small town life. There is a lot of comedy here, most often when it comes to Miss Matty and her xenophobic posse. When the ladies actually take a ride on the railroad, their fragile constitutions are thrown into happy chaos. Director Simon Curtis takes full advantage of the phallic symbolism of trains, making the experience almost orgasmic for them. Curtis wryly frames the ladies as a fabulous foursome in a few camera shots, like Carrie and her friends on “Sex and the City’’ only with girdles. As the uptight Miss Octavia Pole, Imelda Staunton brings new shades of humor to the cliche of the biddy, particularly when Miss Pole locks horns with a gift parrot.

The most engaging and lovely part of the series, though, is its soul, Miss Matty. She is an integral part of the Cranford old guard, but she loves youth, and fosters a motherly bond with her maid’s infant girl. Having once loved and lost, she fosters romance among the local singles while the other ladies prefer to disapprove of courtship. Miss Matty has reached a place of worldly wisdom that her friends, most notably the uppity Mrs. Jamieson (Barbara Flynn), will never know.

It’s almost a cliche to praise Dench at this point in her career; like Helen Mirren, or Cate Blanchett, she can pretty much do no wrong as far as I’m concerned. Dench makes Miss Matty into both a staid lady on the peripheries of life and a vibrant, pioneering heroine, without selling either quality too hard. She gives us a person standing bravely at the border between two worlds, reticent but advancing, growing older but getting younger at heart.