Stars bring to life words of the people 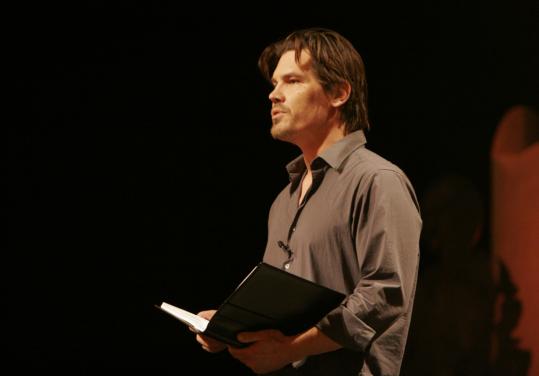 Josh Brolin reads from Dalton Trumbo’s 1939 antiwar novel, “Johnny Got His Gun,’’ in the documentary “The People Speak.’’ The program is based on books by historian Howard Zinn (below). (Greg Federman)
By Matthew Gilbert Globe Staff / December 12, 2009

In his books, historian Howard Zinn has helped honor and legitimize the power of the ordinary citizen. He has given us history through the words of “the people,’’ rather than from the perspective of government. It has been the people who’ve pushed our country out of war, out of slavery, out of genocide, out of legalized gender inequality. So many of America’s definitive freedoms have come from the bottom up, driven by grass-roots energy and individual heroism.

I was anxious about seeing Zinn’s “A People’s History of the United States’’ and “Voices of a People’s History’’ adapted for TV in the new History Channel documentary “The People Speak,’’ which premieres tomorrow night at 8. It seemed too possible that watching marquee movie and music stars on a stage reciting material written by history’s unelected spokesmen and dissidents might present viewers with an odd disconnect. Would the aura of fame and fortune surrounding the show’s dazzling cast - including Matt Damon, Josh Brolin, Bruce Springsteen, Jasmine Guy, Bob Dylan, Sandra Oh, Lupe Fiasco, and Benjamin Bratt - undermine Zinn’s alternative perspective? If this material is meant to celebrate ordinary people questioning policies and practices and making a difference, would the messengers negate the message?

Turns out the documentary, whose readings were filmed on stages in Boston (at the Cutler Majestic Theatre) and Los Angeles, works beautifully. The stars bring a full sense of drama and import to the voices of our democracy without turning the production into a pile-on celebrity vehicle. While an alternate to the History Channel movie featuring unknown readers would undoubtedly have its own virtues, “The People Speak’’ has vitality and momentum thanks to the skills of the performers. These seasoned actors and singers are able to highlight both the particulars and the general significance of the material they’re given.

Each passionate reading flows out of the previous one, with Zinn’s narration and historical footage serving as occasional punctuation. David Strathairn delivers a trio of potent texts, including the words of an admiral who spoke to Studs Turkel about “The Good War.’’ Danny Glover brings gravitas to Langston Hughes’s poem “Ballad of Roosevelt,’’ Brolin reads from Dalton Trumbo’s “Johnny Got His Gun,’’ and Kerry Washington reads Sojourner Truth’s speech “Ain’t I a Woman?’’ John Legend performs a traditional song, “No More Auction Block,’’ and reads Muhammad Ali’s 1966 comments against the Vietnam War. Elsewhere in the mix: Springsteen sings “This Land Is Your Land’’ and Dylan sings “Do Re Mi,’’ both by Woody Guthrie.

An activist and professor emeritus of political science at Boston University, Zinn has become a cult icon thanks to his iconoclastic point of view. Damon, who lived near Zinn in Newton as a young boy, has been trying to bring Zinn’s work to the screen for years. Indeed, Damon had his character in “Good Will Hunting’’ give Zinn a shout-out when he said to his therapist, “If you want to read a real history book, read Howard Zinn’s ‘A People’s History of the United States.’ That book will knock you on your ass.’’

Maybe the decadelong wait for “The People Speak,’’ whose executive producers include Zinn and Chris Moore along with Damon, was a gift. Right now, the president, Congress, and generals seem to be making an inordinate number of important international decisions; it might be an ideal moment for such a movie to remind us of the incredible amount of force that can lie dormant in the disenfranchised.

Of course “The People Speak’’ won’t change the world. It’s a gradually paced, two-hour movie whose action takes place almost solely in the movement of words and ideas. It’s a collection of stage readings and songs that asks us for more than the usual amount of TV-viewing attention. If you want to hear the people speak, you have to listen closely.

On: The History Channel