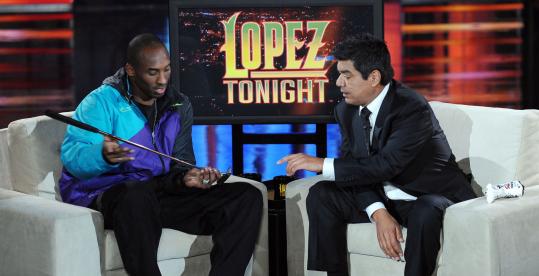 You can scrutinize the elements of a talk show in order to judge it. Is the set too cozy, or too cavernous? Are the segments - the monologue, the sketches - strategically ordered and paced? Are the interviews superficial, or meandering?

But the bottom line is between the host and you. How much do you like the humor and temperament of that person - this month’s late-night newcomers are Wanda Sykes, Mo’Nique, and George Lopez - and do you want to spend an hour at his or her disposal? It’s a subjective matter. Guests and musical performers come and go across a talk-show stage, but the host is your anchor for the night.

The three new late-night talkers are people of color - in terms of ethnic and racial identity, as well as in terms of personality. Taken together, Fox’s “The Wanda Sykes Show,’’ TBS’s “Lopez Tonight,’’ and BET’s “The Mo’Nique Show’’ represent a new step in late-night talk, a realm so famously crowded with unerringly cool, straight white men, from Jack Paar and Johnny Carson to Jimmy Fallon and Jon Stewart. Or at least they further the step initiated by “The Arsenio Hall Show,’’ which aired on Fox from 1989-1994. Along with Chelsea Handler’s “Chelsea Lately’’ on E!, the three new late shows stand for the kind of diversity that has already reached daytime and prime time TV, not to mention the Oval Office.

Lopez didn’t let the moment pass unnoticed during his first show on Monday night. Addressing his standing audience, which we knew via the many camera close-ups was composed of different colored faces, he announced that he was “bringing change to late-night TV.’’ Amid loud cheers, he said: “This is what America looks like. It’s young, it is old, is it black, it is white, it is Asian, it is Latino.’’ In a cameo to deliver her well wishes, Ellen DeGeneres was also diversity-conscious, saying, “Everybody needs to be represented on television.’’

But despite all the cultural significance, the success of each of these new shows will come down to the host and his or her connection to viewers. Lopez has a full-throated energy and a weakness for sophomoric guy humor that can be grating, especially since his show will air Monday through Thursday nights. Hoarse, but still yelling, he fills his opening monologues with too-familiar material about short people, marital sex, and flatulence. His interviews, with the likes of Eva Longoria Parker, Kobe Bryant, and Jamie Foxx, are too filled with praise and plugs to be genuinely engaging.

Can’t we forget about all the we-are-not-worthy worship of famous folks? We are worthy. Granted, the love-fest atmosphere on “Lopez Tonight’’ may simply be the result of first-week euphoria. Perhaps Lopez will calm down, and find a more even-keeled, livable groove. Right now, his gusto is wearing.

On “The Mo’Nique Show,’’ nightly at 11, comedian and, now, movie star (“Precious’’) Mo’Nique also needs to pander less. More than most late-night talk hours, which stay focused on the host even during interviews, “The Mo’Nique Show’’ is built primarily around the guests. And too much of the time, Mo’Nique seems bent on turning her chats - with, say, Lenny Kravitz or Sean Paul - into rallying tributes to the celebrity’s oh-so-groundbreaking work. To me, all her passionate praise - and, in some cases, lust - only serves to diminish the guest. You know, as in, “Well he’s not all that.’’

Mo’Nique was tartly funny on the sitcom “The Parkers,’’ but on her own talk vehicle she’s too childlike to take command. She’s lovable, and raunchy, but she seems lost without a script. Her repetitive, cutesy facial tics are endearing until they start looking strained.

If you like Wanda Sykes’s standup comedy, you’re probably going to like her weekly “Wanda Sykes Show,’’ which airs Saturday nights at 11. She was openly political and transgressive - and defensive of President Obama - throughout her first episode. Sykes’s first joke was a knock on Ann Coulter and her batting eyebrows, and she never let up on the leftie punches, noting, somewhat correctly, “Let me be the first person on Fox not to pick on President Obama.’’ In what amounted to her mission statement, she said, “The Obamas, they’re way too classy to get all up in people’s faces. So that’s why I’m here.’’

I like the way Sykes’s political brashness is balanced by her knowledge of the specifics of her targets. Clearly, her heart is behind her humor - she’s not just tossing soft political zingers like Jay Leno or David Letterman, because they’re expected in a late-night monologue. She has the outrage of Stewart, as she plays with fake-news material that has layers of truth behind it.

Sykes, who is gay, is not only bringing a different face to late night, like Mo’Nique and Lopez; she is also attempting to push beyond the usual celebrity-based entertainment fluff that the other two embrace. Yes, it’s powerful to see diversity reflected in different corners of TV, to see a host like Lopez dropping Spanish phrases into a monologue. Lopez, Mo’Nique, and Sykes are all willing to make racial and ethnic references that white hosts might tiptoe around or not think of. But still, diversity doesn’t negate the ever-present need on TV for creative ambition.

One thing I love about “The Daily Show’’ and “Chelsea Lately’’ is that they are both a half-hour long. All three of these new shows would benefit from the shorter length, especially the weeknightly “Lopez Tonight’’ and “The Mo’Nique Show.’’ The hourlong format is a convention worth rethinking. Sometimes, even when you like a host, more is a bore.

THE MO’NIQUE SHOW On: BET