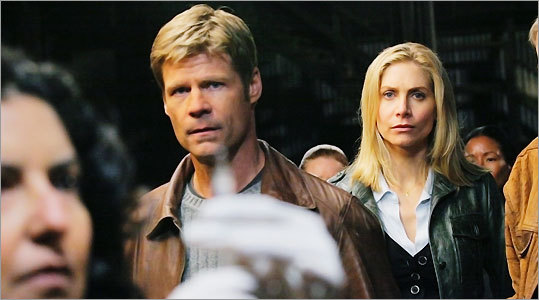 Like some of the best sci-fi, ABC’s “V’’ is bursting with allegorical possibility. The alien “Visitors’’ who come to Earth appear as attractive GQ models, and they try to seduce us into cult-like devotion to them. They promote peace and prosperity, glowing with the tranquillity of the “after’’ photos on antidepressant ads. They’re particularly interested in appealing to teenagers, as their ships hover over the cities of the world like ultimate video games. Among the Visitors’ promises: “Complete medical services to all’’ - yup, universal health care.

In the course of the compelling first episode, tonight at 8 on Channel 5, “V’’ got me thinking the Visitors could represent organized religion, or the commercial entities waging war on the souls of young America, or blind political loyalties. They could stand for any fascistic or destructive force that lurks behind a seductive face. And the health care comment made me wonder if “V’’ was also alluding to President Obama, casting doubt on his composed allure in the way “24’’ stokes suspicion about letting our national defenses down.

At one point tonight, the alien leader, a lovely but robotic woman simply named Anna (Morena Baccarin), tells an international TV audience, “Embracing change is never easy, but the reward for doing so can be far greater than anything you can imagine.’’ Doesn’t Obama own the trademark on the word “change’’? Hasn’t he been accused of the kind of dispassion that Anna, whose speech is as even-toned as that of a voice-mail operator, cultivates so effortlessly?

But no gold mine of symbolism is worth a damn when the show itself doesn’t have good old storytelling mojo behind it. And, based on the premiere, “V’’ has enough narrative drive and character definition to pull viewers into the creepy suspense of its dystopian world. While ABC’s “V’’ (led by writer-producer Scott Peters of “The 4400’’) may not persuade the reverent fans of the 1980s series and miniseries from which it is adapted, it’s the kind of science fiction that’s human-based enough to capture the imagination of a mainstream audience. This isn’t for tech geeks only. That the new “V’’ also incorporates “sleeper cell’’ language and 9/11 imagery into its mythology also adds to its contemporary currency.

Indeed, the opening moments clearly evoke the events of 9/11, as New York quakes and a plane hits the street and explodes. In an effectively intriguing touch, the show gives us our first glimpse of the alien spaceships in the reflection of skyscrapers, as they move into their hovering position like dark gray clouds. Some people feel born again as Anna assures them, with a phrase she reuses often, that “We are of peace, always.’’ Others, including the priest Father Jack Landry (Joel Gretsch) and the FBI counterterrorism agent Erica Evans (Elizabeth Mitchell), are suspicious. When an older priest defends the aliens as “God’s creatures,’’ Father Landry replies, “Rattlesnakes are God’s creatures, too, but that doesn’t mean they’re good to us.’’

The polarizing effect of the Visitors grows as they work to convert the public, “spreading hope’’ - another Obama word - with magical healing centers and tours of their spaceships. They begin a “Peace Ambassador Program’’ to enlist young people in their cause, and Erica’s son, Tyler (Logan Huffman), joins up. Anna uses news anchor Chad Decker (Scott Wolf) to get her message to TV viewers through a neutral personality. Meanwhile, a resistance, which will eventually lead to an explanation of the show’s title, gains momentum.

The acting is good all round, but I was particularly drawn into Baccarin’s portrayal of Anna. Her Zen calm and wide-eyed look is both beautiful and creepy in equal parts, particularly as more information about the true appearance of the aliens emerges. Wolf is well cast as a guy with a TV face and a hunger for attention that may - or may not - overwhelm his personal ethics. And Mitchell (from “Lost’’) is both easy to root for as an action heroine and sympathetic as a divorced mother with parenting issues. She’s the perfect antithesis of Anna, as her every emotional shift seems to pass across her face.

Will “V’’ make it? I’m hoping ABC handles this promising show carefully and shrewdly. The network is giving “V’’ a four-episode run this month, and then pulling it until after the Winter Olympics in March. Possibly, this “pod’’ approach, as the network is calling it, will create a buzz for “V’’ before it returns, in the way last May’s premiere of “Glee’’ built anticipation for the show’s full fall run. But there’s no easy way to pull viewers into a serial-based story, especially when it’s science fiction. I’m hoping Anna and her fellow Visitors make it over that particular resistance.