It's high time for TV to embrace sci fi 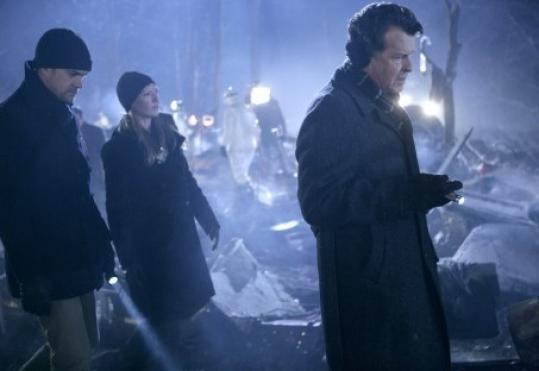 If only we had learned, a little earlier, that “Dollhouse’’ was about the end of the world.

Fox’s science-fiction series took a while - a whole season, in fact - before it let us in on that pertinent fact, sacrificing a potential audience in the process. Sure, the Friday night show, from “Buffy the Vampire Slayer’’ creator Joss Whedon, came with a creepy concept in the Philip Dick vein: an evil company can erase and replace people’s memories, and sends a stable of “actives’’ into the world with new personalities, fitted to clients’ requests. The show was meant to be a meditation on identity, gender, exploitation. But for much of its first season, “Dollhouse’’ felt more like soft-porn fantasy for the Comic-Con set, as star Eliza Dushku went on “engagements’’ as essentially a high-tech prostitute.

Then came an unaired 13th episode called “Epitaph One’’ - available on iTunes and on the first season DVD set - that tells a richer, broader story, set a decade in the future. The Dollhouse mind-wiping technology has gotten into the wrong hands, mind-controlled zombies roam the streets, and a tiny corps of survivors, led by Dushku’s consciousness in someone else’s body, are trying to save the world. Now that’s science fiction. And now that we know what’s coming, this current season of “Dollhouse’’ has an under current of doom and a much stronger sense of purpose.

“Dollhouse’’ suffers from perilously-low ratings, and there’s a good chance it won’t last. But the show’s strange trajectory offers lessons about how to better unspool a science-fiction series. For some maddening reason, Fox is still shying away from letting viewers know precisely what “Dollhouse’’ is; the network’s second-season promos didn’t mention a dystopia at all, and instead showed Dushku in leather pants, posing suggestively with a gun. It’s as if the network doesn’t trust viewers to accept science fiction on its own, dark, sometimes-convoluted terms.

Fox seemed similarly cautious about “Fringe,’’ its Thursday night series about an FBI unit that investigates the unexplainable. Last season, the series quickly fell into a rut as a mystery-of-the-week procedural: Special Agent Olivia Dunham would discover some unexplainable phenomenon, and mad scientist Walter Bishop would remember that he had experimented on just that thing back in his crazy LSD days. Things were allowed to get only too weird before they had to be tied in a neat little knot.

But the series took a major shift at last season’s end. Viewers learned that one of the main characters - unbeknownst to himself - was stolen from a parallel universe, in a grieving parent’s effort to replace a child who died. Dunham visited an alternate reality and met Leonard Nimoy, the embodiment of sci fi for its own geektastic sake. And when the show leaped fully into mind-bending territory - and started to wrestle with dark themes about identity and loss - it shifted from a passable “X-Files’’ knockoff to a more compelling mystery. Now, “Fringe’’ feels more melancholy, more disturbing, and definitely more watchable. (Lead actress Anna Torv’s stiff persona still burdens the show, but Torv seems less wooden next to Nimoy.)

Science fiction has always had the potential to cross over into the mainstream; fans of ABC’s “Lost’’ stuck around when the show started mining the intricacies of closed-loop time travel theories. And SciFi’s “Battlestar Galactica,’’ which concluded last spring, proved that viewers have a tolerance for unrelenting darkness. In fact, the most unsatisfying thing about the series was that it had an uncharacteristically happy ending.

Yet even a network devoted to science fiction seems afraid to get caught in a genre rut. The network recently changed its name to Syfy - the better to pretend that it’s not just for the Trekkie types - and offered up a lighter, gentler version of science fiction with the female-friendly “Warehouse 13.’’ The show is campy, filled with cheesy effects and endless banter, and while it’s been a hit for Syfy, it feels a bit like a cop-out; the screen lights up most when CCH Pounder, the series’ creepiest character, drops in for occasional, ominous scenes.

Much more promising is “Caprica,’’ the “Battlestar Galactica’’ prequel set to premiere in January. The two-hour premiere, about the dangers of artificial intelligence, is imbued with a sense of doom, and some scary-looking robots to boot. Like “Battlestar Galactica’’ (and “Dollhouse,’’) it proves that the best science fiction is allegory - a way to extrapolate present-day problems to dangerous extremes. Here’s hoping that ABC’s upcoming series “V,’’ the remake of the 1980s alien invasion miniseries that premieres Nov. 3, follows that mold and imbues its story with some of today’s toughest themes.

If anything can save ABC’s creatively-struggling “FlashForward,’’ it will be that distinctive sci-fi mix of parable and horror. The series began with an intriguing and well-produced pilot, in which everyone on Earth lost consciousness and glimpsed the same moment, six months into the future. But since then, the show has unfolded with maddening thorniness and logic so circular that it gets in the way of suspended disbelief.

An FBI agent has a vision of a bulletin board filled with clues about the blackout. So whenever he sees an artifact from his vision, he puts it on the board, so his future self will see it as important. Does he have photographic memory? Is he just kind of dumb? And if he is, do we care whether he starts drinking again, or breaks up with his wife?

There’s some hope that, in coming weeks, we’ll be seeing a little less of the wheel-spinning FBI agents and a lot more of the bona fide bad guys - including Dominic Monaghan, formerly of “Lost.’’ And there have been a few moments when “FlashForward’’ has slowed down and delivered what the pilot promised so beautifully: a futuristic glimpse of disaster. One recent episode opened with a flashback to the blackout, a slow-motion bus crash set to Bjork’s “It’s Oh So Quiet.’’ It was spooky and unsettling, the most satisfying sequence in the series to date. And it was proof that the networks don’t need to shy away from the creepiest stuff. Go ahead. Lay it on us. It won’t be the end of the world.