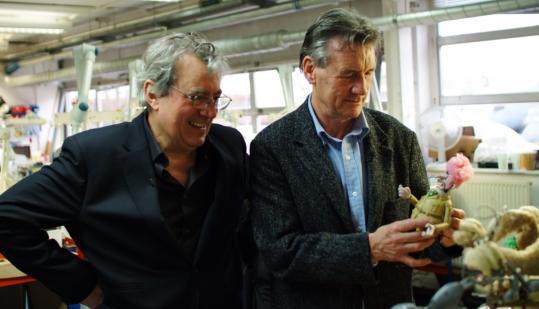 A famous Monty Python sketch concludes with a penguin exploding on top of a television set. The six-part documentary “Monty Python: Almost the Truth (The Lawyer’s Cut)’’ does that sketch one better. It cuts out the middle man - or, rather, penguin - and begins each episode by blowing up a television set.

That’s as it should be. For nothing in the history of the medium has so thoroughly, or enduringly, exploded its conventions as the 45 episodes of “Monty Python’s Flying Circus.’’ You name it - form, content, good taste, even something so fundamental as sexual differentiation (why do those nice young men keep dressing as women?) - boom, boom, and BOOM.

“Python’’ ran on the BBC between 1969 and 1974. So this year is the series’ 40th anniversary. (PBS started broadcasting “Python’’ in the United States in 1975. The first station to pick it up was in, of all places, Dallas.) The anniversary is the occasion for the documentary, which runs in hourlong segments on IFC, starting tomorrow night and continuing through Friday.

The five surviving Pythons - John Cleese, Michael Palin, Terry Jones, Eric Idle, and Terry Gilliam (the sole American in the troupe, he was responsible for the show’s animated bits) - sat for extended interviews for the documentary. Encouraging their cooperation is the fact that one of the directors, Bill Jones, is Terry’s son.

Graham Chapman, who died in 1989, takes part, too, through skillful use of footage from period interviews. There are also snippets from interviews - sometimes insightful, usually repetitive or superfluous - with a lot of comedians who are Python fans. Most are British, including Steve Coogan, Russell Brand, and Eddie Izzard. This side of the Atlantic is heard from, too: Dan Aykroyd, Seth Green, Jimmy Fallon.

As one might expect, the Pythons remain very smart and very funny (Cleese remains funny and prickly). As one might hope, they also remain ardently irreverent - not least of all about their own achievements. Best of all, they’re extremely articulate. Unfortunately, this makes the non-Python talking heads seem all the more beside the point.

Tomorrow night’s episode looks at each Python’s early days and how they came to work together. “The Goon Show,’’ the zany BBC radio series featuring Peter Sellers, left all the British members gobsmacked, as did “Beyond the Fringe,’’ the stage revue written by Peter Cook, Jonathan Miller, Dudley Moore, and Alan Bennett. The biggest influence on Gilliam was the humor magazine Help!

The next two episodes deal with the series proper - or improper, as the case might be. “It grew on people,’’ Idle says with equal parts nonchalance and bemusement. Even with all the impact “Python’’ has subsequently had on comedy obscuring its originality, the series’ essential daring and proud silliness (“absurdity’’ would be a more pretentious word) are unmistakable.

The final three episodes get a bit anticlimactic. They take in the Python films “Monty Python and the Holy Grail,’’ “Life of Brian’’ (which began with Idle’s casually mentioning the phrase “Jesus Christ’s lust for glory’’), and “Monty Python and the Meaning of Life.’’ There are bits from “Monty Python Live at the Hollywood Bowl’’ and Chapman’s memorial service (which managed to be both hilarious and touching). “Monty Python’s Spamalot,’’ the hit musical Idle put together, gets some attention, too, before things pretty much peter out.

“Monty Python: Almost the Truth (The Lawyer’s Cut)’’ - the title has just the right Python flavor - is a treat, if not a revelation, for fans. This is very well plowed ground, after all. As for the as yet uninitiated, what they don’t find baffling they’ll likely find excessive. Better to head to YouTube, which has a dedicated Python channel, to get a sense of what the four-decade-long fuss has been about. “Dead Parrot,’’ “The Lumberjack Song,’’ “Cheese Shop,’’ “Piranha Brothers,’’ “Argument Clinic’’: Forget about your televisions. It’ll be your computers that are exploding.