‘Seinfeld’ reunion nothing short of brilliant 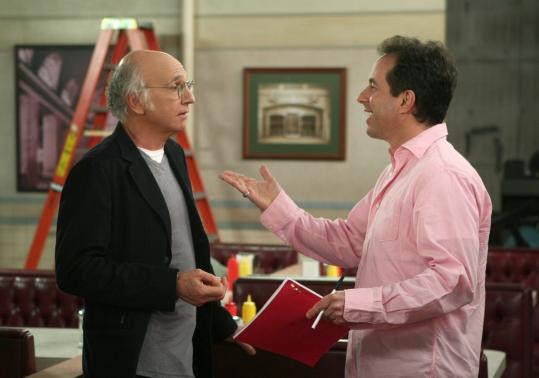 Track this scene from tomorrow night’s “Curb Your Enthusiasm,’’ if you can. Playing “Larry David,’’ Larry David, who is the model for George on “Seinfeld,’’ is telling Jason Alexander’s “Jason Alexander,’’ who played George, that he wants to make a “Seinfeld’’ reunion in which George angles to get his ex-wife back, which is what “Larry’’ is doing by creating a “Seinfeld’’ reunion in which he can cast ex-wife Cheryl as George’s ex-wife.

As we all know, network reunion shows tend to be paycheck-driven vehicles that only mar a classic sitcom’s legacy. I still cringe at the thought of the 2000 “Mary and Rhoda’’ reunion movie. And Larry agrees: “You know those reunion shows,’’ he says to his agent Jeff (Jeff Garlin) tomorrow night. “They’re so lame.’’ But the thought of winning Cheryl back by getting the “Seinfeld’’ cast together again is irresistible to our self-serving hero, and so he proceeds against his better aesthetic judgment. He individually seduces Jerry Seinfeld, Julia Louis-Dreyfus, Michael Richards, and Alexander into a deal with NBC, as part of his master plan. (Seinfeld, Alexander, and Louis-Dreyfus have appeared on “Curb’’ separately in previous seasons, but this season they’ll appear together and with Richards for the first time.)

Some of tomorrow’s sharpest moments come during Larry’s lunch with Alexander. In justifying Larry’s proposal to himself, Alexander imagines the reunion as a subtle way of saying, “We know, we know, we’re sorry’’ to “Seinfeld’’ fans for the universally panned series finale in 1998. Larry, who wrote the finale, squirms. Alexander also calls George Costanza “selfish’’ and “stupid’’; more squirming. And lurking behind all the episode’s little jokes, there’s a big fat goof on NBC, whose executives are shown hungering for a shallow run-of-the-mill reunion. The “Curb’’ portrayal of NBC sets HBO’s sophistication and meta-ability into favorable relief.

Tomorrow’s episode also includes plenty of the usual adventures of Larry, as he is both offended by and offensive to almost everyone he sees. While the “Seinfeld’’ guests dominate the half-hour, Susie (Susie Essman) is nonetheless on hand to go through her familiar motions - greeting “La’’ warmly at first and later going ballistic on him. Her swear-filled screaming on “Curb’’ is music to my ears, even seven seasons in. Like the show’s amusement-park soundtrack, Larry’s daily life continues to be sick fun - a merry-go-round stuck in a vicious, and endlessly hysterical, circle.