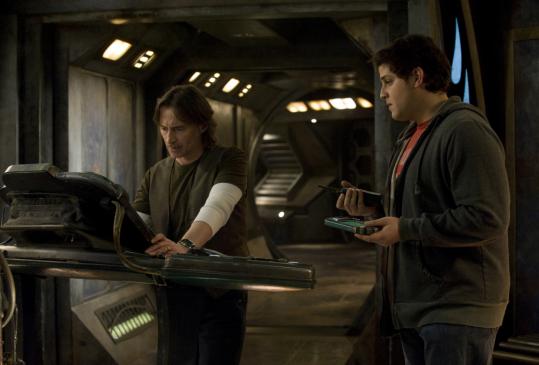 Science fiction series are notoriously hard to enter midstream. Syfy’s “Stargate’’ franchise, for instance, features a deep and slightly convoluted mythology, developed over the course of a feature film and three TV series, involving ancient alien visits and hieroglyphics, with Beau Bridges somewhere in the mix.

It already has a substantial fan base, but the network formerly known as Sci Fi wants more: It’s working to attract a broader audience, and to appeal to both classic science fiction fans and viewers who aren’t quite so hardcore. So the premiere of “Stargate Universe,’’ an eye-catching new series that premieres tonight at 9, tries to appeal to everyone - walking us quickly through the mythology and technology, so as not to bore the old fans or bog down the new ones.

It goes a little too fast for a newbie like me, but here’s my shady understanding: an ancient civilization has left behind teleportation devices called “stargates,’’ which allow people to travel through wormholes to faraway parts of the universe. They’re used today, unbeknown to most people on Earth, by a top-secret military operation. And when a hidden base on a faraway planet comes under attack, some survivors run through a stargate and find themselves on an ancient alien ship, set on autopilot, and very, very, very far from Earth.

Tonight’s opening sequence finds them emerging through the stargate and onto the mystery ship, and the scene is stunning, scary, and quite cinematic: They’re thrown violently, one after the other, and followed by heavy boxes of equipment. The production values here and throughout are strong, as is the cool space-age technology: flying camera balls, gorgeous starscapes, an ancient communication device that allows you to occupy the consciousness of somebody on Earth.

Still, the emphasis is on the characters, many of whom have secrets, deep troubles, and mysterious pasts. They’re played by some formidable actors; the always-wonderful Robert Carlyle is most notable as Dr. Nicholas Rush, a single-minded scientist who tries to influence the operation. Brian J. Smith is striking as a lieutenant, thrust into leadership when his commanding officer is hurt. And David Blue provides comic relief as a super-smart kid who’s recruited to the space operation after solving a puzzle embedded in a video game. Think of him, in “Lost’’ terms, as Hurley lite, hurled through the universe.

In fact, quite a bit of this series feels like “Lost’’ in space, and it is - early “Lost,’’ before things got all Others-y and time-travel-bogged, when it was largely about unlocking characters’ mysteries and playing with grand themes. “Stargate Universe’’ isn’t quite so ambitious, but it’s intriguing in its way, down to the ship, bathed in blue light, that emerges as a character in its own right. The ship is more interesting thus far, alas, than any of the female characters, but perhaps that will change over time. As “Battlestar Galactica’’ proved not long ago, deep mythology is much more fun if it surrounds a lot of complicated people.