Another killer season of ‘Dexter’ 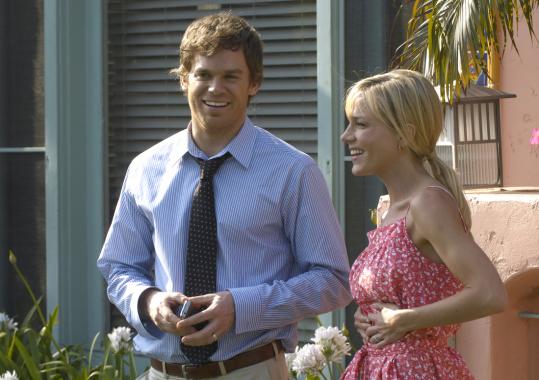 ‘Wanna know a secret?’’ Dexter Morgan asks his infant son in the fourth-season premiere of Showtime’s “Dexter.’’ Holding a bottle of milk up to the adorably squishy tyke, he says, “Daddy kills people.’’

You’ve got to love the makers of “Dexter,’’ which returns tomorrow at 9 p.m. They toy with us so shamelessly, plopping their serial killer down right next to the most innocent thing in the world: a newborn. There’s our violent vigilante, the self-labeled “Dark Passenger,’’ now doing business as a loving husband and father of three living smack dab in the middle of suburbia. He’s creepy in that context, almost like a one-man sleeper cell.

And then we see Dexter next to the murderers he stalks down - the ice-cold Ice Truck Killer in season 1, the borderline Lila in season 2, the ethically distorted Miguel Prado last season, and now John Lithgow’s repugnant Trinity Killer. Beside those codeless savages, Dexter seems almost admirable, even kind of superheroic. At least he’s trying to clean up the streets, right?

Thankfully, this season “Dexter’’ continues to play with our moral bearings, which is the show’s best quality. “Dexter’’ is definitely a well-made crime thriller that will keep you riveted even when, as happened last season, the pacing is off. But “Dexter’’ also offers an added philosophical punch, so that when you think about “Dexter,’’ you may also find yourself thinking about issues of capital punishment and vigilantism in different ways. Is Dexter better than the killers he kills? Or the same?

No, “Dexter’’ has not evolved into a college seminar. There’s black comedy aplenty this year, as always, as Dexter Google-Maps potential victims, or as he sings “America the Beautiful’’ over the speakerphone to his baby while looking at blood-strewn victims on his computer. In a great metajoke, Dexter goes through the morning routine of the show’s titles sequence - but this time with baby puke on his shirt.

This season will also feature a few interesting new secrets lurking among the supporting characters, in addition to Dexter’s stealthy lifestyle. I won’t spell them out and spoil them, but I will say that there’s a workplace romance taking place on the down low, there’s a cop who’s stealing, and there’s an old romance rekindling. And the supporting cast members vividly play out these story lines, particularly Jennifer Carpenter as the ever-explosive Deb.

Lithgow, whose Trinity Killer kills in threes, may actually one-up Dexter’s nemeses of past seasons in terms of gore. His psychopath is a particularly grisly fellow; despite ever-growing popularity, “Dexter’’ has not toned down the horror. In one scene later in the season, Trinity brings on the kind of brutal psychological torture that will make you squirm. I’ve resisted Lithgow since his “3rd Rock From the Sun’’ years, because he was so endlessly and painfully broad on that sitcom. But he seems to fit in smoothly on “Dexter’’ - monstrous in all the right ways.