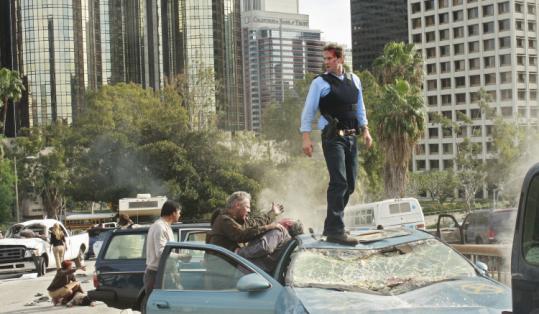 Give ABC a lot of credit for ambition. Ever since the network struck paydirt with “Lost,’’ it has tested a string of unfolding-mystery serials, leading to some false starts (last year’s intriguing “Life on Mars,’’ which ended early and oddly) and some notable failures (2006’s “The Nine,’’ which had a promising start but fell apart fast). Still, executives haven’t given up on the idea that people like their TV viewing with a side of thought. In November, they’ll launch a new version of the ’80s sci-fi miniseries “V,’’ and Thursday at 8 comes the much-anticipated premiere of “FlashForward.’’

Like the series that have come before it, “FlashForward’’ boasts big-money production values, boffo destruction sequences, strong-ish women and sensitive manly men, along with an intriguing premise: On a sunny morning not long from now, everybody in the world blacks out for 2 minutes and 17 seconds. When it happens, cars crash, airplanes careen into buildings, surgeons clunk to the floor in the middle of operations, and most people have what seem to be extremely vivid dreams. But as the characters start recounting and cross-referencing what they saw, they discover that these weren’t dreams at all, but glimpses into the same moment, six months in the future.

Leading us on the discovery process is FBI agent Mark Benford (Joseph Fiennes), an earnest family man who recently kicked a drinking habit. He spies his future self doing something he doesn’t like, and the same goes for his wife, a surgeon played by Sonya Walger. (She’s Penny on “Lost,’’ for those keeping track.) We also check in with Mark’s Alcoholics Anonymous sponsor (Brian F. O’Byrne), the Benfords’ baby sitter (Peyton List), and Mark’s co-worker, Demetri Noh (John Cho), who doesn’t see a thing, and has a sinking feeling about what that might mean.

Tonight’s episode is dramatic and well-paced, unfolding ominously and quickly explaining the issues at hand. The problem, of course, is the future. What “Lost’’ had on its side was a desert-island setting, plus a sprawling and quirky ensemble cast with a range of back stories to spin. Not all of them panned out - we haven’t really suffered from the loss of Shannon and Boone - but there were many opportunities for emotional investment, not to mention comic relief. The flashback structure could be maddening at times, but it deftly laid the groundwork for the show’s current exploration of time travel and destiny.

“FlashForward’’ is set less imaginatively in Los Angeles, spends a lot more time in standard high-tech office buildings, and leaps more quickly into the big themes, most notably the question of whether the future is set in stone. Fiennes and Walger are nice to look at, but thus far don’t show any special chemistry or unusually watchable qualities. In coming episodes, the show will introduce more characters - Dominic Monaghan, formerly Charlie on “Lost,’’ will show up as a supersmart scientist - and try to deepen the mystery. But it remains to be seen if a strong start can sustain itself for 13 episodes, let alone more.

This is what you get for bold ambition: The challenge is certainly greater than it would be to spin out yet another crime-solving procedural. But the payoff is a lot bigger, too. “FlashForward’’ is a good idea, and while that’s no guarantee of a good series, the first hour gives us reason to hope.