‘Family’ is domestic bliss with a modern twist 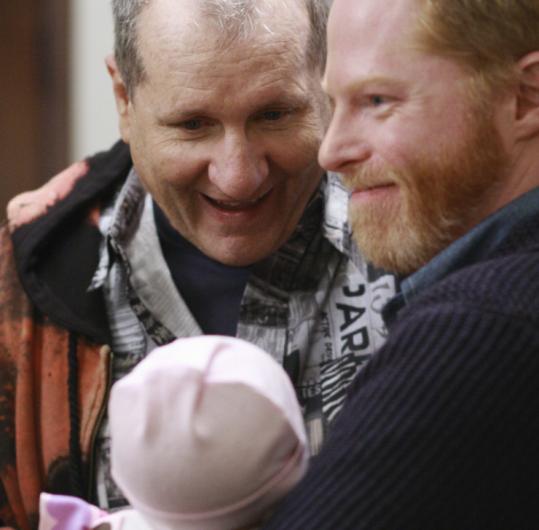 Pop cultural anthropologists dig sitcoms. Oddly enough, those harmless, sometimes grating slivers of mass entertainment can double as valuable artifacts. Scrape off the contrivances and zany punch lines, and you can see shifting and conflicting social definitions at play. When it comes to family sitcoms, you find old-fashioned gender roles in “Make Room for Daddy,’’ a blended fantasy on “The Brady Bunch,’’ gay-straight coupling on “Will & Grace,’’ and workplace kin on “30 Rock’’ - all somehow reflective of the fears and wishes of their time.

So what does ABC’s truly enjoyable new “Modern Family,’’ a comic look at three clans, divulge about the American family circa 2009? Hard to say exactly - something about the particularity of each family unit as uniformity fades away and nuclear, blended, gay, and interracial families all coexist in suburbia It’s not just the cities that are diverse anymore, the show implies. But really, it’s too early to take a big-picture look at “Modern Family,’’ which premieres at 9 p.m. on Channel 5, even while the title practically demands cultural analysis.

It’s not too early, however, to heap praise onto this astute, well-written show and its many specific wonders. “Modern Family’’ follows a “traditional’’ family (mom, dad, three kids), a gay male couple with a baby, and an older man with his younger Latina wife and her 11-year-old son. The show is structured as a mockumentary group portrait, which, contrary to common belief, was not invented by the makers of “The Office.’’ The mockumentary has wended in and out of vogue, with 1984’s “This Is Spinal Tap,’’ with the Christopher Guest movies, with Tim Robbins’s “Bob Roberts’’ in 1992. It’s a great way to play absurdity off of mundane reality, and it has extra zing these days, as a scripted take on reality TV.

Phil (Ty Burrell) and Claire (Julie Bowen) are the mom and dad dealing with TV’s more familiar parenting issues. Phil, played with perfect dorkiness by Burrell, is obsessed with appearing hip. His kids are horrified as he misuses hip-hop lingo, reenacts the dances from “High School Musical,’’ and explains that “WTF’’ stands for “Why the Face.’’ He’s so bent on being liked, he can’t discipline them. He is the most “Office’’-like element in “Modern Family,’’ a home variation on Steve Carell’s Michael Scott.

Mitchell (Jesse Tyler Ferguson) and Cameron (Eric Stonestreet) are the gay couple who’ve just brought a baby girl back from Vietnam. They’re not typical TV gays, in that they’re not Bravo-channel specimens of fashion fabulousness. But they bicker lovingly, particularly since Mitchell struggles with anxiety and self-loathing. In a tart little scene on the plane back from Vietnam, Mitchell is certain everyone is judging them for being gay parents; but then his assumptions end up being the object of the comedy.

Jay (Ed O’Neill) and Gloria (Sofia Vergara) are newlyweds, although strangers tend to think he’s her father. He’s an insensitive guy who thinks her son, Manny (Rico Rodriguez), ought to butch up. Unlike the more contemporary Phil, he has no interest in bonding with the kid. All of O’Neill’s primitive “Married . . . With Children’’ baggage works in his favor here. Gloria is more passionate than Jay, and she’s hell on wheels to the other moms at the kids’ soccer games.

“Modern Family,’’ created by Steven Levitan (“Just Shoot Me’’) and Christopher Lloyd (“Frasier’’), has an easy rhythm going for it right from the start, as it toggles between little domestic set pieces and interviews with the characters. There’s nothing flashy about the show - none of the pop-cultural pizzazz of “30 Rock’’ or the sex jokes of “Two and a Half Men.’’ If you’re expecting a laugh riot, you’ll probably be underwhelmed. “Modern Family’’ finds its humor in the variety and eccentricity of the characters, in the fact that Anytown, USA, doesn’t really look like “According to Jim.’’