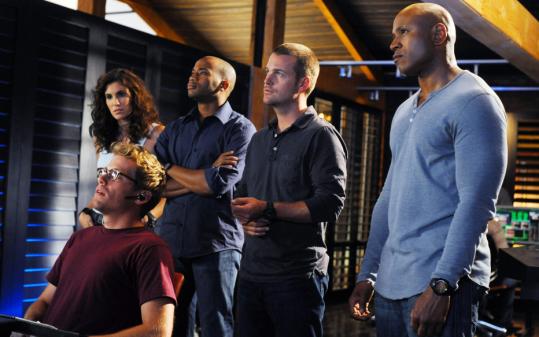 Of all the TV networks, CBS is probably the least experimental, and it’s no surprise why: Its lineup of high-tech crime-solving shows brings in such robust ratings that there’s no need to, say, hand off five hours of weekly prime time TV to a safe and established comedian.

So on the heels of the successful “NCIS,’’ about an elite Navy police force, comes a new series called, “NCIS: Los Angeles,’’ about another elite Navy police force helmed by Chris O’Donnell and LL Cool J. According to the press release, their special unit “is charged with apprehending dangerous and elusive criminals that pose a threat to the nation’s security.’’ In practical terms, this means each hour will be devoted to yet another murder mystery with the attendant twists, turns, and brief gunfights, plus a satisfying solution reached in record time.

What’s particularly LA about this show is mostly the locations, in a parched and sun-drenched landscape, and the agency’s headquarters, housed in what appears to be a Spanish Revival-style villa. (There’s also the inescapable fact that the characters all look like . . . actors.) The crime fighting emanates from a secret back room filled with technology and the expected cast of secret-agency characters: an eager young recruit who spews extraneous facts; a lone female agent, hot but not too hot; a smartypants tech-support guy who can hack into anything; and, in what might be a nod to CBS’s hit crime-solving show “The Mentalist,’’ an “operational psychologist’’ who can discern what witnesses are really thinking. (Characters like this always make me think of the superpowered “empath’’ in “Star Trek: The Next Generation,’’ who could always “sense anger’’ in aliens who were foaming at the mouth.)

Acting is tricky on a series like this; you have to try to squeeze humanity into lines that almost always consist of exposition. So it helps if your persona is quirky, as with Linda Hunt, who plays an agency administrator with more than a few shades of James Bond’s Q. Alternately, you could be LL Cool J, who is effortlessly appealing onscreen, perhaps because he doesn’t seem to take anything too seriously. He sails breezily through every scene with a faint smile on his face, reciting wisecracks and showing off his formidable biceps.

O’Donnell works harder, and has the harder job, as the requisite brooding dark horse, a crime-solving savant who shoots to kill but looks distressed about it afterward. We learn, in short order, that he is returning from a leave after having been shot on duty; that he grew up an orphan; that he is not a clothes horse; and that his past is so mysterious that he claims to know only his first initial, “G.’’

O’Donnell is a tricky guy to watch. He’s almost absurdly handsome, yet still somehow unsatisfying - the guy who’s perfect on paper, but still winds up losing the girl to McDreamy. Fortunately, girls aren’t the issue here, which is why “NCIS: Los Angeles’’ will probably do just fine with CBS viewers. It’s all about the crimes, the technology, the guns, and, mostly about not having - or wanting - to think too much.

Joanna Weiss can be reached at weiss@ globe.com.