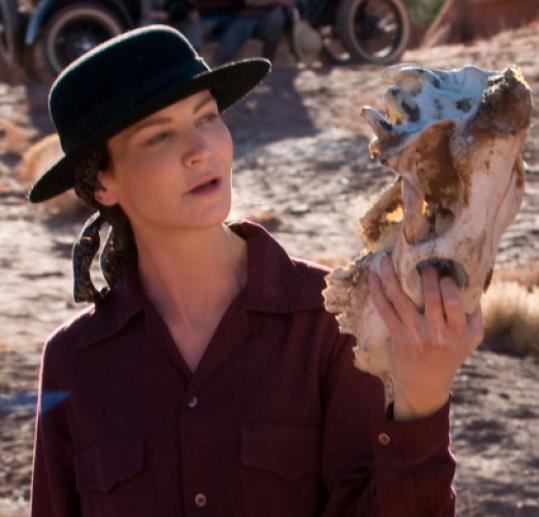 It’s hard to say why artist biopics are so dependably awful. They just are, and “Georgia O’Keeffe,’’ a workmanlike dramatization of the long affair between O’Keeffe and Alfred Stieglitz, sadly fails to break the mold.

Airing tonight at 9, the Lifetime TV movie stars Jeremy Irons as Stieglitz and Joan Allen (who is also one of the producers) as O’Keeffe. The two actors appeared together earlier this year on Broadway in Michael Jacobs’s ill-fated play, “Impressionism.’’ Here, they put in plucky performances. Irons in particular manages to transcend his typical, tired-eyed, cold-blooded persona, delivering a performance by turns comic and heartfelt, naive and calculating. He’s the saving grace of an otherwise unedifying melodrama.

Like all artist biopics, this one is sentimental about “art’’ while doing nothing to improve our understanding of the particular art it celebrates. O’Keeffe is already an artist when the story begins, so we get no sense of what led her to it. When she first meets Stieglitz, who has mounted a show of her works in his gallery without permission, there’s a confrontation. O’Keeffe demands that he take down the pictures.

Strangely, however, the film soft-pedals the scene, which in reality seems to have been stormier. Instead of a showdown, we watch a cool and collected O’Keeffe elegantly match wits with Stieglitz. Deftly, he converts her to his cause: “You have no more right to withhold these pictures than to withdraw a child from the world,’’ he says.

The story moves along at a steady pace. We get a sense of O’Keeffe’s ambition and pride - she is the first to flirt with the married Stieglitz - but also her vulnerability: “I’ve been terrified my whole life,’’ she confesses to him, although she insists that this has never stopped her from doing what she wanted. Allen was a fine choice to play O’Keeffe: She perfectly captures the artist’s combination of forbidding reserve and inner frailty. But her efforts are spoiled by a script lacking in subtlety.

Sadly, too many of the crucial lines feel canned: “I never assumed you were anything, except a great shining star I was hitching a ride on,’’ says O’Keeffe after one quarrel. And when O’Keeffe, who wants children, softly raises the subject, Stieglitz declares: “You were put on this earth to paint, not to breed.’’

The film - perhaps unfairly - skips over the likelihood that Stieglitz did not want children because his daughter, Kitty, had schizophrenia and Stieglitz did not want to risk passing the disease on to another child. It doesn’t deign to hint at one of the reasons for the lovers’ decision, in 1924, to marry: Kitty had broken off relations with Stieglitz when he started seeing O’Keeffe; she was institutionalized, and her doctors advised him that marrying O’Keeffe might help bring her back into the fold.

Later on, we watch the conflicts that arise when Stieglitz, a great impresario as well as a photographer, mounts a well-publicized show of his intimate portraits of O’Keeffe, including nudes that were shockingly frank for the time.

We also watch the entry of beautiful, 21-year-old Dorothy Norman (Jenny Gabrielle) into their world. Norman was married and had a new baby, although here, too, we are not told about the baby. Thus, we see Stieglitz quizzing her about her sex life in front of O’Keeffe, but we don’t see the more disconcerting behavior reported by Norman in her memoir: Stieglitz asking her if she had enough milk to nurse her child and, “gently and impersonally,’’ touching one of her breasts.

Perhaps it’s too much to expect a movie to do justice to the emotional and practical complexities of these bohemian affairs. Perhaps Lifetime felt some of the biographical facts were simply too kinky and inexplicable for their ironed-flat fable. Whatever the cause of their squeamishness, what we end up with is a well-acted soap opera.