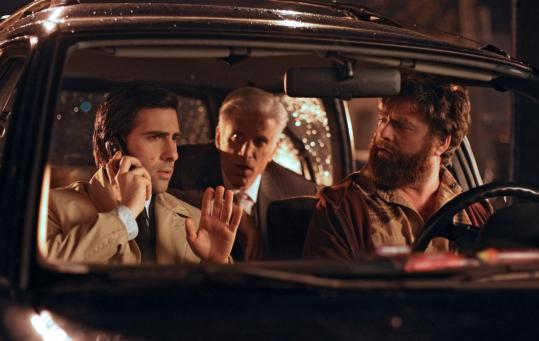 As Brooklyn writer Jonathan Ames in HBO’s amusing new series “Bored to Death,’’ Jason Schwartzman has a uniquely facial comedy style. Most of the area on his face stays stiff, in a guarded deadpan underneath his mop-top hair. But then his eyes are wide and expressive, like a silent-film actor signifying “wariness’’ to the audience. He also possesses rare comic timing, masterfully positioning his punch lines on the downbeat.

Schwartzman exists on the opposite side of the crazy coin from Larry David in “Curb Your Enthusiasm,’’ the show that precedes “Bored to Death’’ on Sunday night. While David brings the East Coast to LA as a raving obsessive who must always have the last word, Schwartzman cabs through Brooklyn and New York like a refugee from an indie movie. He’s melancholic, self-loathing, and lovable. Together, the obnoxious David and the muted Schwartzman - who broke through in the 1998 movie “Rushmore’’ - provide a really satisfying hour of Comic Neurosis TV.

Schwartzman’s Jonathan is loosely based on the real Jonathan Ames, who has ruthlessly and humorously chronicled his own most embarrassing moments, sexual experiences, and heartbreak. The more passive Jonathan in “Bored to Death,’’ which is executive-produced by Ames, has just been dumped by his girlfriend because he drinks too much white wine and smokes too much pot. A writer by trade, the grieving Jonathan becomes fixated on Raymond Chandler and impulsively advertises himself on Craigslist as a private eye. Most online fantasy projections involve sex, but for Jonathan the fantasy is about becoming a man of action and leaving his shame behind.

Really, though, the show is only minimally concerned with the P.I. premise, which recalls Woody Allen’s 1972 movie, “Play It Again, Sam,’’ as well as Andy Richter’s short-lived 2007 series, “Andy Barker, P.I.’’ “Bored to Death’’ never quite qualifies as a neo-noir, as it finds its real subject in smirking at the denizens of the Brooklyn coffee shops and the Manhattan literary parties that Jonathan stumbles through. He hangs out with his high-powered editor, George (Ted Danson), and his cartoonist friend, Ray (Zach Galifianakis), both of whom compensate for Jonathan’s sheepishness with verbal nattering of the most self-involved kind. They are parodies of narcissistic creative types, and in the hands of Danson and Galifianakis (from “The Hangover’’), they’re ridiculous fun.

Danson, who’s far more sober opposite David on “Curb Your Enthusiasm,’’ seems to be having a great time here. With his thick mane of white hair, which he vainly references in the third episode, George shares way too much information about his sex life and his ennui. In one scene, George asks Jonathan to punch him in the mouth to hide a herpes sore; in another, he explains why he thinks of all his organs as female. Galifianakis makes Ray into a cartoon of the unemployed artist; on a network sitcom, Ray would be the chubby slacker mascot in the ensemble of friends, but on “Bored to Death’’ he’s a lazy baby picking lint out of his navel.

I’m happy Schwartzman has found a vehicle that’s droll enough to capture his sensibility, but not too precious or willfully quirky. His previous foray in TV, Fox’s “Cracking Up,’’ was too broad to showcase his low-key gifts, and the movies in which he shines (such as Steve Martin’s “Shopgirl’’) are few and far between. He reminds me of a young Dustin Hoffman at times, but he has a more singular persona that can only flourish with sufficiently offbeat material. HBO sent out three advance episodes of “Bored to Death,’’ and by the third one (also the best one) I felt confident that Schwartzman was exactly where he belongs - in Brooklyn, in a cafe, watching, and worrying.