‘Community’ built around a strong cast 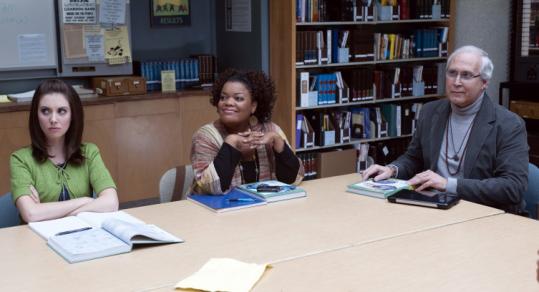 While NBC junks up prime time with second-rate reality contests, middling trauma dramas, and yet more talk-show blather, the network still has the touch when it comes to comedy. This fall, along with “30 Rock’’ and an improved “Parks and Recreation,’’ NBC is introducing a promising new Thursday night sitcom called “Community.’’ Look closely, and you’ll see hints of NBC’s once-decent reputation lingering in the fog of forgettability.

The tone of “Community,’’ which premieres tonight at 9:30 on Channel 7, matches that of its star, Joel McHale, host of E!’s “The Soup.’’ It’s cynical, mocking, self-mocking, and likable. Created by Dan Harmon of “The Sarah Silverman Program,’’ the show is overstuffed with political and pop culture jokes about everything from 9/11 to “The Breakfast Club,’’ but they’re always secondary to the warm ensemble character comedy. The free-floating irony isn’t terminal.

McHale plays Jeff Winger, an ambulance-chasing lawyer who has to attend community college to get the degree he lied about having. Stuck in a student body of losers including Chevy Chase’s dull businessman, he uses his professional powers to get what he wants. And in the premiere, what he wants are 1) to cheat his way to graduation and 2) to date the sardonic Britta (Gillian Jacobs). But he’s not very slick - he’s one of the losers, too. His schemes are fallible, and he’s given to idiotic observations. “I was raised on TV,’’ he says to an older black waitress, “and I was conditioned to believe that every black woman over 50 is a cosmic mentor.’’ Her response: “Were you conditioned to pay for your damn taco, Seinfield [sic]?’’

Jeff organizes a Spanish study club to lure Britta, and it turns into a kind of twisted group therapy. I think we’re supposed to be excited about the presence of Chase on “Community,’’ because of his comedy resume, but I found him the least engaging presence of all. Danny Pudi instantly won my heart as Abed, a very socially awkward guy who blurts out everything he’s thinking about himself and others. He’s an open book that Jeff would really like to close. Alison Brie gives her goody-two-shoes Annie an amusing Adderall-era twist. Donald Glover as the vain Troy scores the minute he calls Jeff “Seacrest.’’ And Jacobs, who looks a little like Robin Wright Penn, is the perfect romantic foil for McHale - as honest as he is sly.

One of the pleasing things about “Community’’ has to do with what it is not. The show doesn’t fit into any of the more familiar half-hour comedy formats on network TV right now - family sitcoms, workplace-family sitcoms, or friends-in-the-city sitcoms. It isn’t entirely formulaic. What else isn’t it? Another reason to moan about NBC’s fading quality.