Opening a new vein of angst and fangs 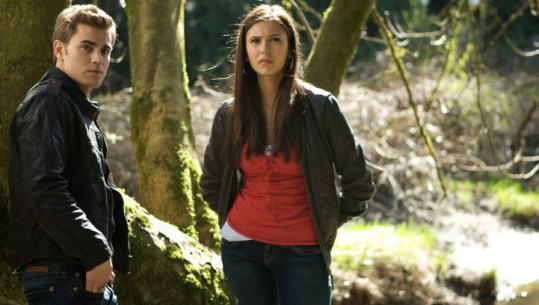 In the annals of pop culture’s undead, the most sympathetic vampires grieve their humanity. These lucky creatures are experiencing the dream of eternity; they will stay forever young. They’ve got exactly what the poets - and Hollywood stars - yearn for. And yet they long to feel romance, to nourish their souls in time. Unlike the more savage of their kind, they thirst for love even more than blood.

Naturally, the mildly alluring teen melodrama “The Vampire Diaries,’’ premiering tonight at 8 on Channel 56, revolves around one of these melancholy vamps. The angst of vampire immortality and the angst of high school cafeteria politics - they are a match made in heaven. Like Edward in “Twilight,’’ Stefan (Paul Wesley) of “The Vampire Diaries’’ is a dreamy-eyed guy with pale features and a dashing haircut. He has centuries ahead of him, all of which he’ll spend with the taut skin and thick eyebrows of a GQ model; but still he mopes at his desk in history class, his pupils dilated from so much brooding.

Based on the young-adult novels by L.J. Smith, “The Vampire Diaries’’ has been adapted for the CW by Kevin Williamson of “Dawson’s Creek,’’ a guy who certainly knows how to build up a soapy lather. The show definitely doesn’t have the script and style that made “Buffy the Vampire Slayer’’ stand above most supernatural series, nor does it have the cinematic vibrancy of “True Blood.’’ The pop allusions (to Carson Daly, Alfred Hitchcock) and the fog-machine-based production design are flat and unambitious. But “The Vampire Diaries’’ nonetheless satisfactorily opens up yet another TV world of heightened youth, where blood-sucking is a metaphor for a whole range of fears and desires.

Stefan has just returned to Mystic Falls, where he gently pursues a fellow student named Elena (Nina Dobrev), whose parents recently died. Their formal introduction occurs in a graveyard after school, although she doesn’t know he’s a vampire. The two share a deep, if morbid, connection, complicated by her still smitten ex-boyfriend and the needs of her kid brother, who has a drug problem. Also working against them: Stefan’s malevolent brother, Damon (Ian Somerhalder), who, true to his name, is quite demonic. Damon does what he can to trip up his brother, furious that Stefan refuses to feed on humans. “I promised you an eternity of misery, so I’m just keeping my word,’’ he yells at Stefan as he undermines Stefan’s efforts to blend into Mystic Falls. Will he pursue Elena, in the way the nefarious Eric has gone after Sookie in “True Blood’’?

Damon is unrepentant about his attacks on humans, which has its own strong appeal when it comes to vampire dramas. Yes, the tragic mien of the sensitive bloodsucker is touching, but sometimes tiresome. We feel for Stefan, but we’ve been known to root for Damon, too.