Even before launch, show’s cast has fans 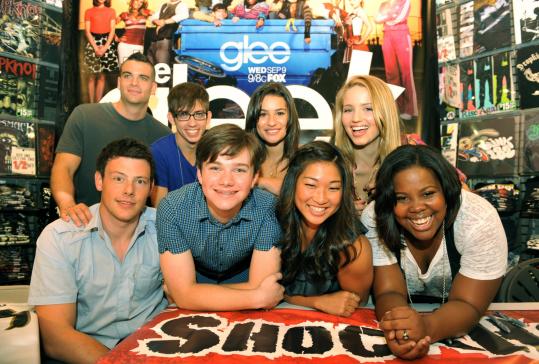 A gathering of the “Glee’’ cast (clockwise from top left: Mark Salling, Kevin McHale, Lea Michele, Dianna Agron, Amber Riley, Jenna Ushkowitz, Chris Colfer, and Cory Monteith) at the Natick Mall brought smiles, songs, and cheers from their fans and looks of surprise from the actors. (Photos By Gretchen Ertl for The Boston Globe)
By Sarah Rodman Globe Staff / August 30, 2009

NATICK - Cory Monteith is furiously snapping pictures of the crowd gathered outside the Hot Topic at the Natick Collection as if he’s going to need photographic evidence of its existence. On the other side of the glass, members of the throng take pictures of him taking pictures of them. The suburban hair dye and T-shirt emporium is the first stop on Monteith’s late summer cross-country tour with his fellow castmates to promote the new Fox musical comedy “Glee.’’

“I was in the car on the way here and I had that pang of terror: Are there going to be people there?’’ he says, sounding a note somewhere between relieved and incredulous that more than 300 people have lined up for a grip-and-grin with the cast after a single airing of the show, back in May.

This group of 300 fans, mostly teenagers - clad in recently purchased bright blue “Gleek’’ shirts that are the price of admission - isn’t just demurely waiting. The “Glee’’ geeks talk about favorite characters (Monteith’s crooning QB rates high). They erupt into screams as the cast is escorted past them into the store. And, eventually, as the wait ticks by, they burst into spontaneous song as lovers of musicals are prone to do. They sing “Seasons of Love’’ from “Rent’’ and “Don’t Stop Believin’ ’’ by Journey.

That they busted out the latter song is undoubtedly music to the ears of Fox executives, since the ’80s classic was featured in the pilot episode and the cast recording of the track topped the iTunes download chart shortly thereafter. The regular run of the series begins Sept 9.

“Glee’’ chronicles the adventures of a teacher trying to revive his championship high school glee club which is populated by lovable misfits who, despite their diverse clique affiliations, just want to sing. That first episode drew a strong, if not boffo, 9.6 million viewers in the spot after the first night of the “American Idol’’ finale. Fox decided to sit on the rest of the episodes until September, gambling on heightened anticipation.

This strategy puts the young cast in an unusual position. They’re largely unknown. But thanks to iTunes, social networking groups, online contests, and a screening of the pilot in movie theaters, they already have passionate fans. (Some of the people who attended the mall appearance hadn’t even seen the first episode yet, but were hooked on the songs.)

Could “Glee’’ become a “High School Musical’’-size sensation? The cast is jittery.

“We were prepared for the worst, so this is a shocker,’’ says Jenna Ushkowitz, who plays shy Tina, a stutterer with a flamboyant fashion sense.

She’s dubious about the proposition that should the show become a hit, she won’t be able to go to the mall in a few months. “I don’t know about that,’’ she says.

“I think we’ll just be happy that people will be seeing the work we’ve been doing,’’ says Kevin McHale, who channels his inner choir boy to play nerdy Artie.

Following the Hot Topic autograph session, the fans - already steeped in the cast’s credits - giddily ask questions. Lea Michele, who starred in “Spring Awakening’’ on Broadway, fields many of the queries.

“The great thing about ‘Glee’ is that young kids in high school will be able to watch it and say ‘Oh my gosh, I get that.’ It’s very relatable,’’ says Michele, who plays the driven and talented Rachel Berry.

At the mall, at least, fans have no doubt that “Glee’’ will be a hit.

“It caters to a group of kids that there aren’t really a lot of shows out there for,’’ says Marya Moylan, 19, of East Longmeadow.

Others, savvy in the ways of the TV industry, just hope it will be given enough time to find an audience. “Usually,’’ says Sarah Tota, 19, of Ashland, “Fox cancels shows easily.’’

Kevin Reilly, the network’s entertainment president, says Fox will be patient. Thirteen episodes are already in the can and he likes what he’s seen.

“It would be a really bad feeling if the episodes weren’t living up and [fan response] was building,’’ says Reilly. “I’ve been in that situation, and sometimes you’re nauseous because the expectations have gone beyond. But the quality of the work [on “Glee’’] is so good.