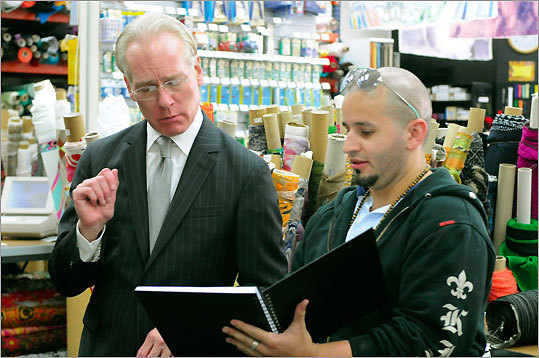 Fashion guru and judge Tim Gunn (left) checks on the progress of Johnny Sakalis, one of the contestants on the new season of "Project Runway." (Mike Yarish/Reuters/Lifetime Networks)
By Joanna Weiss Globe Staff / August 20, 2009

It’s hard to believe that nearly a year has passed since we last saw “Project Runway’’ - a year in which the fashion world gained Michelle Obama and (briefly) Sarah Palin, Michael Jackson’s glove was retired forever, and Tom DeLay shifted from right-wing sideline cultural critic to newly announced contestant on “Dancing With the Stars.’’

And yet, as TV executives know, some things are best left alone. So while the fashion contest has swapped Bravo for Lifetime and New York for Los Angeles, the fundamentals of the show, which premieres on its new home tonight at 10, haven’t changed a bit. The designers are just as self-aggrandizing and melodramatic, the workspace is just as tense, the product placement just as relentless. We still get to glimpse Heidi’s amazed/amused expressions as some of the more outrageous outfits saunter down the runway.

Based on the premiere - Lifetime sent critics a copy, but clipped off the judges’ comments - the new network has barely changed a thing, from the makeup of the judging panel (Klum, Michael Kors, Nina Garcia, and assorted guests) to the silhouette screen that’s used for dramatic effect in the runway show. Instead, the women’s network is working to expand the franchise; at 11 p.m. comes a spinoff called “Models of the Runway,’’ which extrapolates from the horrified looks that cross some models’ faces when they try on their designers’ work.

One positive change: The new “Runway’’ seems determined to make use of its new setting, milking Los Angeles for its self-perceived glamour. (There’s a bit of defensiveness involved; the cameras catch one contestant announcing that “LA’s garment district is, like, seven times bigger than New York’s.’’) At the start of tonight’s challenge, the designers step on the red carpet laid out for the Emmys - last year’s Emmys - and are tasked with designing gowns for the stars.

Starting off with ball gowns gives us a good chance to see what these designers are made of, even if too many of them are made of shimmery fabric in washed-out colors. We still get the range of self-made designers and pedigreed Vivienne Westwood interns, the proud guys who make declarations like “I don’t differentiate between different colored carpets,’’ the train-wreck contestants who are sewing their garments onto their models moments before the runway show.

This year’s standouts include a crowd-pleasing older man named Epperson who might or might not have the chops, and a woman named Ari who wears wildly patterned unitards and constructs a hooded halter dress from silver hexagons. To this, the inimitable Tim Gunn says, “I’m worried that it’s going to look like a halter diaper.’’

There’s as much Gunn as ever, if not more, in this new installment of the show, and that’s perhaps the wisest move of all: As Bravo’s less-inspired “Fashion Show’’ proved this spring, the success of a reality show rests as much on the on-air chemistry as it does on the tasks at hand. Take note, “American Idol’’ producers who just tossed out Paula Abdul.

Gunn, we’ve learned over the years, is absolutely crucial to this enterprise - as the teacher, the cheerleader, the voice of reason. When one designer asks him if her dress is over-the-top, he responds, “I don’t want you to ask me that. I want you to ask yourself that.’’ It’s the perfect advice for anyone undertaking a creative pursuit, which makes me think that Lifetime might have looked to Gunn for guidance when it refashioned “Runway’’ for its network. Either executives did a lot of soul-searching and decided to change nothing, or they let the show go on without thinking at all. Either way, they made the right move.