Cocktails and deception, straight up 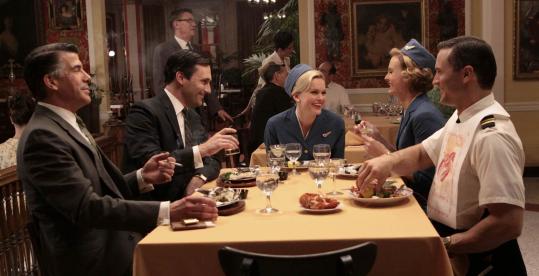 ’’Mad Men’’ is a perfect blend of the seductive and the abhorrent. On the one hand, it’s an absolutely gorgeous, amber-tinted vision of the early 1960s: swank apartments, knotty-pine kitchens, pegged skirts, bullet bras. Watching the AMC show, which returns in fine form for season 3 on Sunday at 10 p.m., you can’t help but drink in the dreamy look, detailed with enough 1950s-era accoutrements to seem authentically Camelot.

And yet, particularly to our post-1960s eyes, the themes of this Emmy-winning drama are deeply disturbing. “Mad Men’’ is a cold chronicle of cultural and gender oppression - imagine a Doris Day movie written by American Dream crusher Richard Yates, author of “Revolutionary Road.’’ From Sal (Bryan Batt), who stifles his gay nature, and Joan (Christina Hendricks), who’s set to marry the doctor who raped her, to Betty (January Jones), who deludes herself into domestic comfort, the “Mad Men’’ characters are dogged by the pressure to conform. They’re uncomfortably numb, often pickled in the ever-present whiskey.

And Don Draper (Jon Hamm) is a great embodiment of the show’s dual nature - simultaneously seductive and abhorrent. An articulate ad man with handsome Rock Hudson features, he can heighten the allure of the most pedestrian products with the flair of a poet. In the premiere, he turns London Fog coats into a global necessity with a few pretty words - “It is going to rain.’’ At home, using his hypnotic skills, he also talks the sleepless, pregnant Betty into a soothing fantasy about lying on a warm, sandy beach. “You’re good at this,’’ Betty coos. Indeed, Don has mastered appealing stories.

But he isn’t nearly as pretty on the inside. He lives at a distance from his experience, alien even to Betty and his children. He doesn’t commit to feelings, he just watches, waits, and works situations to his advantage. His facial structure is Rushmore solid, but his soul is ever-shifting. On Sunday, when he and Sal fly to Baltimore on business, Don shows Sal just how effortlessly one can weave an elaborate deception. Don, who began his life as Dick Whitman, improvises yet another identity on the airplane, to win a prize. Sal is awed - and educated - by Don’s easy craftiness. Don is so successful in advertising because he’s so fluent at casting spells on others.

Yes, “Mad Men’’ creator Matthew Weiner does invite us to sympathize with Don, whose childhood - the son of a prostitute, abused by the adults who raised him - was turbulent and unhappy. Sunday, as Don dolefully stirs milk on the electric stove, he painfully recalls the maternal nurturance that was denied him in his youth. It’s a touching moment. But Don has nonetheless grown into a duplicitous, hollow man, a fact that Hamm, with his miraculously subtle performance, makes both crystal clear and hard to accept.

One of the more promising developments this season is the presence on Madison Avenue of the British company that bought the Sterling Cooper ad agency last season. It’s the British Invasion, “Mad Men’’ style. Led by Lane Pryce, played with sly condescension by Jared Harris, the Brits at Sterling Cooper have little in common with the Americans and culture clash ensues. “You Americans don’t know how to handle your emotions,’’ says Pryce’s male secretary. “It’s unbecoming.’’ But it’s also amusing, as the transparent Pete Campbell (Vincent Kartheiser) bumbles his way through a private meeting with Pryce. Having uptight Brits on hand enables Weiner and his writers to put one of their favorite “Mad Men’’ themes - American repression - into a broader perspective.

Sunday’s hour is, like so many episodes of “Mad Men,’’ quiet on the surface. There are pauses in conversation, and almost no soundtrack music fills the silences and the emotional vacancies. And yet the subject matter of this show shouts at you the more you think about it, the more the characters don’t say what you know they are feeling. In even the smallest details - watch how a stick pin travels through the episode - “Mad Men’’ remains TV at its most artful. Like Don Draper, it’s beautiful, stealthy, troubling, and, above all, addictive.