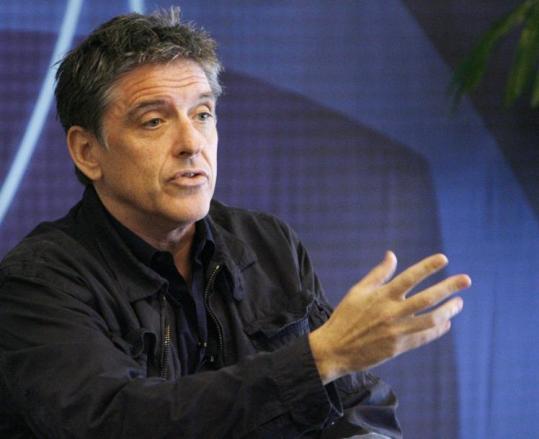 Craig Ferguson, host of “The Late Late Show,’’ has an autobiography coming out in the fall. (Fred Prouser/Reuters)
By Sarah Rodman Globe Staff / August 8, 2009

PASADENA, Calif. - Craig Ferguson jokes that he’s looking forward to reading his autobiography, “American on Purpose: The Improbable Adventures of an Unlikely Patriot,’’ out Sept. 22.

“It’s just the story of how I ended up here, which surprises me as much as anyone,’’ he said to television reporters at their biannual gathering here.

The host of “The Late Late Show,’’ which airs at 12:35 a.m. weeknights on CBS following “The Late Show With David Letterman,’’ is a native Scotsman and he spoke of the mixed feelings of great pride and melancholy he felt upon becoming a US citizen last year.

“There is a strangeness attached to leaving your past and making the new country your present, and I wanted to not shy away from that,’’ said Ferguson, also known to US audiences for his regular role on “The Drew Carey Show.’’ “It’s the defining thing of my own weltanschauung, if you like, that America, for me, is a philosophical and emotional decision and it’s not just jingoistic. I think it’s certainly not just political. It’s not a donkey or an elephant. It’s a flag and an idea. It’s a dream. It’s a belief in fairness of opportunity. It’s such an important thing for me that I have trouble making fun of it, which, that’s OK. Other people can do that.’’

The recently married host, who also covers his early years in a punk band and battles with substance abuse in the book, and jokingly referred to himself as a “sweaty vaudevillian,’’ spoke about his efforts to keep “The Late Late Show’’ fresh and not necessarily in the classic mold of the medium. “I think my show is probably closer to ‘Pee-wee’s Playhouse’ than anything else I’ve seen, and that is an aspiration,’’ he said. “I don’t know where we are, but wherever we are, we won’t be that next week. I do know that.’’

He confessed a half-blissful, half-frustrated ignorance of the way ratings work and a continued admiration for his boss and lead-in, Letterman, whose production company produces Ferguson’s show.

“David Letterman is the king of late-night television. Now, I know there are press releases and other people that can prove to you scientifically that that’s not [expletive] true, but I’m telling you that’s true,’’ he said emphatically, referring to the ongoing parsing of ratings figures between Letterman’s show and “The Tonight Show With Conan O’Brien.’’ “My relationship with David Letterman is that I sit at his feet.’’

When asked what he dreamed he’d be when he grew up, Ferguson said “I always half expected I’d end up doing something in show business because it was tolerant of drunkenness and you could meet girls. But, you know, I’m married, and I’m ‘teetotals,’ but I’m still here because I don’t know where else to go.’’