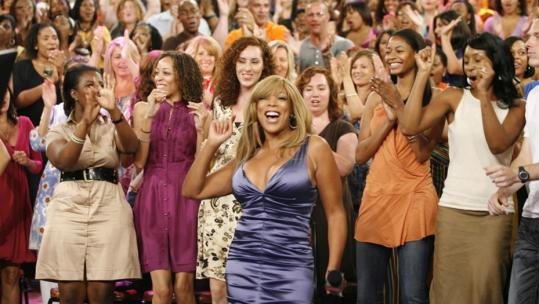 Wendy Williams has given up radio to concentrate on her television show. (Alan Diaz/Associated Press)
By Joanna Weiss Globe Staff / July 27, 2009

It takes a certain level of chutzpah to create your own catchphrase, but Wendy Williams did not get where she is without chutzpah. The larger-than-life talk show host - 6 feet tall, with a penchant for heels and a pair of artificially enhanced breasts - exudes a particular joy when she coos, “How you doin’,’’ elongating the words so that it sounds more like “Howyoudoinnnnn.’’ The phrase started, during Williams’s long radio career, as a euphemism for gay men, but has since evolved into a catch-all greeting, an inside joke with her audience.

There’s a facial expression that comes with it, too, sleepy-eyed and slack-jawed, and it’s now officially part of the Wendy Williams experience. Last week, Williams announced that she was giving up her FM gig to concentrate solely on the syndicated “Wendy Williams Show,’’ which airs weekdays at 2 p.m. on Channel 56.

Being on TV “is truly a dream,’’ Williams said. She wants all of us to see all of her.

Williams’s TV show is structured like ABC’s gabfest “The View,’’ but it’s a bawdier version, set beneath disco balls, with a theme song that invites the audience to whoop. If “The View’’ amounts to eavesdropping on a ladies’ brunch at the Four Seasons, “Wendy Williams’’ is like inviting your outrageous girlfriend to share a double chocolate cheesecake at T.G.I. Friday’s.

Williams has her own “Hot Topics’’ segment - limited to celebrity gossip and delivered on a circle of leopard-print flooring - and invites audience members to share their own observations. (Many start by heartily saying, “Howyoudoinnnnn’, which Williams heartily repeats back.) She interviews celebrities on a couch and cooks with guest chefs in a makeshift kitchen. In a segment called “Ask Wendy,’’ she winds her way through the audience, offering authoritative advice on the subject of boyfriends, husbands, and general etiquette.

Williams made her reputation in part through conflict - a contentious radio interview with Whitney Houston in 2003, a scathing back-and-forth last summer, in a trial-run of her TV show, with professional beeyotch Omarosa. She does not hesitate to pass judgment on celebrities. But as she perches on her stool, her voluminous breasts aimed directly at the camera, she doesn’t come off as mean.

Maybe that’s because she brings a radio sensibility to her performance, an off-the-cuff buoyancy required of someone who has to fill a lot of dead air. Williams is just unpolished enough to feel completely real: She speaks in a Jersey accent, stumbles endearingly over her phrasing, and sometimes gives the impression that she’s talking completely off the top of her head. She swats at gnats that wander onto the set. At one point last week, she confused the word “coquette’’ with “croquette,’’ then brushed it off by saying, “Now I’m hungry.’’

Helming a talk show is, to some degree, a matter of figuring out how much to share. Ellen DeGeneres has been known to cry about her love for dogs. Rosie O’Donnell described her personal relationships, almost as a dare. Williams’s honesty is more visceral; she’s real about being fake. She admits to Botox treatments. She shifts her wig back and forth on the top of her head. She refers to herself as “a fattie.’’ In one show last week, she said some viewers had complained that she was turning to the side during her “Hot Topics’’ segment, to look at notes on pieces of paper. But if she held the papers in front of her, Williams complained, “Then I feel like I’m covering my ensemble!’’ She pointed at her chest, and the crowd hooted approvingly. They want to see all of her, too.