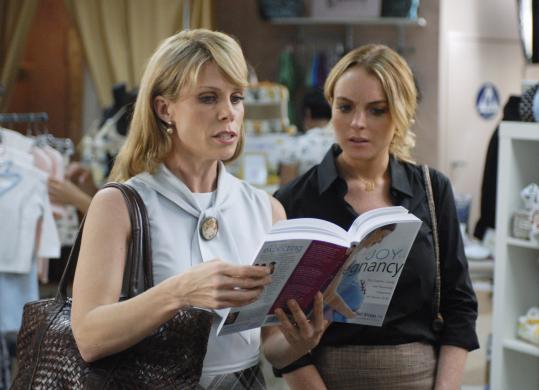 When news first broke that “Labor Pains,’’ the Lindsay Lohan movie intended for theatrical release, would premiere on cable television instead, the gossip world buzzed about the decline of Lohan’s career.

But it’s hard to blame Lohan entirely for the hour and a half of mediocrity that appears Sunday night at 8 on ABC Family, a story about pregnancy and the publishing industry that willfully ignores the actual workings of either.

Lohan plays Thea Clayhill, a hardworking and generally responsible daughter of deceased parents, who supports her younger sister by working as a secretary at a Los Angeles publishing house. It’s a miserable life; her boss makes her wash poop off his beloved dog, and she has to give up her seat on the bus to a pregnant woman one day. But she needs the job, so when her boss tries to fire her, she blurts out that she’s expecting a baby. The legal department swiftly ensures that her job is safe. To let her go in her delicate condition, it seems, would invite a discrimination suit.

Thea skipped college for her sister’s sake, and apparently missed out on high school biology, too; at first, she thinks her lie will simply “blow over’’ in a couple of days. Instead, her faux pregnancy turns out to be the source of office fascination, not to mention a boon for her career. First, she’s brought along to woo a pregnant writer with a brilliant manuscript. When that goes inexplicably well, she’s promoted to editor and given control over a new division of family books. So she straps on a fake belly - stolen from a maternity clothing store, but who’s to quibble? - and carries on the predictable charade.

The manuscript at the center of the story is birthed in record time, and we’re constantly told how brilliant it is: a surprising and funny series of tales about what pregnancy is really like. But save for a few offhand jokes about farting, none of that insight or humor makes it into the movie. Very little here feels original or even pregnancy-specific, from the farcically miserable boss (Chris Parnell, uncharacteristically unfunny, even when playing off a small dog) to the sassy best friend (Cheryl Hines, trying her best and smoking up a storm) to the see-it-from-a-mile-away office romance that threatens to unravel once the truth is revealed. The high point, for fascination’s sake if nothing else, is the performance of former “American Idol’’ contestant Kevin Covais, who convincingly plays a brown-nosing intern on to Thea’s lie.

How is Lohan? She looks passably sober and relatively wholesome - her clothes cover all of her body parts, which is an improvement over past appearances. Still, she looks to be coasting through a part that requires little effort, anyway. She might be carrying this movie, but she’s carrying low.