The brilliance behind SpongeBob 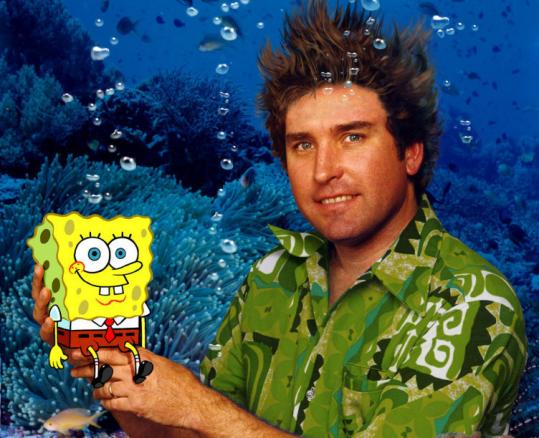 Tom Kenny, who voices the character of “SpongeBob SquarePants,’’ says the show’s creator, Steve Hillenburg, is a prime lesson in the importance of following your passions. Hillenburg was working as a marine biologist, but he returned to school to study experimental animation after he realized he didn’t want to leave art behind. Now, Hillenburg is surely the most famous marine cartoonist on land or sea.

As the Nickelodeon show celebrates its 10th anniversary, we caught up with Hillenburg to discuss innocence (SpongeBob), avarice (Mr. Krabs), and the glories of making a cartoon that’s part Laurel and Hardy, part Jacques Cousteau.

Q. So 10 years in, how does it feel to hit that milestone?

A. I never imagined working on the show to this date and this long. It never was possible to conceive that. . . . I really figured we might get a season and a cult following, and that might be it.

Q. When did you become convinced that the show was beyond short-term cult status?

A. By the third season, it felt like [we had] a solid fan base, and the show was kind of clicking on all levels.

Q. With an underwater sponge for a star, perhaps no show is more acutely aware of - creatively - not wanting to “jump the shark.’’ Is that something you’ve been conscious of?

A. Well, there was concern when we did the movie (in 2004) that the show had peaked. There were concerns among executives at Nickelodeon.

Q. You studied marine biology before going to CalArts for animation. Had you always been interested in animation, though?

A. Hugely. I definitely was interested and became real interested [when I started going] to animation festivals. I went to the Tournee festival and the Spike & Mike festival in the ’80s right before. I was working at Ocean Institute - I was a marine biologist, but I was trying to figure out [how to get to] art school. It was at those festivals . . . I thought: This is what I want to do.

Q. How did you decide on the lengths of your episodes - two episodes per half-hour?

A. I always pushed back on doing long-form. I imagined SpongeBob as being simple and I wanted to concentrate on character humor. I never wanted to deliberately try to write a half-hour show. The show wasn’t compromised by length - I don’t think SpongeBob works in long-form.

Q. Were any particular influences at work when developing this comic approach to the film?

A. I think “SpongeBob’’ is born out of my love of Laurel and Hardy shorts. You’ve got that kind of idiot-buddy situation - that was a huge influence. SpongeBob was inspired by that kind of character: the Innocent - a la Stan Laurel.